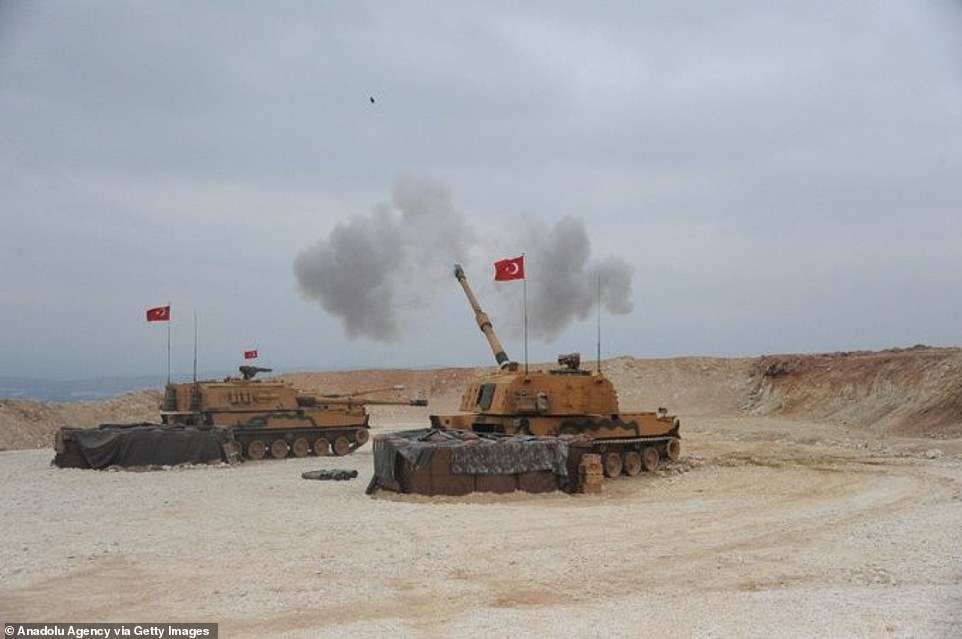 The Turkish push into northeastern Syria started with the aim of conquering three border towns, Ras al-Ayn, Tel Abyad and Ain al Issa, held by the Kurdish-led Syrian Democratic Forces (SDF). By Saturday, Oct. 12, Day 4, that triple object proved beyond the Turkish army’s strength without bringing in substantial foot and armored reinforcements and incurring many casualties, say DEBKAfile’s military sources. Turkey therefore decided to start with two targets, grabbing the outskirts of Ras al-Ayn and sections of the key M4 highway near Ain al Issa. (On Saturday afternoon, Turkish sources claimed that the town had fallen.) If Ras al-Ayn was really in their hands, which other sources deny, Turkish troops would be able to surround and overwhelm the SDF force defending the town of Kobani.

To prevent this happening, the US last week sent a small Marine force to take up position in the northeast town of Kobani and on the hill overlooking the M4. On Friday, this force came under Turkish artillery fire, which caused no harm. Turkey claimed it was “a mistake,” which is hard to believe since the Turkish officers have detailed maps of the locations of US forces in the region. At all events, by Saturday, M4 had not been captured by the Turks.

The tactic employed by the Turkish high command, given the small number of troops provided for Recep Edrogan’s Peace Spring Operation, is to aim for an important local victory in one sector, before moving on. The SDF have, in contrast, opened up five separate fronts on the Syrian-Turkish border and were shelling Turkish border villages and towns. There have been scores of casualties on both sides, and tens of thousands of refugees fleeing affected locations, but none of the various figures published are credible.
The Turkish-Kurdish contest has so far refrained from more than exploratory skirmishes, say DEBKAfile’s military and intelligence sources. The coming days will reveal whether it is likely to develop into a long-term confrontation. Some 140,000 well-armed SDF Kurdish fighters are dug in along a 300km front east of the River Euphrates. They have set up a defense line which is heavily fortified and barricaded, studded with anti-tank traps and supplied with plentiful ammo stores.

The Turkish force in Syria are present is too small to tackle this Kurdish force. To raise an army equal to the task of smashing the Kurds, Turkey would need a large-scale military call-up, and even then, might be short of manpower for the task. The Turks are further constrained by the refusal of both the US and Russia to allow their air force to operate in northern Syrian air space, thereby hobbling their ability to advance very far across the Euphrates.
Erdogan’s operation has been severely limited by Washington and Moscow to establishing a 200km-long, 30km-deep, safe zone along a section of the Syrian-Turkish border, from which most SDF forces were withdrawn last September. This was agreed in a phone conversation President Donald Trump held with Erdogan last Saturday, Oct. 5.

But the Turkish president has a more ambitious plan. He wants to make it impossible for Syria’s Kurds to establish an autonomous state. That objective is still way out of Ankara’s reach. Even its initial foray is hedged around by restrictions and deadlines. Turkey’s generals have no more than four or five days to achieve their first objective, before US lawmakers endorse sanctions against Erdogan, his generals and the Turkish economy. Pressure is ramping up on President Trump, including from his own Republican Party, to stop the Turkish operation in Syria.
Another date looming is Nov. 13, when Trump and Erdogan have scheduled a meeting.

In the coming weeks, too, the process may be kicked off for Syrian President Bashar Assad and SDF leaders to conclude a military pact that opens the door for Syrian military forces to enter Kurdish territory. Initial contacts to prepare these negotiations are underway. President Vladimir Putin is all in favor of any steps that restore the Assad regime’s authority to all parts of country.

These and other events yet to come take some of the steam out of the Turkish ruler’s belligerent threats and the Kurds’ cries of an imminent slaughter, (which also serve Binyamin Netanyahu’s rivals as campaign fodder for drawing a straight line from Donald Trump’s putative desertion of the Syrian Kurds and Israel’s low expectations from his friend in the White House).

As matters stand now, there are no signs of an imminent Kurdish collapse in the early stages of the Turkish thrust into northeast Syria. They are well prepared for war with the Turkish army and, armed with good stocks of US-supplied weapons, are pursuing the correct tactics for meeting the current threat.