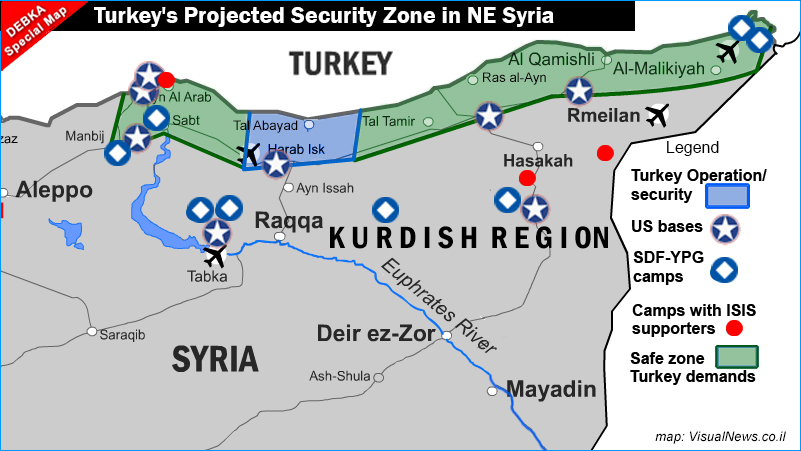 As President Recep Erdogan announced the start of a Turkish operation in northeastern Syria on Wednesday, Oct. 9, the Kurdish-led SDF reported that Turkish warplanes were striking civilian areas. Erdogan stated that he wants to create “a safe haven cleared of Kurdish militias to house a million Syrian refugees.”

DEBKAfile’s military sources report that the Turkish army’s short-term goal is to establish a 100km long security belt, 30km deep, along the Syrian-Turkish border. (See attached map.) At the moment, Turkish air strikes are directed against Kurdish YPG militia’s bases and ammunition stores, while shelling them from across the border. The Turkish air force is also bombing Ras al-Ayn in the Hasakeh region east of the River Euphrates. Turkish ground forces and tanks crossed into Syria Wednesday night.
Kurdish reports of Turkish aerial bombardment appeared to be inflated in the hope of bringing the Americans to their aid before the Turkish army crossed over. In the initial stage of the offensive, our military sources don’t expect Erdogan to overshoot the limits of the security zone, on whose creation he and President Donald Trump agreed in their phone call on Saturday, Oct. 7. It was after that call, that Trump announced the withdrawal of around 100 US troops from two observation posts in northeast Syria out of the way of the Turkish plan. This decision was sharply and widely criticized. He also warned Erdogan that he would “obliterate” the Turkish economic if the Kurds were attacked.

There were a number of military movements related to Syria in the course of Yom Kippur: