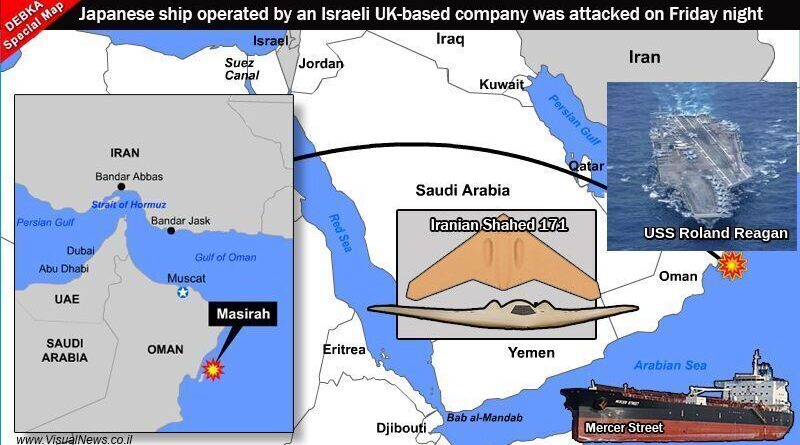 The US Central Command has assigned the USS Ronald Reagan aircraft carrier and USS Mitscher guided missile destroyer to escorting the stricken Israeli-operated Mercer Street merchant ship to safe harbor, DEBKAfile reported on Saturday night, July 31. The CENTCOM release reports clear indications that the Japanese ship operated by an Israeli UK-based company was attacked on Friday night by a UAV. The US warships are accompanying the Mercer Street “to ensure there is no additional danger to the crew,” two of whom, a Briton and a Romanian, were killed in the kamikaze drone attack off Oman in the Indian Ocean for which Iran is held responsible. US explosives experts are on board the vessel to support the investigation into the attack.

DEBKAfile’s military sources add that, although no Americans were aboard the Israeli vessel, the Americans have gone to extraordinary lengths to secure it. The  Ronald Reagan and the 90 jets and combat helicopters on its decks were chosen to safeguard a single commercial vessel. This may indicate intelligence that Tehran intends to finish the job with a second drone attack, this time to scuttle it. It is not ruled out that Iran’s unprecedented drone strike presages a new suicide drone campaign for harassing more civilian sea traffic. In any case, America’s claim to world power status obliges the Biden administration to demonstrate its ability to secure the freedom of navigation in waters as crucial to world trade as the Gulf of Oman and the Indian Ocean.

Defense Minister Benny Gantz vowed an “appropriate response” to the attack on the Mercer Street. Any action against Iran will almost certainly be coordinated with CENTCOM.