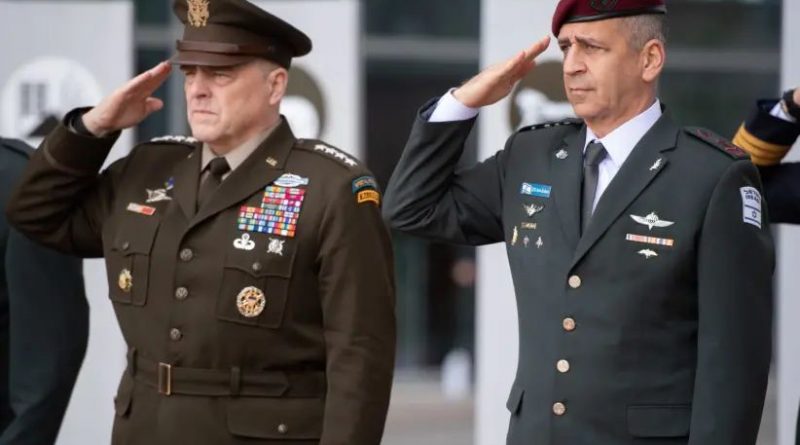 As the US military takes up new positions against Iran on the Syria-Iraq border, a major Mid East event seems to be brewing, with a key role for Israel. This is strongly indicated by the comings and goings of top US officials this weekend. Gen. Mark Milley, Chairman of the US Chiefs of Staff, is in Israel as the guest of Israel’s chief of staff Lt. Gen. Aviv Kochavi. On Saturday, Nov. 213, the commander of US CENTCOM, Gen. Kenneth McKenzie predicted that Iran will probably launch another attack in the Middle East.  At a regional conference in Manama, Bahrain, McKenzie said that although 14,000 additional US soldiers were deployed in the Persian Gulf since the spring, they did not deter Iran from attacking a Saudi oil field.

On Saturday too, Vice President Mike Pence paid an unannounced trip to Iraq for a special briefing on the situation on the Syrian-Iraqi border at the US Al-Asad Air Base. These movements came after the top-secret Israeli air strike last Tuesday, Nov. 19, on a mysterious Iranian target near the Syrian town of Abu Kamal close to the Iraqi border. Neither Israel nor Iran revealed what that was about except to admit that it occurred.

Most significantly, Pence chose to arrive in Iraq at Irbil, capital of the semiautonomous Kurdish Republic (KRG), rather than Baghdad and the first person he met was the KRG’s president Nachirvan Barzani. He only put in a brief phone call to Iraqi Prime Minister Adel Abdul-Mahdi.

The vice president’s actions signified the revival of the US-Kurdish alliance – not just with the Syrian branch but also with their Iraqi brethren. Indeed, the outcry over the Trump administration’s desertion of the Syrian Kurds in the wake of the Turkish invasion earlier this month neatly camouflaged the substantial influx of US troops arriving in the Kurdish regions of eastern Syria this month. American encampments there, far from being evacuated, have been substantially augmented by new military facilities, two of them air bases.

DEBKAfile’s military sources have learned that US engineering units are erecting one new base near Al Sur in the Deir Ez-Zour region and another near the town of Amuda. Those bases are partly designed to counter the Russian air force’s establishment of a military air base in the Kurdish town of Qamishli, so that the US does not lose control of northeastern Syria near the Iraqi border to Moscow. However, the newly boosted US deployment in that corner of Syria has a more pressing mission. As Tehran tightens its grip on Baghdad and its Revolutionary Guards elite Al Qods Brigades take over command of the Iraqi Shiite militias stationed on the Iraqi-Syrian border, this part of Syria gains in strategic importance. The topped-up US military presence is becoming the only real obstruction for preventing Iran creating a direct bridge between its forces in Iraq, Syria and Hizballah in Lebanon.

On this point, American and Israel’s strategic interests converge, especially when both anticipate hostilities exploding in this part of the Syria-Iraq border in the near future, and the importance of this region growing in the coming weeks and months. The talks the top US soldier, Gen. Milley conducted in Israel no doubt focused on the Israel Defense Forces’ role in these events.