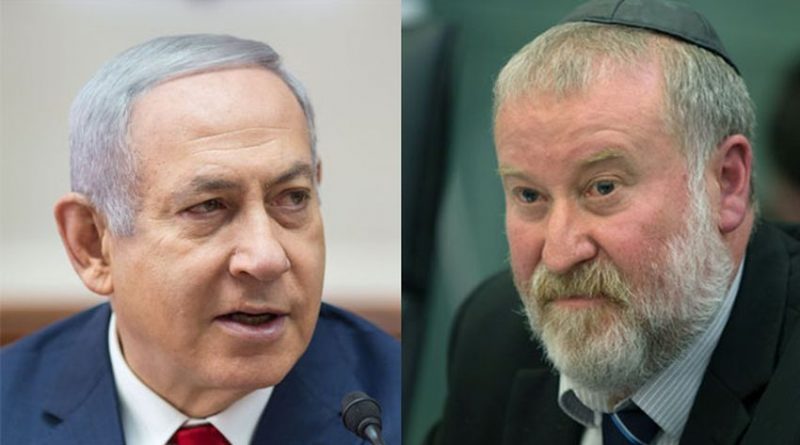 PM Binyamin Netanyahu sharply rebutted the Attorney General Amihai Mandlblit’s decision to indict him on charges of bribery, fraud and breach of faith. He accused  law enforcement authorities of conducting “a polluted, tendentious inquiry” designed to set him up personally “or removal as prime minister.” Netanyahu vowed he would continue to lead the country unless forced out by a High Court petition. He accused the police and prosecution systems of years of legal abuse, citing examples. The people have lost faith in the law enforcement authorities, he said. They deserve a decent, law-abiding system, and demanded that an external, nonpartisan commission of inquiry investigate the investigators and clean up the system.

Mandelblit earlier laid out in a public press conference his reasoning for deciding to indict the prime minister, saying he did so with a heavy heart but in full conviction that he was performing his duty.

Netanyahu fired back by charging police investigators backed by chief prosecutor Shay Nitzan of building their case against him by extorting lying admissions from witnesses by threats against their families. They should be brought to trial.

In a powerful fighting speech, Netanyahu said he was proud of what he had achieved for the country as its prime minister and vowed to continue. He promised to roll up his sleeves to persuade the voter in the coming election to make an honest decision to stand by him instead of those sworn to bring him down.

Attorney General Amihai Mendelblit came to an earth-shattering decision on Thursday, Nov. 21 to prosecute Binyamin Netanyahu for bribery – the first such indictment ever brought against a sitting Israeli prime minister. The case against Netanyahu consists of three indictments:  bribery, fraud and breach of faith under File No. 4,000, fraud and breach of faith under Files 1000 and 2000.
The AG has passed copies of the files to the Knesset Speaker in the event of the prime minister seeking to invoke the law permitting him to apply for immunity while in office against trial for a criminal offense.

File 4000 Bezeg-Walla charges Mr and Mrs. Shaul Elovich with bribing the prime minister, and obstruction of justice. Elovich is accused of ordering the Walla news site to offer Netanyahu favorable coverage in return for alleged concessions to the Bezeq corporation, which he owned. In File 2000, Arnon Mozes, proprietor and editor of the large-circulation Yediot Aharonot, is accused of offering to bribe the prime minister, which he did not accept although negotiations continued. File 1000 alleges that the prime minster inappropriately received a steady flow of cigars and champagne worth thousands of shekels from a rich friend.

The Justice Ministry announced that the AG’s decision followed an exhaustive hearing of the prime minister’s attorneys in October and a thorough investigation of all their claims in his defense. The prosecution’s conclusions, covering hundreds of pages, were that none of the facts and arguments presented in that hearing were relevant for altering its decisions regarding the allegations against the prime minister. The AG insisted that there were no grounds to claim that because no money changed hands, bribery had not occurred.

72 thoughts on “Netanyahu: I will continue to lead the country in face of an attempted coup by the law enforcement arm”