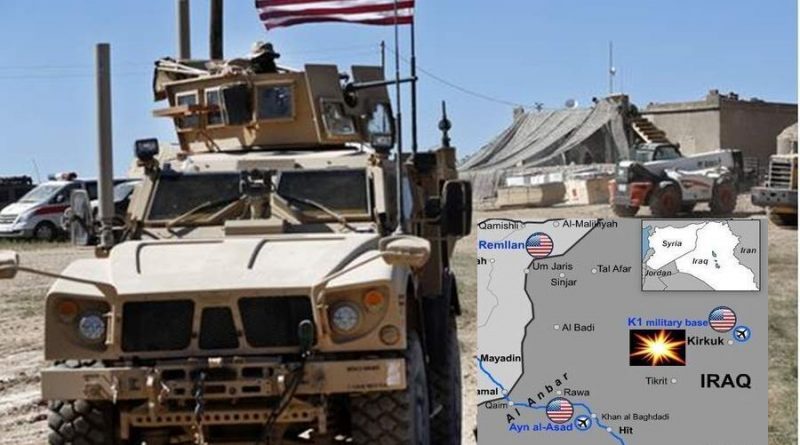 At least 30 rockets launched against the US K-1 base near the oil city of Kirkuk in northern Iraq on Friday, Dec. 27, killed an American civilian contractor and injured 4 US soldiers. Some 11 to 14 exploded inside the base; the rest outside. They were fired from rocket-launching trucks parked outside the facility. The crews then abandoned the launchpads and took off in waiting getaway vehicles.

DEBKAfile’s military sources report that analysis of the shrapnel quickly identified the Iranian-made rockets that are supplied to their Iraqi proxy, the Popular Mobilization Units (PMU), whose commander Abu Mahdi al-Muhandis, is a deputy of Al Qods-chief Gen. Qassem Soleimani.

According to our sources, the PMU rocket attack was Iran’s punishment for the month-long US aerial offensive for breaking up the Iraqi Shiite militia concentrations around Abu Kamal and Deir ez-Zour near the Syrian border with Iraq, According to a division of labor, the US Air Force has targeted the  Der ez-Zour contingents and Israel, the units present around Abu Kamal and up to Palmyra.

Urgent consultations began in Washington on Saturday for a decision on how and when the US should retaliate for the attack on the K-1 base. The US maintains some 5,000 troops in Iraq.

On Dec. 13, Secretary of State Mike Pompeo issued a strong warning that any attack by Iran or its proxies that “harm Americans, our allies or our interests will be answered with a decisive US response.” He was reacting to more than 10 rocket and mortar attacks against US military facilities in Iraq and the US embassy compound in Baghdad. Three days later, Defense Secretary Mark Esper repeated this warning in a conversation with Iraqi prime minister Adel Abdul-Mahdi. Not much can be expected from Baghdad since both the prime minister and this week the president have handed in their resignations over the turmoil generated by two months of protests that have paralyzed government.

DEBKAfile’s military sources note that while Iran retaliates habitually for US air strikes on its military facilities and those of its proxies in Syria, Tehran has so far mostly avoided responding in kind to Israel’s air campaign.

82 thoughts on “An American killed, 4 injured in heavy Iraqi Shiite rocket strike on US K-1 base near Kirkuk”