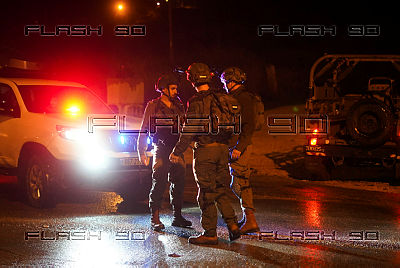 The 10 bullets that sprayed the car outside Homesh in northern Samaria on Thursday night, Dec. 16, killed Yehuda Dimentman, 25, yeshiva student, and injured two other students in the car. He is survived by a wife and 9-month-old baby. Three IDF battalions, scouring northern Samaria for the two Palestinian gunmen, have detained several suspects for questioning.

The driver Aviah Entman, who survived the attack, reported that as soon as the gunshots were heard, he raced the car towards Shavei Shomron, while calling for aid. The terrorists are believed to have laid in wait for their victims in bushes outside Homesh and then opened fire at close range.

While Palestinian knifing and car-ramming attacks have escalated in recent weeks, this was the second terrorist shooting attack. On Nov. 21, a Hamas gunman in the Old City of Jerusalem murdered killed South African-born Israeli tour guide Eli Kay, 26.

An Israeli man took a bullet to the throat and two of his companions were injured when their car came under gunfire Thursday night, Dec. 16, on a road leading out of Homesh west of Nablus. A medical team made an all-out effort to stabilize his condition before evacuating him to hospital but failed to save his life. The two wounded men were driven by ambulance to hospital. Military and security forces mounted an urgent manhunt for two Palestinian gunmen believed to have ambushed the Israel vehicle, closing roads and setting up roadblocks. Information has been received in recent weeks of advanced plans by Palestinian extremist groups to escalate their anti-Israel campaign of terror to shooting attacks.

The three victims were students of the Homesh Yeshiva, which was set up without a permit at a site in northern Samaria that Israel evacuated when it disengaged from the Gaza Strip.