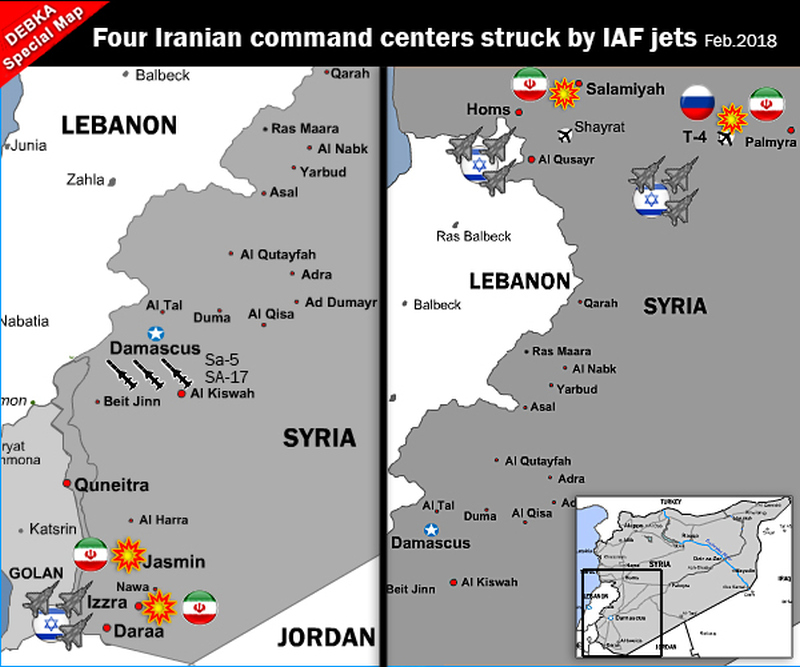 In July 2017, Presidents Donald Trump and Vladimir Putin agreed in a brief encounter on the sidelines of the G20 Munich conference to establish three de-escalation zones in Syria for a start on clearing the way for the country’s transition from war to a political settlement. Trump met Putin more than halfway when he conceded that Russia, Turkey and Iran would jointly monitor the three zones, with no role for the United States.

Eight months later, the dynamic of the Syrian conflict has shifted ominously. The new game has US forces confronting Iranian-Syrian eastward expansion and finding Russians in their path. This happened last week, when US forces pushing back on an Assad-Iranian-Hizballah drive east killed large numbers of Russian “mercenaries.” The understanding they reached earlier has melted away and the next US-Russian testing ground is being laid, DEBKA Weekly’s military sources report, at the southern province of Daraa on the Jordanian border, which the Munich summit labeled the first of the three deconfliction zones. (See attached map)

It was President Trump’s hope that his understanding with Putin would keep Jordanian and Israeli borders safe from Iranian, Hizballah and Syrian army encroachment and secure America’s sphere of influence in an area east of the Euphrates River. The river was established as a separation line by Presidents Barack Obama and Putin in 2015 at the outset of Russia’s military intervention in the Syrian war.

But the Syrian war landscape today has radically changed in more ways than one: ISIS has been crushed militarily; most of the Syrian rebel groups have fallen apart; the Assad regime has recovered large swaths of land, with the help of Iran, Hizballah and Russia (using air power and private military contractors). Russia, Iran, Assad and Hizballah believe their winning streak is such that they can be sure of ruling the roost when the war is over.

But that is where Trump is digging in for a fight. As DEBKA Weekly 788 reported on Feb. 2, he decided to nip in the bud Secretary of State Rex Tillerson’s quiet effort to negotiate an understanding with Russia and Europe, that would have entailed forcing Iran to abandon its military foothold in Syria. Instead, President Trump opted in favor of the CIA Director Mike Pompeo’s recommendation of an active policy in Syria – even if this meant a confrontation with Russia.

Many Middle East political and military figures this week mistakenly mourned America’s abandonment of Syria, although the opposite has happened. The Trump administration has decided to retain US forces in Syria to safeguard American interests and is determined to hold onto the eastern region that controls the 1,000km long frontier with Iraq – from the Syrian-Iraqi-Jordanian border triangle in the south up to the Syrian-Iraqi-Turkish border intersection in the north. The State Department’s Syria policy announced last month that US bases will remain, among other goals, until “Iranian influence in Syria is diminished, and Syria’s neighbors are secure from all threats emanating from Syria.”

Trump, Defense Secretary Jim Mattis, and the head of the National Security Council, HR McMaster, are squarely behind this policy, because it is also the key to any chance of stability in Iraq, especially in view of the coming elections.

As US forces battled last week to hold back Syrian and Iranian-supported militias from breaking through the American line and reaching the border, the Trump administration showed its willingness to use military strength in support of its policy – even at the price of a clash with Russia.

This firm US stance puts paid to Tehran’s vision of cutting a land corridor through Iraq to Syria, Lebanon and the Mediterranean, for dominating Damascus and a direct link with its most important proxy, Hizballah. It also frustrates Assad, who sees one-third of his country in the east and west is in the hands of the US military and its ally the Kurdish YPG militia.

As for Putin, he knows he needs Trump’s say-so and support for making progress towards his objective of leading Syria to a political transition out of war. On the other hand, he is not rushing to dump his military and political alliance with Tehran and collaboration with Assad. For now, he is paying his dues to this trilateral club by abetting moves Iran, Hizballah and Assad’s army are making for defeating the American military presence in eastern Syria.

Daraa is the object of their next move. For some weeks, DEBKA Weekly’s military and intelligence sources report the offensive for the capture of Daraa has been in preparation. The irony is that the Russians are lending a helping hand for the undoing of the first deconfliction zone to be established by Trump and Putin in 2015.

Israel was drawn into the US plan for pre-empting the Daraa operation, after losing an F-16. Russian-Syrian air defense missiles shot it down on Feb. 10 during an Israel Air Force reprisal raid for the intrusion of an Iranian drone. That raid targeted the Iranian drone’s mobile command vehicle at the Tiyias T-4 air base near Palmyra. But the next wave of Israel air strikes later that day was given a green light from Washington to bomb the very Iranian command centers that are immersed in preparations for the Daraa offensive.

This wide-ranging Israeli air offensive achieved several objects: It has meanwhile relieved Israel Golan of the approaching threat of Iranian-Syrian-Hizballah military proximity; and saved the Daraa district from occupation by a hostile force bent on using it as a jumping-off point for dismantling US military positions in eastern Syria.

“Meanwhile” is the key word, say our sources. A week after Israel flattened 12 targets in Syria, Russian, Iranian, Syrian and Hizballah strategists had gone back to their preparations for the Daraa operation. Another military confrontation is therefore on the cards, again involving Russia and the US, as well as Israel, Iran, Syria and Hizballah.