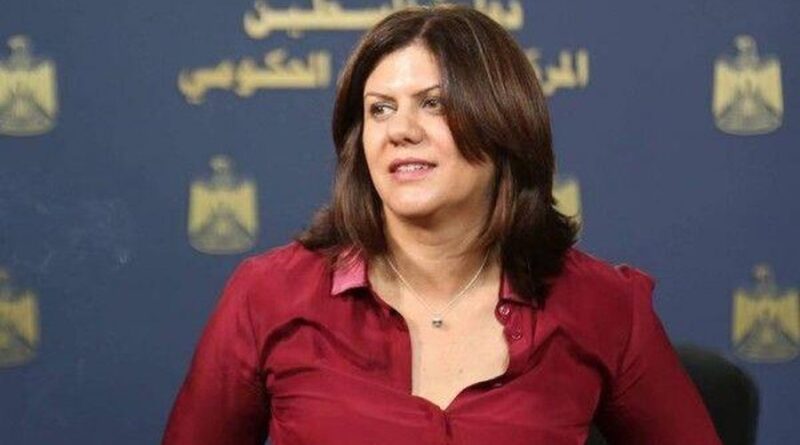 Minutes after the shooting death in Jenin of Al Jazeera correspondent Shirin Abu Aqleh, 51, on Wednesday, May 11, the Palestinians and the Israeli Arab Raam party rained down accusations on Israeli troops, along with her employer, the Qatari news network.  Aqleh, a Palestinian reporter, was covering the clashes in the Jenin refugee camp that erupted when armed Palestinians released heavy gunfire and explosive devices against the Israel troops, who were on a counter-terror raid in the flashpoint town following a string of deadly terrorist attacks in four Israel towns.

Abu Aqleh was not the first war correspondent to pay the price for the close-range coverage of armed conflicts – whether British reporters in the Middle East, American journos in Libya or French reporters in Mali. At least 5 correspondents died in the first month of the Ukraine war. However, the Al Jazeera case was instantly seized on for political fodder.

MK Ahmed Tibi, of the Joint Arab Front party, flaunted her US citizenship as cause for President Joe Biden to call off his visit to Israel next month. The US embassy called for an immediate and thorough investigation. And the Raam Arab party and its leader Abbas Mansour, while waiting for the Shura religious council to decide on its continued membership of the government led by Naftali Bennett, termed the dead journalist a shahid (martyr) and posted condolences to “her family, Al Jazeera and our Palestinian people.” Abbas demanded an international probe into the circumstances of the tragedy.

The objective value of any probe to establish whether the journalist’s death was down to Israeli troops or Palestinian gunmen is questionable in view of the speed with which the Red Crescent whisked her body out of sight.

IDF spokesman Ran Kochav commented: “I can’t say for sure whether Aqleh was killed by Palestinian fire, and prefer to exercise caution. We are examining the incident from the operational and professional aspects, just two or three hours after it happened, and checking the trajectory and ballistics. She was very close to where the armed Palestinians were situated.” The spokesman went on to say: “But if the death is down to us, we will apologize, and if a mistake was made, that too will be said.”

The spokesman noted that the removal of the body before it could be examined indicated that “They may have good reason for hiding the evidence.”

PM Naftali Bennett, while deploring the death of Abu Aqleh, accused Palestinian leaders of blaming Israel “without concrete evidence.” He pointed to video footage of Palestinian gunmen boasting they had killed an Israeli soldier and showing a fallen body. In fact, no soldiers were injured. The fallen body was therefore likely to be the late Shirin Abu Aqleh,” he said.

Israel offered to conduct a joint autopsy and investigation with the Palestinian Authority but the offer was refused. “We need to document findings and find out the truth,” Bennett urged..

The prime minister went on to state with emphasis: “We fully back our fighters who risk their lives in our defense. The IDF will continue to engage the terrorists in their bastions.”

The government coalition’s Arab partner, Ra’am, demanded the immediate formation of an international commission to investigate the journalist’s death. This faction had already last month frozen its participation in government, pending a decision by the Shura council, over the situation on Temple Mount.  The Ramadan festival was the occasion of mass Muslim violence emanating from the Al-Aqsa Mosque against the police guarding Temple Mount, a shrine that is sacred to three monotheistic faiths. Ra’am, an offshoot of the Muslim Brotherhood, is clearly maneuvering to manipulate and commandeer Israel’s war on Palestinian and jihadist terrorism as well as the conduct of security on Temple Mount. The journalist’s death strengthens its leverage as part of a government recently bereft of a majority and so dependent on every member of parliament to carry votes on key policies.