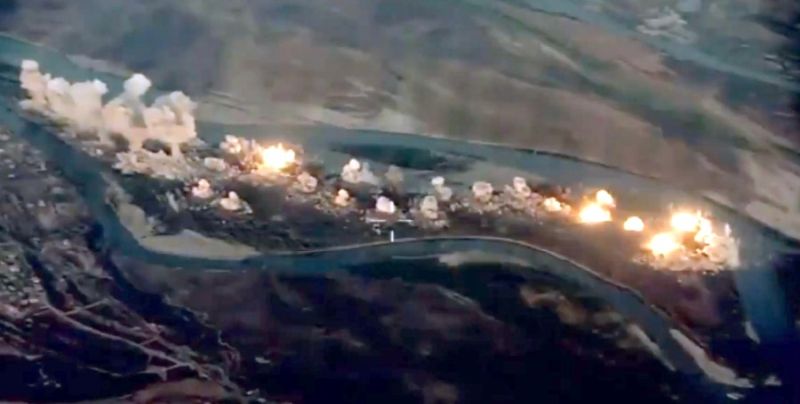 Al Qaeda’s jihadist offspring, the Islamic State, thrown out of its vast holdings in Iraq and Syria, is again on the offensive – this time to grab control of the waterways of Iraq and Syria. This comeback was revealed as America marked the 18th anniversary of Al Qaeda’s Sept. 11 terrorist outrages in New York, Washington DC and Pennsylvania.

On Tuesday, Sept. 10, US-led coalition forces and Iraq’s Counter-Terrorism Service conducted air strikes across Qanus Island on Iraq’s Tigris River, where ISIS is believed to be setting up a camp. US Col. Myles B. Caggins III, spokesperson for Operation Inherent Resolve, defined its mission as prevention of the revival of Daesh forces in Iraq and Syria. He displayed a video showing multiple fireballs from the munitions dropped by the twin-engine F-15 Eagles and all-weather F-35 jets taking part in the operation.

Coalition forces have deployed 80,000 pounds of munitions for disrupting ISIS fighters’ ability to establish hidden bases in the Qanus island’s dense vegetation. After the air strikes, the 2nd Iraqi Special Operations Forces Battalion cleared the ground. “We are setting the conditions for our partner forces to continue bringing stability to the region,” said Maj. Gen. Eric T. Hill, commander of the Special Operations Joint Task Force.

However, according to DEBKA Weekly’s counter terrorism sources, Iran Al Qods Brigades are working on a separate plan for battling the jihadists’ takeover of the two key rivers. Their plan hinges on providing loyal Iraqi Shiite militias with small, armed speedboats for operations to evict ISIS from the main assault bases the terrorists have set up on the Tigris and Euphrates, the historic rivers running through Iraq and Syria and their main cities. Whereas five years ago, ISIS and its leader, Abu Bakr Al-Baghdadi focused on devouring territory – and managed to overrun 60 percent of Iraq and nearly 50 percent of Syria – today, Islamic State is concentrating on their waterways. Tailormade for their purpose are bamboo and mangrove thickets growing densely in the swampy land of the riverbanks. From there, the Islamic terrorists can strike deep inside the cities of Syria and Baghdad and withdraw to their almost impenetrable hideouts safe from pursuit.

Iran’s war planners have concluded that unless a naval force is dedicate exclusively to the defense of the two rivers, ISIS will soon begin recovering large tracts of territory.

The Inspector General of the US Defense Department in August indicated in a report released in August that ISIS continues to pose a significant threat to the Middle East. “Despite losing its territorial ‘caliphates,’ the Islamic State in Iraq and Syria solidified its insurgent capabilities in Iraq and was resurging in Syria” from April through June.”

Military officials at the Defense Department complain that “the reduction of US forces has decreased the support available for Syrian partner forces at a time when those forces need more training and equipment to respond to the ISIS resurgence.” Since the local forces “remain unable to sustain long-term operations against ISIS militants,” they say, ISIS is also “likely reestablishing networks in both countries” and continues to function as an insurgency in both.