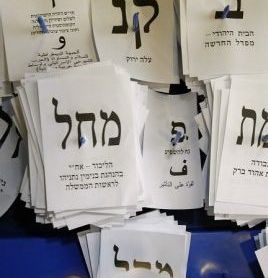 With Israel coming out of a four-week lockdown with its coronavirus infection rate as high as before – and a death toll of 5,001 – the 39 parties signing up for election by Thursday night, Feb. 4, will no doubt adopt as their battle cry charges of chaotic mismanagement of the pandemic crisis. Those charges were amply stoked by the clueless way the two rival segments of the coalition government handled the dilemma of whether and how to wind down the lockdown expiring Thursday night. They were confronted with a tide of popular defiance to any more closures that matched the alarming rate of infection.

This decision was blocked for 48 hours by wrangling between PM Binyamin Netanyahu, who supported the Health Ministry insistence on maintaining the lockdown for another weekend until Sunday midnight, and Defense Minister Benny Gantz, who demanded a phased exit from the restrictions to start without delay.

They finally agreed to end the closures on Sunday morning after going at it hammer and tongs until the last moment. Even then, the decisions were half-baked. They allowed public movement beyond a one-kilometer radius (in any case the streets and roads were humming), and the reopening of street shops, hairdressers and offices with no access to the public. But they left the vital decision on schools, restaurants and shopping malls for another turbulent cabinet session, and the airport was closed until further notice, the kiss of death for the tourist industry.

The economy is in tatters, hundreds of thousands of businesses and jobs are lost for good and the damage to children and parents long homebound may be irreparable. However, the UK variant of covid-19, which accounts for an estimated 70pc of infection, has proved to be an enemy as unpredictable as it is ubiquitous. It leaves health experts aghast and stuck for solutions, except to urge people to hurry up and get vaccinated. They admit, however, that the unequaled pace of vaccinations is still not keeping up with the fast-spreading peril.

Therefore, the health ministry is reluctant to recommend more than a very partial reopening of schools – kindergartens, and 1-4 and 11-12 grades in “green” and “yellow” infection districts, without a date. Even then, more than 60pc of all schoolchildren would be condemned to stay isolated at home. Most have given up the frustrating struggle with remote teaching.  At the same time, dozens of teachers refuse to take virus vaccinations and complain that pressure to do so violates their civil liberties.

Plenty of tools are therefore out there for beating down the government parties, whose resources for battling an implacable, invisible enemy are clearly threadbare.

Amid the pervasive atmosphere of despair, the political landscape for Israel’s fourth election in two years differs in critical ways from its three predecessors, not least by a more youthful lineup of new faces across the board. A handful of generals made for the exits having realized that politics was not their battlefield. The lone survivor, former chef staff Benny Gantz, also hangs by a thread.

While the left side of the map remains steadily marginalized – except for a small shot in the arm by new Labor leader Meirav Michaeli – the right side is enormously strengthened, although more divided than ever against Netanyahu and his Likud party by the inroads of defectors. According to the polls, if two key defectors – Gideon Saar’s New Hope and Naftali Bennett’s Yemina – were to hitch up with two other anti-Netanyahu devotees, the opposition Yair Lapid’s Yesh Atid and Lieberman’s Yisrael Beteinu, they could hypothetically drum up the numbers for a new coalition government.

While one never says never in politics, all these parties have little in common except for the anti-Bibi ticket and the utter conviction of all their leaders that each alone is right for the top spot in any future combination.

Interestingly, Saar’s New Hope has attracted far right elements of Likud, while Bennett has drawn leaders of the settlement movement. In this sense, they affirm their rightwing credentials, whereas the slate Likud presented on Thursday showed signs of leaning to the center, even though Netanyahu persuaded two far-right National Religious splinters at the last minute to merge to provide him with a useful couple of mandates for building a post-election government. The Joint Arab List,which won an impressive 15 seats in the last two elections, has split, with the Ra’am faction running independently after its leader Mansour Abbas held conversations with the prime minister.

A country desperate for good news learned on Thursday that a hopeful cure for covid-19 had scored 95pc success in its first Phase 1 trial on human beings at the Ichilov Medical Center in Tel Aviv. There is still a way to go before Prof. Nadir Arber’s innovative EXO-CD24 is established as the world’s first cure for the deadly virus. Developed to treat certain kinds of cancer, the substance is easily administered by inhaler and relatively cheap to produce. It worked like a charm on its first 30 seriously ill coronavirus volunteers, 29 of whom improved in a couple of days and were soon discharged from hospital.