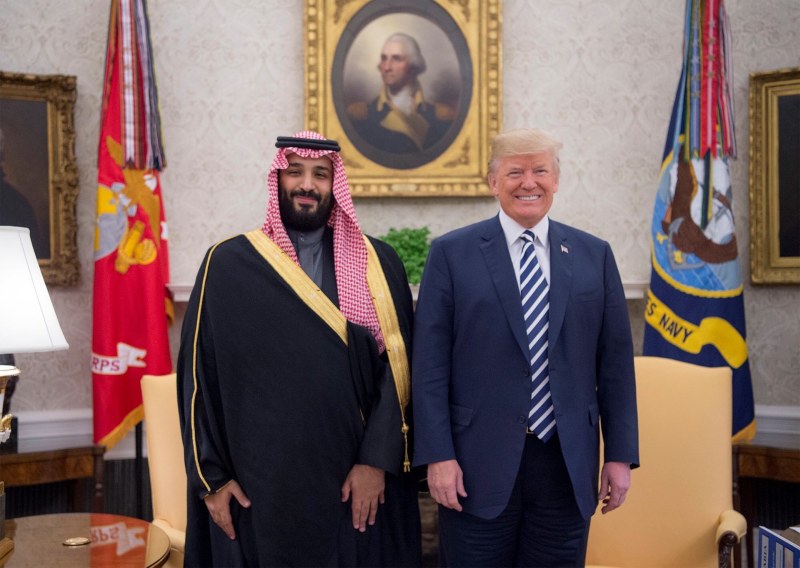 In the early days of Jamal Khashoggi’s disappearance on Oct. 2, the Trump administration wavered between threats of “severe punishment” and trying to deflect the heat of escalating Turkish allegations away from Saudi Arabia and its Crown Prince Muhammad bin Salman (MbS). President Donald Trump referred to a possible operation by “rogue elements” and a “botched interrogation” as the causes of the missing journalist’s putative death. But this week, when the Turkish accusers of Riyadh and his own domestic detractors began snapping at the heels of the president and his son-in-law Jared Kushner, over their friendship with the crown prince, a critical decision was reached in the White House: If MbS could not be positively exonerated, he might have to be abandoned, while every effort would be made to salvage the US alliance with the oil kingdom.

After being accused of defending the Saudis, Trump’s tone changed: On Monday, Oct. 16, he said: ”It would be bad” if Saudi Arabia’s king and crown prince knew about the suspected killing of Khashoggi in the Saudi consulate. Both the king and MbS insistently denied knowledge of the incident in phone calls with Trump.

According to DEBKA Weekly’s sources, Pompeo laid tough options before King Salman and his son, the crown prince, when he met them in Riyadh on Tuesday, Oct. 16, before traveling to Ankara. He pressed them hard to draw the necessary implications from the affair, however unpleasant, On arriving in Ankara, he was greeted with more Turkish “revelations” alleging the Saudi consul’s implication in the alleged murder and dismemberment of the journalist.

The Khashoggi crisis erupted too closely on the heels of the Kavanaugh assault on the Trump administration for it to be mere happenstance, say the president’s Washington adherents. Whereas the probe of Russian tampering in US elections involved a small group of the president’s former associates, the Khashoggi affair’s accusing finger pointing at the Saudi crown prince reaches inside America’s first family – Trump himself and his son-in-law. Jared Kushner is a leading White House policy facilitator in key areas: He was the quiet force for pulling off new trade deals with Mexico and Canada and the live wire in president’s projected Plan of the Century for resolving Israel’s dispute with the Palestinians and relations with the Arab world. Most of all, he is a close friend of Crown Prince Muhammad. Both are relatively young, in their 30s. Kushner has his finger in other pies which have never reached the public domain, such as the idea for an Arab NATO to block Iran’s military expansion.

Israel’s Prime Minister Binyamin Netanyahu, who is close to Trump, may also be hit by the arrows flying from Ankara against Saudi Arabia. His government’s Middle East strategy and Arab relationships have for years been anchored in understandings with the Saudi throne and his good rapport with MbS.

The scale of the US-Saudi crisis can be measured by the contrast between the sight of Trump taking part in the Sword Dance with King Salman in Riyadh on May 21, 2017, during his first foreign visit as president, and the White House’s dismay today as the relationship teeters on the edge.

While the ramifications of the affair unfold, its origins remain obscure.

In 2017, Jamal Khashoggi exiled himself from Saudi Arabia to the United States, avowedly in fear of the kingdom’s long royal and intelligence arms, despite his high-level connections, security ties and distinguished family, many of whom are international arms traders and senior Saudi spooks. We may never know what brought him to the lion’s den of the Saudi consulate in Istanbul on Oct. 2, claiming paperwork for his impending marriage. Did unknown agents order him to go there or lure him into a trap?

The answer to this question is the key to discovering who runs the well-oiled machine that went into action instantaneously and, for two weeks, pumped out suggestive leaks to Turkish and US media depicting Saudi assassination squads killing and torturing the missing journalist, before allegedly dismembering his body and spiriting the parts out of the country by vehicles and aircraft with diplomatic plates. The joint Saudi-Turkish forensic team, which inspected the consular building on Monday night Oct. 15, was said to have encountered a strong chemical smell of a toxic substance, suggesting that a thorough clean-up of any evidence had been conducted.

The author of these leaks persistently fingers the crown prince, and has so discouraged a wider look at the half a dozen royal and intelligence factions capable of running an operation of this kind. This innuendo may rest on factual intelligence data or, alternatively, be part of a plot to make sure that the crown prince is disqualified from ascending the throne as King Salman’s successor. As king, MbS would be a huge asset to the Trump presidency and a boost for Kushner’s esteem.

Trump sent Secretary of State Mike Pompeo to Riyadh to sort out the mess – not just as the top US diplomat, but by virtue of his recent experience as former CIA Director and certain knowledge of the royal house’s inner workings. He will have found senior princes in hot discussion on how to proceed, with Prince Muhammad’s enemies shouting louder than ever for the king to let him go. One of crown prince’s potential rivals may be his younger brother, Khalid bin Salman, who greeted Pompeo at the airport. Khalid served as Saudi ambassador to Washington until he was recalled home to Riyadh last week and is not expected to return to his post.

This week, President Trump told a 60 Minutes TV interviewer that although “Washington DC is a vicious, vicious place,” he feels “very comfortable” in the White House. He is unlikely to feel entirely comfortable or safe until the Khashoggi affair is resolved.