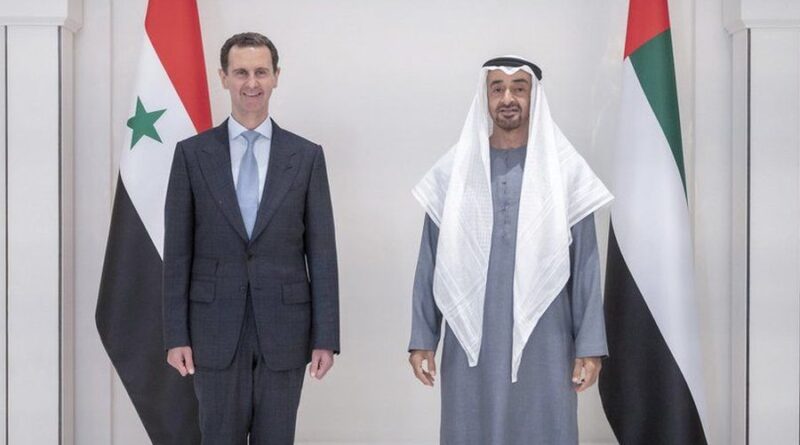 Syrian dictator Bashar Assad was received in the UAE on Friday, March 19 for his first visit to an Arab capital in 12 years, amid uproar in Abu Dhabi and Riyadh over the reported US plan to de-list the IRGC as a terrorist organization. Assad was received in Abu Dhabi after long being blacklisted over his atrocities in subduing the civil uprising against his rule, as gesture of protest by the Arab Emirates over Washington’s possible removal of Iran’s Revolutionary Guards Corps (IRGC) from its list of terrorist groups, to win Tehran’s consent to reviving the 2015 nuclear deal. Abi Dhabi and Riyadh shares Jerusalem’s dismay over this step.

Prime Minister Naftali Bennett and Foreign Minister Yair Lapid recalled in a statement that the Revolutionary Guards “has murdered thousands of people, including Americans” and called its removal from the list of terrorists “an insult to their victims.” The two ministers said: “The fight against terror is a global mission” and “We believe that the United States will not abandon its closest allies in exchange for a promise not to harm Americans.”

For the rulers of the UAE and Saudi Arabia, the Biden administration’s eagerness to pander to Iran for the sake of a nuclear deal is more dangerous than an “insult” to the Guards’ victims. US rapprochement with Tehran is seen as the repudiation of America’s mutual security understandings with the two oil-rich Gulf nations. Both made a point of ducking President Joe Biden’s attempt to bring them aboard his plan to counter the impact of US sanctions against Russia for invading Ukraine on energy prices.

Giving the hated Assad a platform in Abu Dhabi to declare cynically that his visit “would be the beginning of peace and stability for Syria and the entire region” was intended as a serious poke in the eye for the Biden administration.

The mild criticism of the potential step by two of Israel’s leaders – defense minister Benny Gantz insisted that any difficulties with Washington be addressed solely behind to closed doors – barely covered the severe peril in store: After being freed from the shackles of a terrorist organization, the IRGC can legitimately unleash its missiles against Israel for every attack on Iran’s military presence in Israel – in pursuit of Tehran’s vow to destroy the “Zionist” state. After all, that presence came at the invitation of Damascus and may therefore be deemed legitimate.

Furthermore, the lifting of restraints on the IRGC will free up billions of frozen dollars as well as permitting the organization, which controls one-third of Iran’s economy, to buy advanced weaponry in the West.

The rest of the region needs no reminders of the powerful IRGC’s Shiite “export” mission, to which it was dedicated by the revolution’s founder Ruhollah Khomeini. The Guards are in charge of Iran’s strategic missiles and rocket forces. The IRGC has an estimated ground force of 150,000, and Aerospace Force that controls its missiles number some 15,000 personnel and a Navy of at least 20,000, including 5,000 marines.

The father of Iran’s nuclear program, the late Mohsen Fakhirizadeh, allegedly assassinated by Israel’s Mossad two years ago, was a senior officer of the Revolutionary Guards. Its elite Quds Force is responsible for “unconventional warfare roles” and establishing and training militias as proxy fighting and terrorist machines in targeted nations, e.g., Hizballah in Lebanon, Houthis in Yemen, large pro-Iranian conglomerates in Iraq.