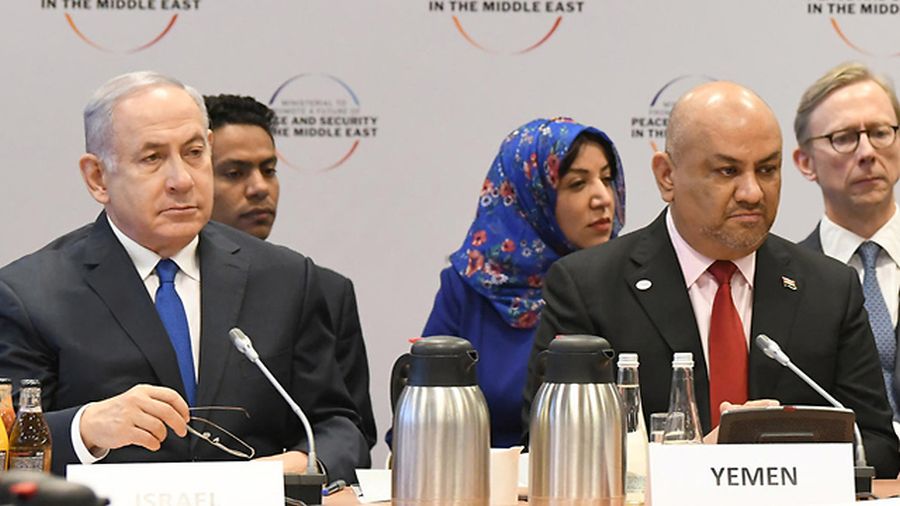 Prime Minister Binyamin Netanyahu, while seated next to Yemen’s Foreign Minister Khaled al-Yamani on Feb. 14, hailed the Warsaw conference as “historic” – if only for the unprecedented seating arrangements. The US, which co-hosted the Conference for Middle East Peace and Security as a major vehicle for the Trump administration’s campaign against Iran, most likely engineered those arrangements.  The event targeted the opponents of the anti-Iran campaign, at home and in Europe. It was also intended to boost Saudi Arabia, whose armed forces have been battling Iran-backed Yemeni Houthi insurgents for four years, and the United Arab Emirate, whose army is fighting alongside the Saudis in Yemen.

For Israel, the event served as a huge campaign boon for Prime Minister Netanyahu whose Likud is campaigning for re-election on April 9. He was shown easily hobnobbing with world leaders on an international stage, notably in amicable first-time encounters with Arab rulers. His seating alongside the Yemeni foreign minister flashed around the media, the day after he met with Omani Foreign Minister Yusuf bin Alawi bin Abdullah.
That juxtaposition also carries a price. Secretary of State Pompeo used it as a symbol of the US administration’s expectations of Israel for a larger military role alongside the US, Saudi Arabia and the UAE in the Yemeni war. The Houthi insurgents are supported not only by Iran but also by Hizballah, Israel’s arch-enemies. Until now Israeli assistance to the Yemeni government went through Saudi Arabia.

In his speech to the Warsaw gathering, Pompeo stressed that the Middle East would not achieve peace and stability without confronting Iran. “It’s just not possible,” he said. They are operating in Lebanon, Syria and Iraq; they support the Houthis in Yemen, as well as Hamas and Hizballah, all of whom pose real threats. The Iranians must be pushed out of those places,” said Pompeo. For the IDF and its intelligence army, the penny has dropped. Netanyahu returns from Warsaw with new Israeli war fronts outside its borders, following on his praise of Arab foreign ministers for speaking with “exceptional power, clarity and unity against the shared threat posed by the Iranian regime.”
In Washington, President Donald Trump faced a hostile front to the campaign he is leading internationally against Iran when the House Democratic majority passed a resolution on Thursday for ending US military support for the Saudi-led coalition fighting in Yemen. The measure passed 248 to 177, and was supported by 230 Democrats and 18 Republicans.

39 thoughts on “At Warsaw parley, Israel’s anti-Iran front is stretched to Yemen, Iraq”