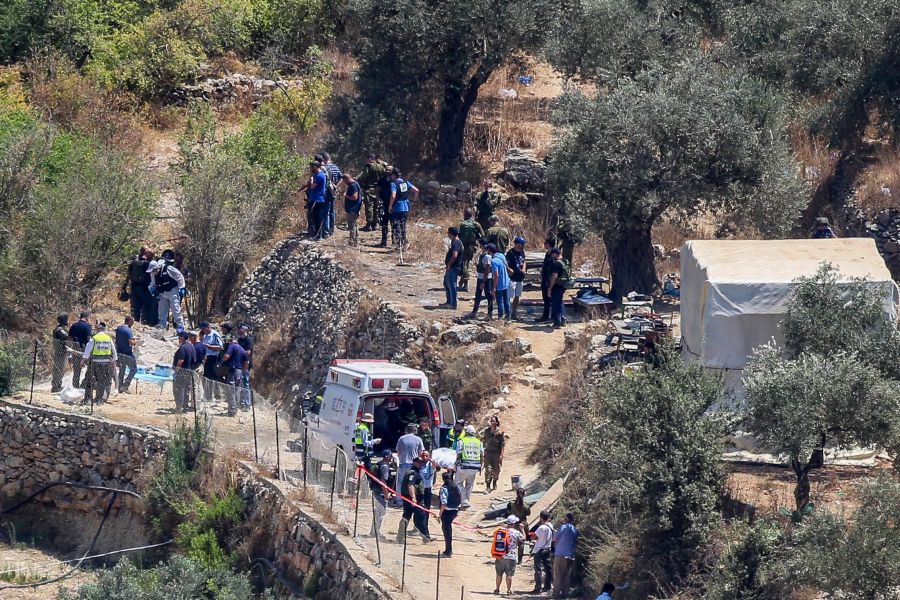 It was an improvised explosive device set off remotely by Palestinian terrorists which caused the death of 17-year old Rina Shnerb and injured her father, Rabbi Eytan, 46 and brother, Dvir, 19. It blew up on the path they were taking on Friday morning, Aug. 23, down to the popular Danny Spring nature reserve outside Dolev in Binyamin. The first stages of the investigation into the attack reveal that a squad of two or three terrorists took the time to plant the bomb expertly on the path in the early hours of the morning. They then withdrew to the terraced olive-grove slopes overlooking the spring and watched for trippers to arrive. When the three Shnerbs started along the path, they detonated the bomb and made for their escape car. This squad is still at large.

Rina out front took the main force of the blast and shrapnel. Rabbi Eytan, although hurt, called for help and tried first aid to save his daughter and then to staunch the bleeding from his son’s serious injuries. Paramedics who were soon on the scene toiled to save Rina but were forced to confirm her death. Her father and brother were flown by helicopter to hospital in Jerusalem. Rina’s funeral at their hometown of Lod was attended by her mother, nine other siblings and hundreds of mourners.

Remote-controlled IEDs (notoriously used against US troops in Iraq and Afghanistan) were the weapon of choice for the Palestinian Fatah-Tanzim squads against the Jews of Judea and Samaria in the years 2001-2004, after which their intifada was suppressed. In recent years, Palestinian terrorists turned mostly to shooting, stabbing or car-ramming tactics. The return of roadside bombs represents a dangerous escalation and poses a major danger to the traffic using the roads and highways of this region.

65 thoughts on “Back to the 2nd Intifada and Palestinian remote-control bombs. No leads to killer-terrorists”