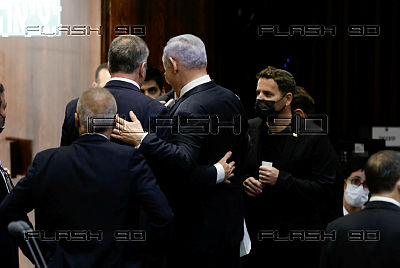 The Bennett-Lapid government was approved on Sunday, June 13, by a vote of 60 to 59 with 2 absentees. Binyamin Netanyahu and his ministers vacated their seats at the government table in favor of Prime Minister Naftali Bennett, Yair Lapid and their cabinet, and moved to the seats assigned to the opposition. Netanyahu in passing shook hands coolly with his successor. The 25 new ministers from 8 parties were then sworn as members of the incoming alternate government. The Knesset also voted to replace the Likud Speaker Yariv Levin with Micky Levi of Yesh Atid.
These ceremonies were preceded by two keynote speeches and a stormy Knesset session.

Prime minister-designate Naftali Bennett, after lauding Binyamin Netanyahu’s impressive 12-year contribution to the nation, devoted his Knesset speech on Sunday, June 13, to “the passing of the torch to the next generation.” He persisted in the presentation of Israel’s 36th government and its agenda in the face of frequent, orchestrated heckling, retorting only that the strident clamor rising from the chamber represented a government that had lost control and lost its ability to rule.

Bennett then declared that, as the next prime minister, he was committed to “never allowing Iran to acquire a nuclear weapon and to Israel’s autonomy of action for preventing this.” The Palestinians, he said, “refuse to recognize our existence in this country” and, “if the Hamas violates the Gaza ceasefire, it will run up against an “iron wall.” No one in the world will stop us doing whatever is necessary. The country was sorely divided but this government, he pledged, “would represent every Israeli – from Rahat [the Bedouin town in the Negev] to Kirya Shmona [on the northern border]. “

Any expectation that the new opposition leader would congratulate his successor was quickly dashed. Binyamin Netanyahu rose to speak breathing fury and contempt. “We have worked night and day for this country and two million citizens prefer me as prime minister,” he said, “We go into opposition with our heads held high and will not rest until we get rid of this dangerous government.” He dismissed Naftali Bennett’s promises as “fine talk” without substance. This is not a man who upholds his word. “Neither is he and his ministers capable of standing up the US and world nations – nor are they even willing to do so,” he said. “They are not fit to represent this country for a single day.” He added: “They must be celebrating in Tehran.”

Netanyahu concluded by addressing the new ministers: “Set your minds at rest. We will fight you day by day and we’ll be back much sooner than you think.”