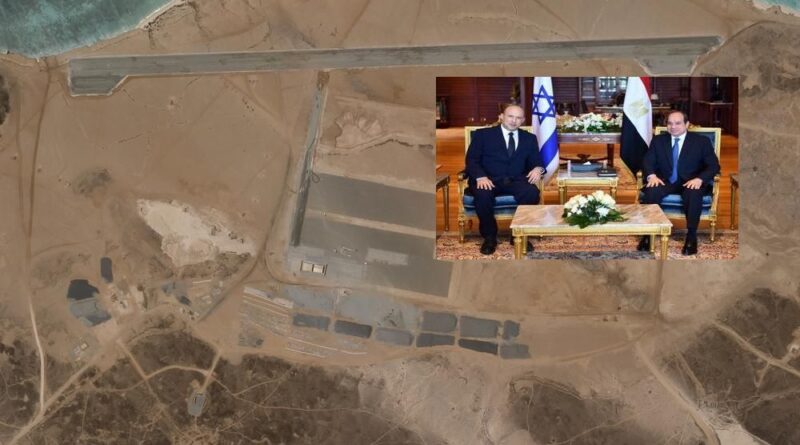 Prime Minister Naftali Bennett had hoped to come out of his first meeting with Egyptian President Abdel-Fatteh el-Sissi at Sharm el-Sheikh on Monday, Sept 13.9, with three gains. The atmosphere was friendly and the two leaders were photographed smiling and flanked prominently by their national flags.

But that was as far as it went, DEBKAfile’s sources reveal. Despite the Sissi regime’s influence over the Palestinian Hamas terrorist group ruling Gaza, the president not only declined to exercise restraint over its unbridled outbreaks of violence, he also withheld any commitment to control the Gaza Strip’s Rafah gateway through Sinai. This means that the flow of arms into the enclave may continue undisturbed – whether they are Iranian or purchased by Hamas at Libya’s weapons bazaars.

Bennett also expected Sissi to request approval for another troop buildup in Sinai, over and above the quotas allowed under their bilateral peace accord. A boost was approved by the former Israeli government two years ago at the peak of Egypt’s battle against ISIS dominance of the peninsula. But now, the Egyptian president refrained from asking the prime minister for permission. And so Egyptian troops are now moving freely in and out of Sinai without a by-your-leave from Jerusalem.

Bennett also had high hopes, say DEBKAfile’s sources, that Sissi would welcome Israel as a member of the “Forum of Red Sea Nations” established in 2020 by Egypt and Saudi Arabia and joined by Sudan, Djibouti, Eritrea, Yemen and Jordan. A day before their Sharm El-Sheikh summit – and not be chance – Israel was revealed by the Tehran Times, as maintaining three military footholds in the Red Sea/ Arabian Ocean region according to Iran’s ambassador to Yemen Ibrahim Mohamed Al-Dallami.

Israeli troops were reported to be based on Socotra Island in the Arabian Ocean operating in conjunction with American and United Arab Emirates Red Sea contingents.

Israel is also said to maintain air force units on Yemen’s Mayun Island, a small volcanic, unpopulated isle that overlooks the Bab El Mandeb Strait at the southern end of the Rea. Due to its strategic value, Abu Dhabi air units were deployed there last year.

Hanish Island. located midway between the Saudi and Eritrean shores, also has an Israeli military presence.

Israel is thus an integral element of the international array guarding these vital Red Sea and Arabian Ocean maritime routes against Iranian aggression. All the same, although the Egyptian president listened closely to the prime minister’s pitch, he made no response as to membership of the Red Sea Forum.