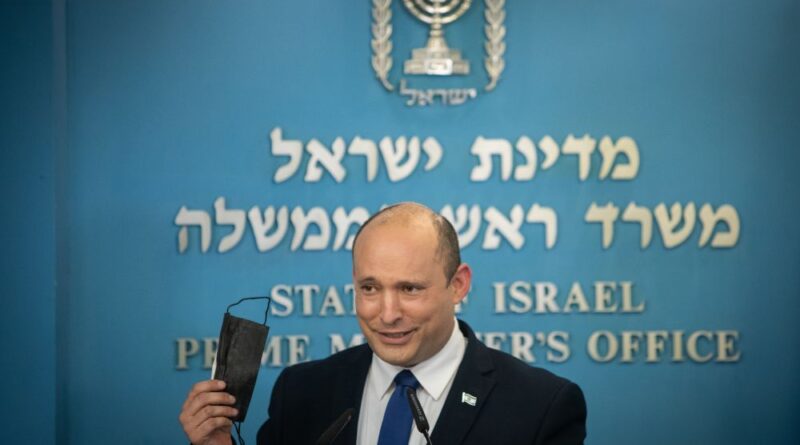 Prime Minister Naftali Bennett may soon find that half-measures won’t pin down the endlessly nimble and changeable Covid-19 virus. On July 14, he took the risk of predicting victory over the virus in five weeks, provided that the public acts responsibly and joins forces with the government. This risky prediction could only have come from a leader, just a month as head of a new government, with no experience in battling this wily, unpredictable enemy. The delta variant has also been around for a a month, but it is obviously spreading fast in defiance of the new government’s lax policy of “containment.”

On Friday, 855 new cases were confirmed in Israel – one tenth brought in by returning travelers who land at Ben Gurion airport day by day. The new virus is sourced to the UK, Turkey, Cyprus, Georgia and the US. By next week, the first four destinations will have to be added to the government’s list of “red countries” under travel ban. Trippers returning home from there will face full quarantine, even those who were vaccinated or recovered from a past bout of the virus. In the case of the US, the Bennett government will adhere to its predecessor’s guideline of excluding Israel’s great friend from the ban.

Furthermore, covid fatalities rose in the past week to 10 after dropping to zero when this government took office. The grim scenario of a covid variant capable of overriding the vaccine is nearing reality with the rising number of vaccinated and previously infected cases to be struck down by the Indian variant. While those shots appear to protect against severe symptoms, another factor has to be considered: Some early research is finding that among the people who were inoculated six months ago, the level of antibodies has decreased, fastest for elderly people and the immune compromised. While still effective against serious illness, we are seeing more and more fully vaccinated patients suffering repeat bouts.

The ease with which it is possible to get on a plane and travel (40,000 departures this Friday) places a large question mark over the seriousness of the government’s intention to grapple with the encroaching covid variants, although Israeli travelers confirmed positive abroad find themselves hospitalized and quarantined for longer periods than they would at home (21 days in Italy).

The Bennett government is opting to dodge strict preventive measures that might upset normal life. To meet the current lackadaisical popular mood, it is resorting to optimistic rhetoric and gimmicks. The Green Certificate for admission to public places is, for instance, to be renamed “The Happy Certificate.” Health Minister Nitzan Horowitz is saying that everyone must learn to live with the coronavirus.

The new ministers have inexplicably chosen England as their model, even though the number of seriously ill patients there has doubled. After 120,000 deaths, health authorities are slamming as irresponsible Prime Minister Boris Johson’s decision to drop mandatory masks and social distancing on July 19. By August, they predict, British hospitals will face severe strain and 200 deaths a day will result.

Even so, the Bennett government has adopted a policy of easing restrictions to avoid disturbing normal activity in the country, including popular foreign travel, although no one has any notion of what the next covid variant has next in store. This is a dangerous gamble. If Israel continues to remain open to new virus strains from the US, fails to enforce quarantine, and treats covid as a negotiating partner for compromise measures, the “Happy Certificate” may bring the country into lockdown in time for the next school year n Sept. 1 and the High Festivals will be far from happy.

On Friday, opposition leader Binyamin Netanyahu issued a grave warning: “The government must grapple with the coronavirus spread before it is too late,” he said. “It is of paramount importance at this point, as I warned a month ago, to get hold of millions of vaccines without delay. I set this up before I left government,” Netanyahu noted. The new supply will enable us to conduct a third jab in time.” He added. Assuming that the FDA will soon allow Pfizer to go forward with third shot, Netanyahu stressed: “We can’t afford to wait for another month until the vaccinations arrive because delta is meanwhile on the rampage and [delays] will result in needless deaths and much serious illness.”
This article was written by Sharon Mikhailov, Hebrew University MSc in medical sciences and director of clinical trials.