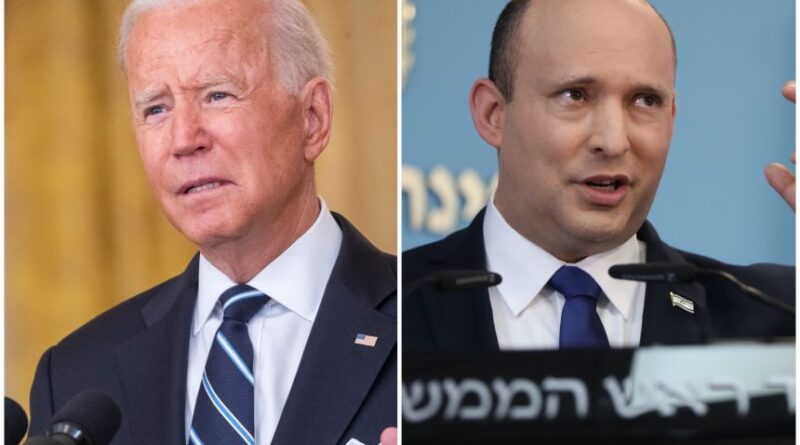 Both President Joe Biden and Prime Minister Naftali Bennett are counting on alleviating the troubles severely embarrassing them in the five critical days up to their White House encounter on Thursday, Aug. 26. President Joe Biden hopes the US military will drag the faltering Afghanistan withdrawal crisis out of the mud. Prime Minister Naftali Bennett gambles on the massive covid booster campaign curbing the spiraling coronavirus delta figures.

In any case, common ground between the two leaders is a priori a scarce commodity They agree only on the need to keep Binyamin Netanyahu from returning to the premiership.  Otherwise, they are at odds on most crucial issues, such as direct action for aborting a nuclear-armed Iran – or military escalation as a rule; how to, resolve the Palestinian issue, the status of Jerusalem and Jewish West Bank settlement expansion.

How far will the hawkish, right-wing prime minister line up behind the practice initiated by Foreign Minister and alternate PM Yair Lapid and Defense Minister Benny Gantz of “lining up with the Biden administration” on all security issues? The two are on the phone to Washington before embarking on any security operation. Israel has accordingly been prevented from punishing Iran for last month’s drone attack on the Mercer Street merchant ship or settling accounts for Hizballah’s s 19-rocket barrage in the first week of August.
According to DEBKAfile’s political sources, President Biden expects Bennett to go along with the Lapid-Gantz line. But up to what point?  Bennett is a former chairman of the Yesha (West Bank Settlements) Council. He has never referred to the two-state solution of the Palestinian issue espoused by Biden. Furthermore, Bennett has objected to the reopening of the US consulate in Jerusalem for the Palestinians and urged its relocation to Ramallah. The consulate was shut down when President Donald Trump moved the US embassy to the Israeli capital.

IN July, Biden agreed to delay reopening the consulate and also hold off demands on the Palestinian issue until the new Israeli government finds its feet. But he will not accept a long freeze. At the same time, the cabinet represents Israel’s political spectrum from end to end may be destabilized if forced to confront those issues for a consensus. Bennett is meanwhile hoping that his covid strategy of massive booster shots and preventing a third lockdown will give him enough popular leverage to solidify a leadership role.
On Saturday, Aug. 21, the US military were still struggling with their evacuation mission, which gained urgency as Taliban broke its own “amnesty for all” pledge six days after taking power in Kabul. Biden admitted that he could not predict the outcome of one of the “most difficult airlifts in history.” The flow of people desperate to flee packed the capital and its airport. A Norwegian intelligence report found Taliban searching for opponents and their families house to house and screening people on their way to the airport. Amnesty International learned of a Taliban massacre of 9 ethnic Hazara men after its seizure of Ghazni province.

The administration’s embarrassment over the fiasco registered clearly in the joint briefing Defense Secretary Lloyd Austin and Chairman of the Chiefs of Staff Gen. Mark Millay gave reporters this week. Both pledged solemnly to fulfull their mission to evacuate Americans and their local helpers from Afghanstan. However, the defense secretary mentioned Afghans refugees with “credentials” – a reference to the State Department’s difficulties in providing American visas virtually overnight for Afghans who served NATO in the course of Taliban’s unforeseen 11-day takeover of the country and its capital.

The Biden administration’s handling of this issue has shocked US Gulf allies and prompted hard questions from Israel’s security policymakers. After abandoning allies to the Taliban’s tender mercies in Afghanistan, what’s to stop the US, they ask, from abandoning us to Iran?

Bennett will be the first foreign leader to call on President Biden since the Afghan collapse. Some of his advisers urge him to offer Israel’s sympathy and full support in return for concessions on Iran. It will be the 49-year-old Israeli prime minister’s first chance to show his leadership qualities on a pivotal world platform. He badly needs to counter-balance his much-criticized dilatory performance in battling the covid pandemic. He also needs the limelight after letting Lapid and Gantz make the running on major policy-making.