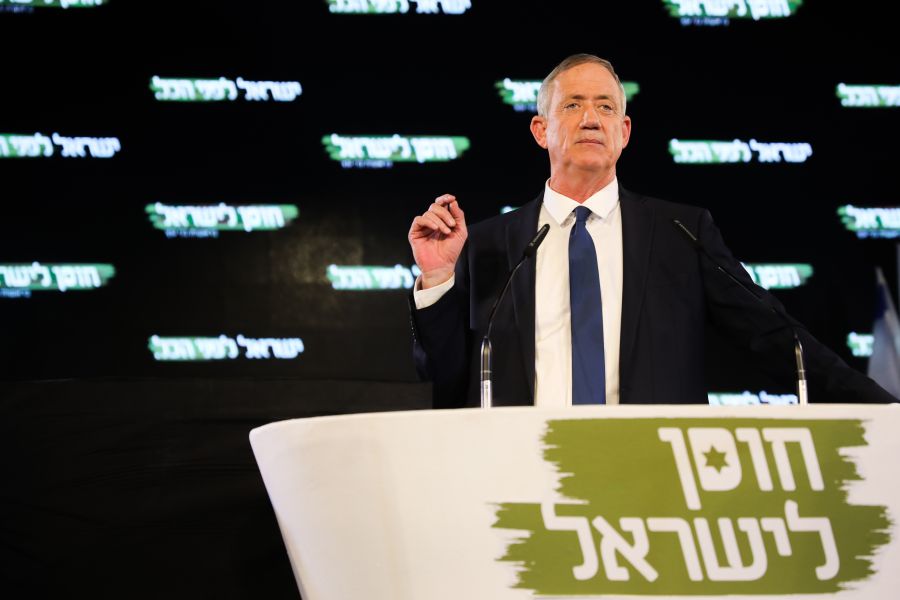 Benny Gantz, a likable, well-meaning, clean-cut figure, launched his bid to win the April 9 election in his first appearance on a political platform on Tuesday night, Jan. 29. But, as the speech unfolded, cheered repeatedly by an enthusiastic audience, a litany of well-worn truisms and slogans came rolling out. He may also have overreached himself when he repeatedly spoke in the character of the next head of government. Israeli political ground is littered with the bodies of numberless would-be prime ministers.
He also erred when he accused the Netanyahus’ (without naming them) as behaving like the old French monarchs, a simile that will hardly resonate with the average Israeli voter.
“Israel is a great country, but it is plagued by an ill wind of divisiveness, bitterness and despair,” he declared, then pledged to “embark on a big program of change.” His government, he said, would be “national, powerful, responsible, assertive and resolute.”  Security comes from deeds not words, said Gantz. “In the rough Middle East neighborhood, victory goes to the strong.”

The new politician made the routine promises to expand the settlement blocs and retain the Jordan Valley. Israel will stay on the Golan forever. Jerusalem is the eternal capital of the Jewish people. But he did not refer to his plans for Judea and Samaria, a serious omission of a topic of major interest to the Israeli voter.

Turning to Tehran, he promised that no threat to Israel’s sovereignty would be tolerated. He then challenged Iran’s Gen. Qassem Soleimani, Hizballah’s Hassan Nasrallah and Hamas’ Yahye Sinwar, and vowed to bring their rampages to a halt. His intention to revive extra-judicial assassinations of terrorist leaders was implied when he said that the liquidation of Ahmed Jabari in the Gaza Strip, which he ordered as chief of staff, would not be the last.

At the end of his speech, he presented Moshe Ya’alon who had announced that he and his new party would join Gantz’s Israel Resilience List and run together in the April election. The announcement, after long negotiation, brings together two former IDF chiefs of staff. Ya’alon served, moreover, as defense minister when Gantz led the IDF in the Defensive Shield counter-terror operation in the Gaza Strip.

Ya’alon gained at least two reserve spots for his candidates in the first 10 of the joint list. Its makeup has not been finalized. So far, only two have been named: Yoaz Hendel, a journalist, and Zvi Hauser, a former Likud cabinet secretary. Gantz and Ya’alon are shopping for additional parties, hoping they will jump aboard and help create a big opposition bloc dedicated to unseating the ruling Likud. Their ambition, however, is not supported by their initial appearance. They are indeed much-needed new faces on Israel’s political scene but have so far failed to deliver a strong new message or establish themselves as charismatic leaders and vote-catchers.