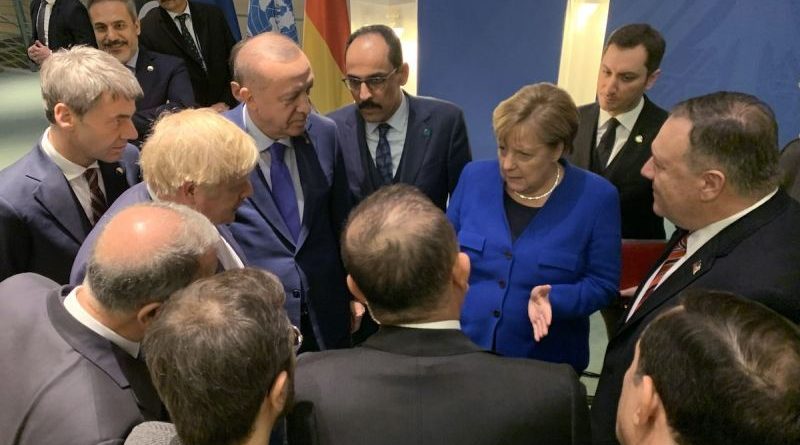 The Berlin summit for resolving the Libyan conflict was initiated by Chancellor Angela Merkel. It was prompted by the dread that the rival Turkish and Russian military interventions would push the conflict into a repetition of the disastrous Syrian war in Europe’s back yard.

US Secretary of State Mike Pompeo commented on Saturday, Jan. 18, “Libya’s conflict is increasingly becoming like Syria.” And German Foreign Minister Heiko Maas said, “Europe and those players who are influential in the region” have been called to Berlin because “we have to make sure Libya doesn’t become a second Syria.”

This high-profile gathering ought to have got something done. After all, it brought together the German chancellor, Russian President Vladimir Putin, Turkish President Recep Erdogan, British PM Boris Johnson, Italian PM Giuseppe Conte, as well Secretary Pompeo and delegations from the UAE, Egypt, Algeria, China and the Republic of Congo.

However, they produced no tangible results. Nothing was done to avert the major clash looming as Turkish “military advisers” conduct the defense of the internationally recognized government headed by Fayez al-Sarraj and the Russian “mercenaries” help Gen. Khalifa Haftar’s army, which has been fighting for months to capture Tripoli with additional backing from Egypt and the UAR.

DEBKA Weekly reports that, in the corridors outside the hall, the delegations did try to bandy informal proposals for lowering the military tensions.

One suggestion was for Putin to withdraw his Wagner group’s “volunteers” from Haftar’s army, or at least pull them back from the battle for Tripoli, in return for a corresponding commitment by Erdogan to remove his “military advisers.”

The Turkish president was also asked to put a stop to the stream of Syrian “volunteers” arriving on the Libyan battlefield in recent weeks from Syria itself and the refugee camps of Turkey. They are ready to fight for Prime Minister Sarraj for $200 a month from the Ankara purse.

Other proposals would have the UAE withdraw the fighter planes placed at Gen. Haftar’s disposal and so narrow his prospects of victory; and have Egypt return to their homes bases the T-72 tanks he recently sent over to the general.

None of those proposals reached the conference hall. The only decision approved by the full gathering was a general commitment by the participants to uphold the UN embargo on arms to Libya. But since they could not agree on the makeup of a monitoring mechanism, the flow of arms to the warring sides in Libya will no doubt continue as before.

For a serious breakthrough in the Libyan impasse, the Berlin summit would have needed to address three prickly issues:

1. Moscow’s drive to use its intervention to gain control of Libya’s oil fields, one of Europe’s energy sources. Putin would thus attain an equalizer for the American takeover of Syria’s oil fields.

2. Erdogan’s plan to trade his military aid to the Tripoli government for a grab at Libya’s gas rigs. His intervention there is really all about expanding Ankara’s presence in the eastern Mediterranean and commandeering the region’s natural gas deposits.

3. The danger of a potential Algerian military thrust into the Libyan mess. The new president, Abdelmadjid Tebboune, has his hands full with asserting his authority at home. However, his government won’t stand by for long and watch Egypt, the UAE or Turkey gain a foothold in Libya, with which Algeria has a 1,000km long border, and seize its energy deposits.

On Thursday, Jan. 23, a week after the Berlin summit on Libya, foreign ministers from countries bordering Libya gathered in Algiers for another attempt to shore up the shaky ceasefire. The invited ministers came from Egypt, Tunisia, Sudan, Chad, Mali and Niger, as well as Germany, which represented the European stake in the conflict.

Turkey and Russia, which respectively back the main combatants in Libya, the UN-recognized government in Tripoli and its challenger Gen. Haftar, were conspicuous non-invitees.