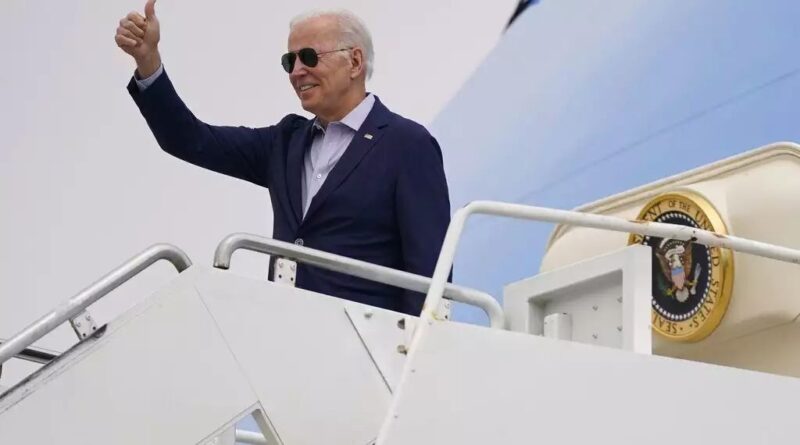 Crowds of smiling well-wishers would normally jostle to greet US President Joe Biden when he lands in Israel on Wednesday, July 13 – except that the three days of scheduled events were pared down to avoid over-taxing the 79-year-old leader in the sweltering midsummer heat. Some of the changes were made at the White House’s last-minute request. Whereas American presidents normally shake hands on the airport tarmac with a long line of welcoming dignitaries, Biden will wave hello from afar after Air Force One touches down at Ben Gurion at 15:45 local time.

The BIden party will not then proceed as originally planned to Palmachim Air Base for a display presented by Defense Minister Benny Gantz of some of Israel’s latest hardware – as well as honoring the president’s effort to obtain $30m of funding to replenish the Iron Dome rockets emptied by the last Gaza war. The star attraction will be the innovative Iron Beam, a laser anti-missile weapon under development. The display has been pruned down and moved to the skies of Ben Gurion airport.

Biden had also planned to attend the opening of the Maccabiah, known as the Jewish Olympics and greet American-Jewish sportsmen and -women taking part. This too was cancelled. At home in DC meanwhile, media pundits and politicians filled columns with “concern that age was starting to catch up” with Joe Biden and wondering whether he was fit enough to run for a second term. They waxed eloquent about his gaffes and stumbles during public appearances. An unnamed White House official commented that “a long trip would be crazy for a man of his age.”

His planned visit to Saudi Arabia was implicitly called into question, not least when it is bound to be contentious. This would be in contrast to his Israeli trip, where the present, potential and past prime ministers he met – incumbent caretaker Yair Lapid, former, current alternate PM Naftali Bennet, opposition leader former PM Binyamin Netanyahu and Benny Gantz, after fresh a merger between his Blue-White and Gideon Saar’s much smaller Hope Party infused Gantz with the hope of beating his two rivals in the November election and forming his own government. Bennett has opted out of another run.

All four would have been equally effusive about US friendship.

Biden will also be meeting Palestinian leader Mahmoud Abbas in Ramallah and visiting the East Jerusalem Augusta Victoria hospital during the visit. But while listening to Palestinian grievances and possibly repeating his belief in a two-state solution, he is unlikely to push this dispute strongly enough to antagonize his Israeli hosts.

No indication of the reception awaiting President Biden, as the first president to fly directly from Israel to Saudi Arabia, has come from its ruler Crown Prince Muhammed Bin Salman (MBS). According to most sources, the president will strive to negotiate a US-led regional air defense cooperation pact for signing among a group of Arab states and Israel to counter Iran.  Not all the potential signers are yet in the bag.

Biden may be satisfied with Saudi concessions to Israel short of formal normalization, such as expanding Saudi airspace to overflights to and from Israel, in return for Jerusalem consenting to a deal for transferring two Red Sea islands from Egypt to the oil kingdom.

Oil is said to be at the top of Biden’s agenda with MBS, higher even than regional stability, in view of the energy crisis generated by the Ukraine War. To make any headway with MBS, the Democratic president may have to walk back on branding him a pariah over his alleged order to kill Saudi journalist Jamal Kashoggi in 2018. He will also be advised not to make an issue of the human rights in the kingdom.