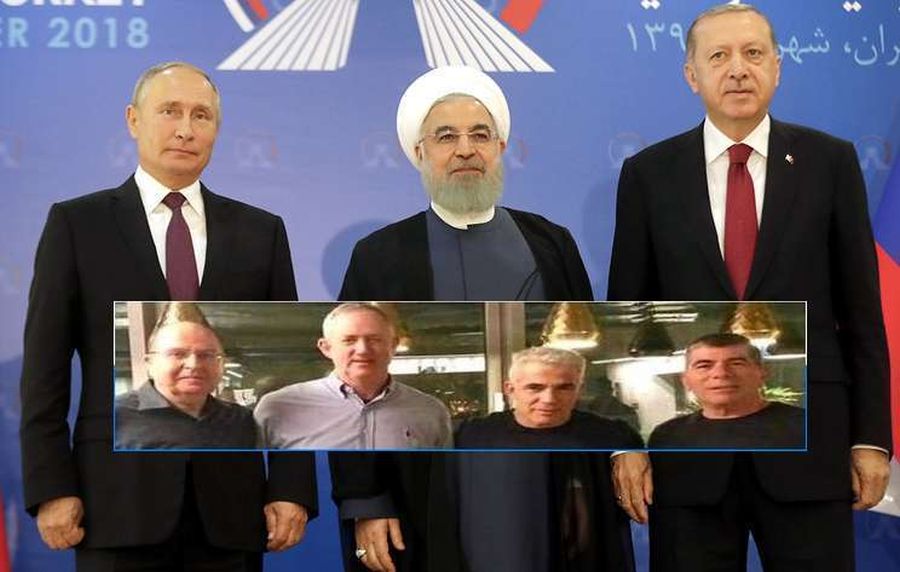 The merged lists of Benny Gatz, Yair Lapid and Moshe Ya’alon released their political platform on Wednesday, March 6. It purports to set out the guidelines for the government which Gatz and Lapid aspire to head after they topple Binyamin Netanyahu in the April 9 election. However, a party headed by three former chiefs of staff, of whom one was also a defense minister, is surprisingly uninformed about current events in the region, especially as regards Israel’s situation.

Item: Above all, Israel is short of a leadership capable of initiating policy for taking advantage of opportunities to change the reality in the region and around our borders. Notwithstanding the IDF’s successful campaign against the strengthening of Hizballah, which is the strongest force in Lebanon today, and Iran’s established presence in Syria, a threatening reality is taking shape over our northern borders. Israeli operations have no effect on the way Putin, Erdogan and Rouhani decide on a settlement for Syria.
DEBKAfile: The presentation of the Russian, Turkish and Iranian leaders as of one mind on Syria may have been partly true six months ago. Today, they are at loggerheads on northern Syria, western Syria and most of all, Idlib province, the last rebel holdout. They are also poles apart on how they perceive Syria’s future and their roles there.

Putin put his discord with his erstwhile partners before Prime Minister Binyamin Netanyahu when they met in Moscow on Feb. 27 and offered him a landmark opening to a new Russian-Israeli relationship. He invited him to take an active role for the first time in the Syrian equation. Their vehicle: a joint Russian-Israeli team for working on the removal of foreign (including Iranian) forces from Syria. (The epic elevation of Israel’s role in international diplomacy was first reported by DEBKA file on March 2.)

Item: We shall call a Regional Conference of Arab Nations Seeking Stability and promote the process of separation from the Palestinians, while steadfastly safeguarding the security interests of the State of Israel and the IDF’s freedom of operation everywhere.

DEBKAfile: Which Arab nations are Blue-White authors referring to? Where would they find a single Arab government ready to attend a conference for this objective?

Item: There will be no more unilateral disengagements in Judea and Samaria or withdrawals from four strategic areas: the settlement blocs, the Jordan Valley, Jerusalem and the Golan.

Item: The a/m regional conference will a discuss an issue of no less importance: Israel’s regional status as a leading force. There will be no more negotiations with Iran on a nuclear accord or a settlement in Syria without the parties, led by Israel, registering  their interests and being addressed.

DEBKAfile: What the would-be future heads of Israeli government are saying is that neither the United States, Russia and China or Europe will be allowed to discuss Iran’s nuclear program, or convene a regional conference on the Syrian question, without Blue-White leaders being invited to attend. Are they serious?