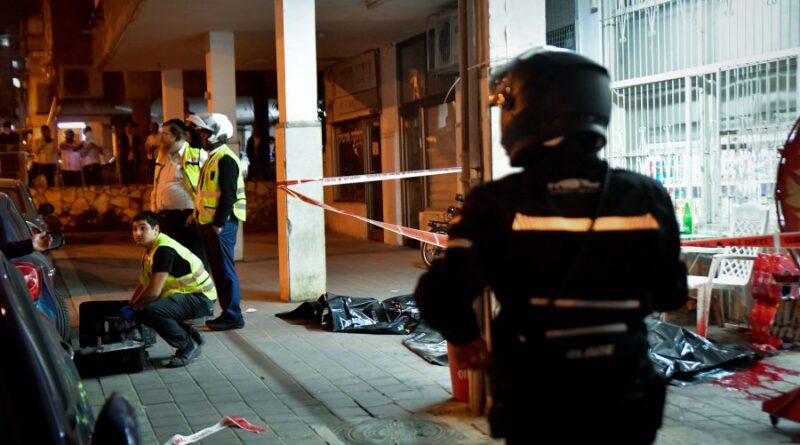 A killing rampage by a Palestinian in Bnei Brak Tuesday night, March 29, was cut short after the first four victims by police Sgt Amir Khoury, 32, who shot the gunman dead and lost his own life in the gunfight. He tackled the terrorist as  a member of the local police motorcycle response team. Two other victims were named as Yaakov Shalom, 36, father of five and Rabbi Avishai Yehezkel, 29, who was shot while sheltering his 2-year son during an evening stroll. He leaves a pregnant wife. The other two victims were Ukrainian nationals, aged 32 and 23, who have not yet been identified.

Polce Sgt. Khouri was an Israeli Arab, resident of the northern town of Nof Galil. The police commissioner called his father, himself a retired police officer, to notify him of his son’s heroic death and offer the family all possible assistance.  The officer is survived by both parents, two sisters and a brother.

Police and security forces are detaining multiple suspects at Ya’bad village in the Jenin region of Samaria, including the brother of the 26-year-old terrorist, Diaa Hamarsheh.

Prime Minister Naftali Bennett said late Tuesday: “Israel is undergoing a wave of murderous Arab terrorism. The security forces are at work. We will fight terrorism with persistence, diligence and an iron fist.”

Five people were gunned to death on crowded streets in the central Israel town of Bnei Brak on Tuesday evening, March 29. A gunman on a motor bike sped through the main streets firing an automatic rifle and killing four people in two locations. When he reached the third, he was intercepted by two policemen and shot dead. One cop was injured in the clash.

The dead shooter was a Palestinian, aged 27, from the Jenin region of northern Samaria, who served time for terrorism and was once employed at a building site in Bnei Brak after infiltrating illegally. He therefore chose familiar territory for his deadly deed. Police detained a second man as a suspected accomplice and heavy forces scoured the town for a third. The mayor asked people to go home, attempting to break up the angry, scared crowds filling the streets.

The attack appears to have been well organized by a three-man gang of terrorists. It differed from the previous assaults in the past week in Beersheba and Hadera in that they were committed by Israeli Arabs who were ISIS followers, whereas the latest one was the work of a Palestinian, although he too was associated with jihadist networks in the Jenin district. The three accounted for 11 Israeli lives in an unprecedented string of deadly attacks within days in major cities located in Israel’s heartland.

Defense Minister Benny Gantz called an emergency conference with security and intelligence chiefs to try and re-evaluate national policy and adapt it to countering a new kind of terrorism. The failure of intelligence to alert the system to the three fatal incidents points to holes in the long-tried counter-terrorism methods of the Shin Bet security service, that may have become obsolete for handling the contemporary generation of terrorists. A common factor in all three was that all the perpetrators were on the books of the security authorities and two at least served time for security offenses. Yet their conspiracies were not picked up.

Another lapse that should have been fixed long ago was the multiple breaches in the security fence boundary between the West Bank and Israel, which allows tens of thousands of Palestinian workers to jump across into Israel day by day – illegally and unhindered.

This time of the year is especially sensitive. Wednesday, March 30, is Land Day, marked by Israeli Arabs as the anniversary of a violent anti-Israel protest, while the Muslim festival of Ramadan is due to begin at the end of this week. The Jewish Passover festival occurs next month, followed by Israel’s Independence Day.

Security is being heavily reinforced in the main towns. The army may be called in as back-up. But these are just band-aids for a fundamental shortcoming in counter-terrorism methods that it is vital to repair even if it takes months.