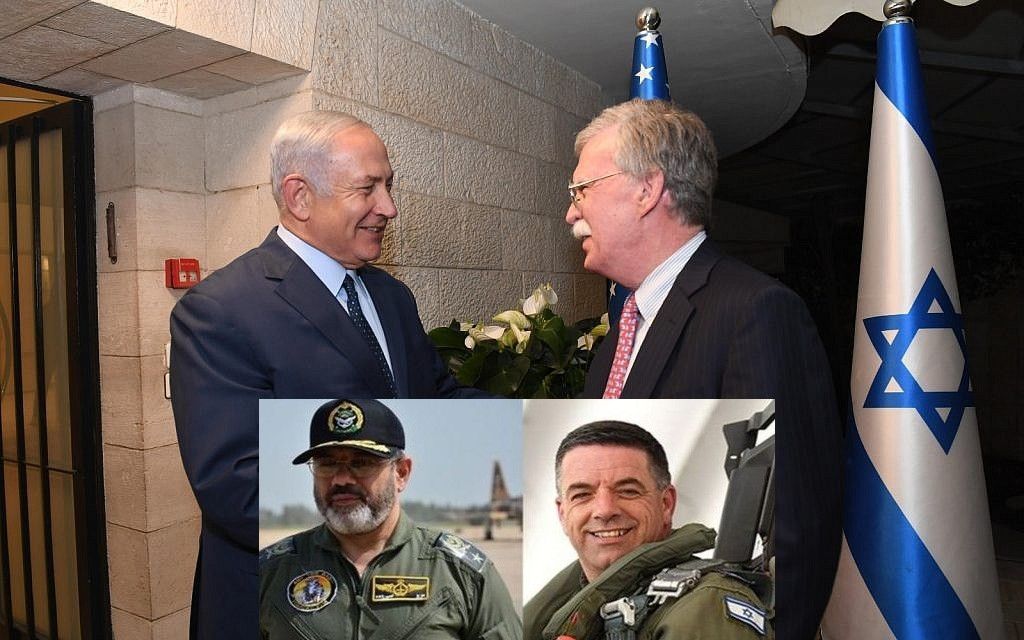 On Aug. 19, the day US National Security Adviser John Bolton landed in Israel, Tehran announced the appointment of a new Iranian air force chief.
DEBKAfile’s military and intelligence sources report exclusively that Bolton’s brief visit for two conversations with Prime Minister Binyamin Netanyahu was his first trip to Israel in his capacity as President Donald Trump’s national securit6y adviser. His mission was to coordinate a military operation between the US and Israel to counter the Iranian military presence in Syria. The US official said frankly, “Obviously we’ve got great challenges for Israel for the United States and the whole world,” he said on arrival, “The Iranian nuclear weapons program [and] the ballistic missile programs are right at the top of the list.” Netanyahu homed in on Israel’s role when he said, “Rolling back Iran’s aggression in the Middle East” – meaning Syria – topped the agenda of this meetings with Bolton.

According to our sources, strategists in Washington, Jerusalem and Tehran appear to share the common assessment that the coming military showdown will consist mostly of aerial and air defense combat. It will therefore be shouldered primarly by Israel’s air force chief Maj. Gen. Amikam Nurkin and Brig. Gen. Aziz Nasirzadeh, whom supreme leader Ayatollah Ali Khamenei appointed this week as Iran’s new air force chief and who, like his Israeli counterpart, also bears responsibility for air defenses.

A parallel to Bolton’s visit to Israel may be found in Mike Pompeo’s talks in Israel last June shortly after his appointment as US Secretary of State. His departure was followed immediately with a round of Israel air strikes on Iranian military targets deep inside Syria, including most notably the bombardment on June 18 of the Iraqi Shiite Kata’ib Hezbollah militia in eastern Syria near Deir ez-Zour.
From Tel Aviv, the US national security adviser flew to Geneva to meet his Russian counterpart Nikolay Patrushev. Their conversation was a sequel to the discussion on Iran’s military presence in Syria that was broached by Presidents Donald Trump and Vladimir Putin at their Helsinki summit on July 16.
The coming issue of DEBKA Weekly out next Friday Aug. 24 will reveal specifics of the tactics drawn up by the US and Israel for the forthcoming operation against Iran in Syria.
If you are not already a subscriber to our premium publication, click here.