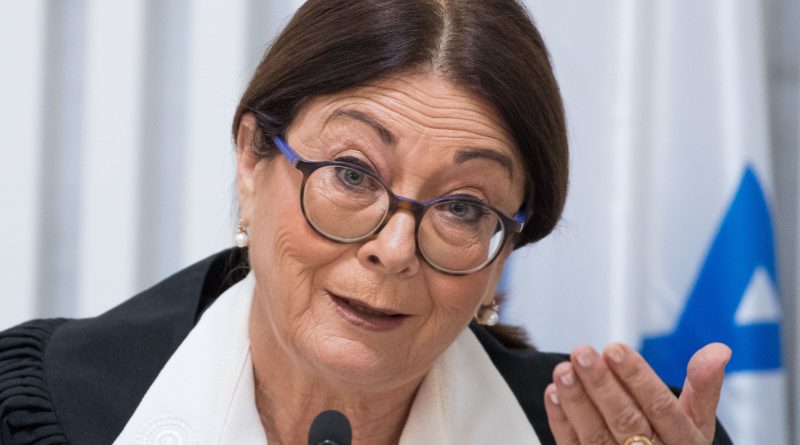 A panel of 11 high court judges must first decide whether they have the jurisdiction to intervene in the Netanyahu-Gantz coalition deal which essentially remodels Israel’s form of government and rewrites Basic Law: Government and Basic Law: Knesset. Will the judges defy the politicians and also claim jurisdiction for ruling on Binyamin Netanyahu’s competence to head a government with three criminal indictments pending against him? At issue more strongly than ever before is the separation of powers between the executive, legislative and judicial branches of Israel’s ruling system.

The controversial coalition accord offered the average Israeli welcome relief from 16 months of agonizing political deadlock and crippled government. However, it was found fundamentally flawed and riddled with anomalies by eight separate groups who petitioned the High Court to overturn the deal.

The judges, broadcasting live and separated by transparent barriers because of coronavirus, know that they are working against the clock. A decision to disqualify Netanyahu would precipitate a fourth general election, since the Knesset runs out of time for choosing a government at the end of this week.

The High Court, chaired by President Esther Hayut, is devoting its first day to hearing the judges’ views on whether a lawmaker under criminal indictment may serve as prime minister. The second day is set aside for addressing questions related to the Gantz-Netanyahu coalition agreement in view of the democratic values at issue. The court’s decisions must be handed down by Wednesday.
Under the agreement to set up a national emergency government, Netanyahu goes first in the rotating premiership and hands over to Benny Gantz at mid-term after 18 months. Both are to be sworn in together as equals and take turns as “alternative prime minister.”
In answer to one petition, Attorney General Avihai Mandelblatt ruled reluctantly that there is no legal impediment for Netanyahu to assume the premiership despite three corruption indictments. Article 8 of the coalition agreement provides another wall: a high court ruling declaring him unfit to serve as premier within six months would force the Knesset to dissolve and call a new election.
Other petitions ask why the terms of the Knesset’s and government in office are curtailed from four years to three. But there are far more serious gripes. The new coalition – the national emergency government for the coronavirus crisis – is empowered to enforce a six-month moratorium on all legislation excepting only laws relating to the pandemic. Enacting new laws without the approval of the two prime ministers would require a majority of 75 instead of an ordinary majority of 61. Senior public service appointments are likewise frozen for six months, including the highly sensitive position of attorney general.

Due to the parity formula between the two partners, the new cabinet will consist of a whopping 36 ministers and 16 deputy ministers, top heavy, cumbersome and unprecedented.
After 78 lawmakers approved the coalition agreement, the Knesset finds its powers for bringing down the government weighted heavily against it. No-confidence votes, for instance, are virtually non-starters, since both Netanyahu and Gantz are prohibited from establishing another government if their shared administration is voted down by a majority.

A particularly sore point raised by the petitioners is the gambit the two leaders contrived after Kahol Lavan bagged the Justice Ministry for Avi Nissenkorn, a socialist. Likud fought to preserve its veto in the nine-member judges’ appointments committee, delaying coalition negotiations over the issue for two weeks. At length, MK Zvi Hauser, a political conservative, who a year ago defected from Netanyahu’s bureau to join Kahol Lavan, was selected for the opposition seat on the committee with the power of veto. The Likud leader celebrated its success in placing a conservative on the Judges Appointments Committee while Gantz  was satisfied with placing one of his followers, nominally a member of the opposition in that seat.

The terms of the coalition agreement as well as the upended factional makeup of the 23rd Knesset have produced an emasculated parliament. Two halves of the same party sit simultaneously in government and on the opposition benches. The splintering process began when Gantz decided to join Netanyahu and set up national unity government. He was followed by half of the party he founded. The other half, led by MK Yair Lapid and his Yesh Atid party broke away, refusing to serve with Netanyahu even in the dire emergency of the covid-19 outbreak.

The pugnacious Lapid ends up as leader of the opposition, ready to trip up his former partner in the prime minister’s office.  He has little to expect from his fellow opposition factions. A confirmed centrist, Lapid finds himself marooned with a hodgepodge of anti-government factions: Avigdor Lieberman’s nationalist Yisrael Beteinu, the far-left Meretz and the United Arab Bloc which Lapid alienated when he ruled its 15 members out of the united Kahol Lavan’s failed attempt to form a government.

The coalition agreement has passed its first reading with the second, third and final readings still to go forward at top speed this week. This groundbreaking legislation moves on a track that may run either parallel to – or at cross purposes with – the High Court hearing and its decisions. The upshot for Israel by the end of this critical week is either a new government or a new election.