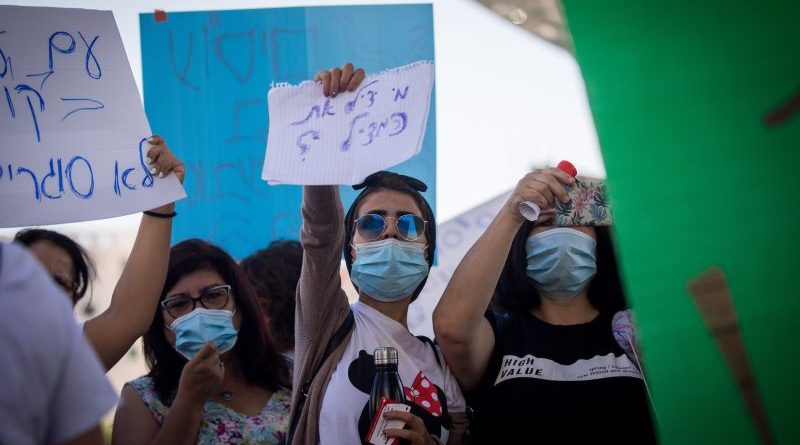 Israel is struggling against the second phase of the coronavirus while losing public trust, the essential tool that helped the government attain world-class success in beating the first stage of the pandemic. That trust is melting fast as, day by day, the virus unyieldingly bites an average of more than a thousand new confirmed cases across the country. On Thursday, July 9, another 1,104 new cases were confirmed, raising the cumulative total to 33,557. The seriously ill rose to 113 from 86 and four new towns were to be swept up for local lockdowns: Bet Shemesh, Jerusalem neighborhoods, Raanana, Ramleh and Kiryat Malachi.

Prime Minister Binyamin Netanyahu’s missed keeping his “48 hours” promise of a financial package by Wednesday night, July 8. This was a red flag to the million people which the pandemic’s lockdowns had thrown out of work and the thousands of bankrupt businesses, especially in the tourism, aviation and entertainment industries. Netanyahu gave that promises during a sharp altercation with business leaders on Monday. The package was to consist of a six-month recovery plan providing a social safety net for all and compensation without delay to all applicants. The Finance Ministry’s Tax Authority was to have then started forwarding the assistance. But the plan failed to materialize on time although the orders had gone out and the money – NIS5 bn – was there. When Netanyahu took the tax officials to task, they told him that their computers were designed for the reverse function of charging taxes and would have to be re-programmed for handing out cash.

That was just one more in a series of glitches, misses and breakdowns thrown up by complacent, hidebound government departments – the worst offenders being the treasury, national insurance and the welfare authorities. These irritants were exacerbated by constantly changing, opaque directives for public behavior. The hospitals alone were consistent in rising to the emergency, but at a high price to staff.

Then, too, the Shin Bet track and trace app, provisionally approved to identify confirmed cases’ contacts and so sever the chain of infection, too often misfired. Many people were wrongly condemned to compulsory quarantine. The Shin Bet operators blamed the Health Ministry for failing to pick up on the results with complementary tests. However, the incarcerated victims, when they phoned the ministry’s emergency line to complain, couldn’t get through.

The fine for failing to wear masks was raised to NIS 500 (around $120) and NIS 5,000 for restaurants who broke the limits of 20 diners inside and 30 seated out of doors. The police who patrolled the streets to enforce these rules were instructed to go easy and approach first offenders with warnings. In a couple of instances, cops were caught on camera violently pinning down offenders or dealing harshly with a minor. Such footage appeared on TV screens and the social networks – another element undermining morale and trust in the authorities.

Coronavirus testing began slowly for lack of staff and facilities and has now passed 20,000 a day. Epidemiological tests are much slower and still short of manpower.

This week, too, Betar Ilit, a small town of 60,000 souls, was placed in a week’s lockdown on Wednesday. The citizens complained that unless the 280 confirmed cases were evacuated, this figure would double and treble in no time, since most belonged to large families living in small cramped apartments. This course was neglected.

Netanyahu’s circumstances have changed radically since he successfully led the country out of the covid-19 crisis in the first two months of the outbreak. He was unchallenged then, when he led the battle against an unknown enemy in nightly broadcasts to the nation, backed up solidly by a compliant Health Ministry. As head of a caretaker government, he was not bound by the Knesset for exercising emergency powers. The public was shocked by an unfamiliar enemy into docilely obeying the stay-at-home rules.

Buoyed up by the steep decline in infection figures, Netanyahu responded to pressing demands to re-open the economy, businesses, schools and public transport. Ecstatic citizens opened their doors to free movement, threw away their masks, and celebrated by crowding restaurants and cafes and dancing at big weddings. Hospitals closed their coronavirus wards.

In May, Netanyu’s Likud and Benny Gantz’s Kahol Lavan formed a coalition government and Netanyahu busied himself with a bid to get the annexation of a part of the West Bank off the ground.

All these actions were ominously premature. Covid-19 had not gone away. It had only regrouped and was creeping up for a bigger assault in the last two weeks of June. By then, Netanyahu was forced to push his decisions past a conflicted, elephantine government of 36 ministers and a parliamentary opposition raring to show its mettle. On July 3, before imposing restrictions for combating the surging spread of coronavirus, the prime minister had to ask the Knesset for a special measure to allow government to respond swiftly without waiting for advance parliamentary sanction. This took three precious days. When he was criticized for circumventing democratic institutions, Netanyahu cited other democracies which had resorted to emergency regulations in times of war.

The experts expect coronovirus to be around for another year or even more. The unwieldy, shambling government and its departments must revise their rigid attitudes and reform to dispel the people’s spreading mood of hopelessness and distrust. Without close public cooperation in observing health rules, coronavirus will not be subdued sufficiently for the country to return to a semblance of normality. Huge amounts of compensation that eventually reach the jobless and ruined business owners will calm some of the disaffection. Capital will also have to be laid out to stimulate economic recovery and ward off or minimize a recession.