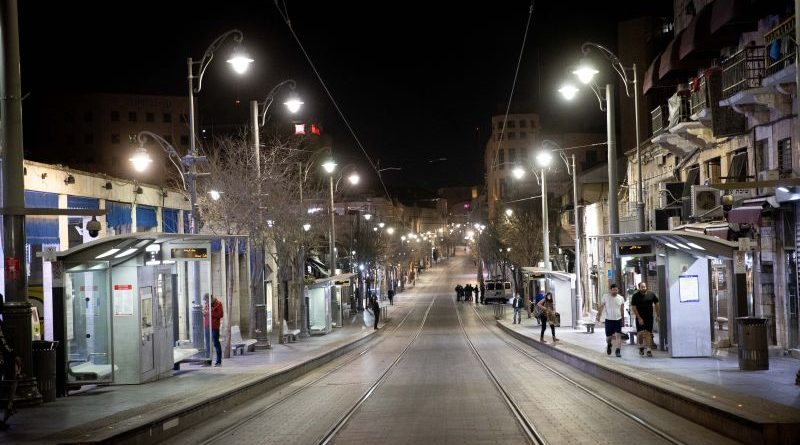 The first and largest human laboratory for the contest between vaccination and covid plus variants is offered by Israel, with its crash program of vaccinations combined with a stringent lockdown. The deadline for first results has been set for late March, when PM Binyamin Netanyahu promises the country will be out of the woods and ready to go back to pre-pandemic normal.

For now, the woods are closing in darkly. Friday and Saturday saw a relentless increase in the number of mortalities – more than 60 new deaths, raising the total to 3,645 since the outbreak began and 993 seriously ill patients out of a the 1,710 in hospital. The ultra-religious Jewish and Arab communities show the highest numbers of infection, But they along with the general public are more ready to cooperate with the strict two-week lockdown that went into effect at Thursday midnight, although police roadblocks were out to boost enforcement on the highways and in towns. (See photo of Jerusalem downtown.)

Cheer came from the announcement that the government’s crash vaccination program would continue this week without pause, made possible by a new deal with Pfizer for the delivery of hundreds of thousands of new doses per week from Sunday, up to 10 million doses by March.

A record of almost one-fifth of the population has so far been immunized. Administration of the second doses began on Saturday night and will continue alongside the next round of jabs for teaching and other essential staff and Israelis of 50 plus. Health officials offer a timeline of two to three weeks for immunizing all Israelis over 16.

Pfizer had decided that immunizing the population of a whole country provides a priceless framework for the final mass trial of its product. The World Health Organization like the company is eagerly awaiting results.

Vaccinations en masse meanwhile offer additional benefits over and above direct protection against a virulent plague, said the Health Ministry’s Public Health Director Dr. Sharon Alroy-Preis, in a TV interview on Friday. Herd immunity may evolve, is one, she said, and preventing virus mutants from developing before they take root, is another. The manufacturers will have access to verified data for research into improvements and further development of their vaccine.

Dr. Alroy-Preis promised that transferring the data to the pharmaceutical giant would breach no individual privacy codes. They will receive only information that is provided to the public, she said, including “How many cases, how many serious cases, how many fatalities, how many vaccinated.”

Medical professionals continue to believe the current vaccines provide protection from the new covid mutations, though data is not yet comprehensive enough for a final determination. However, a joint Pfizer and Texas University research showed in its first trial the company’s vaccine capable of killing the British and the South African strains, although it has yet to be exposed to peer scrutiny. After the British covid mutant was discovered in different parts of the country, partly accounting for the soaring infection, four cases of the South African variant were identified, both sourced to people who returned from South Africa or were in contact with them.