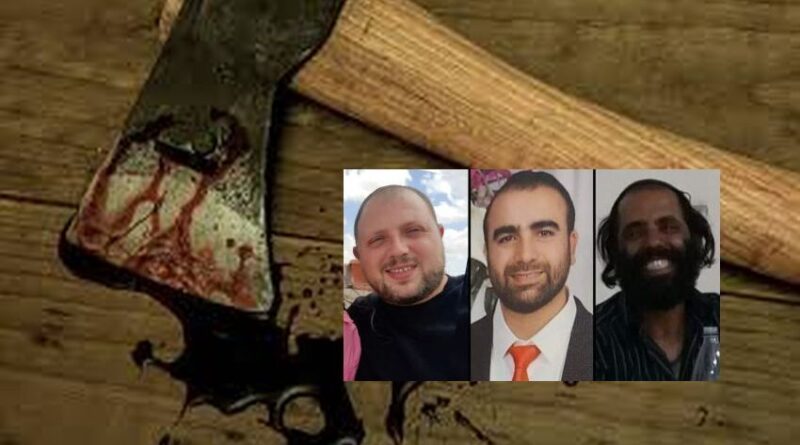 The two Palestinian terrorists who with savage axe  blows murdered three Israeli men, Oren Ben Yiftah, Elad Boaz Gul and Yonatan Havakuk, and injured five in the central town of Elad on Independence Day were captured three days later on Sunday morning, May 8. Assad al-Rifai and Soubhi Abu Shakir were still hiding in Israel not far from the scene of their crime in the Nahshonim forest between Elad and the town of Rosh Ha’Ayin. The police, Shin Bet and the IDF jointly announced the capture. The fugitives were picked up in a state of exhaustion without food or water. The news delayed the regular Sunday cabinet session by half an hour.

The evidence from the probe into the three Independence Day axe murders in Elad reveals major gaps in Israel’s handling of the new Palestinian tactics of terror. While details of the probe are under a court-imposed gag, those gaps are plain to see. The axe-killers, Assad al-Rifai, 19, and Soubhi Abu Shakir, 20, both from the village of Roumana in the Jenin area in northern Samaria, were familiar faces in Elad. One was sighted on Thursday, a day before the attack, cruising around the town. On the day itself, he was seen going into a building and shouting Allahu Akbar. A call midday to the police failed to raise the alarm.

Had the fleet of police cars rushing to the scene at 8 pm on Thursday arrived eight hours earlier, the tragedy may have been averted.

As it was, the first victim, Oren Ben Yiftah, a 35-year-old driver from Lod, actually drove the two axe-killers from the Green Line barrier, allowing them to sneak across into the ultra-religious town, as they had done before to take up jobs without a permit. After murdering Ben Yiftah, the terrorists headed to Ibn Gvirol street and a park, where they killed Elad residents Yonatan Havakuk and Boaz Gol. The three victims, in their 30s or 40s, were mourned at their funerals on Friday by their widows and 16 children.

The two killers may have got away in a car. They are still being hunted by massive forces on both sides of the Green Line security barrier. It is an open secret that Palestinian car thieves run a thriving racket in stolen Israeli cars and may have provided the getaway car.

Still lagging after events, Police commissioner Yakov Shabtai on Friday ordered a massive operation to detain Palestinians without permits in Israel, and penalize the drivers and employers, especially building contractors. Until now, the authorities turned a blind eye to this source of cheap labor, detaining around 7,000 out of the roughly tens of thousands strolling through yawning gaps in the security fence day by day. Areas around this boundary were suddenly packed on Friday with security forces.

But for how long? And why was this action taken only after Palestinian illegals had committed 19 cruel murders of civilians in five weeks in the Israeli heartland cities of Beersheba, Tel Aviv, Hadera, Bnei Brak and now Elad? Why were security measures abandoned for civilians at normal work and play on main city streets?

This lack offered the new Palestinian terrorist easy game. It was picked up by the Hamas leader Yahya Sinwar, a four-time indicted terrorist, who last week called on young Palestinians to turn their guns on the Jews. “If you have no guns, use axes or butchers’ knives!” he shouted.

Since March, a concentrated counter-terror operations has been in force in the hotbed Jenin area of northern Samaria and the primary source of the current wave of Palestinian terror. Elite units of the IDF, Shin Bet, Border Police and Police have rounded up hundreds of suspects for interrogation. The Elad atrocity should have been prevented. That it happened, points to the shortcomings of Israel’s existing counter-terror methods of prevention and intelligence -gathering.

As a former Shin Bet chief Avi Dichter put it, “Successful intelligence gathering targets terrorist organizations.” Assad al-Rifai, 19 and Soubhi Abu Shakir had no known affiliation to any of the terrorist groups, although Hamas and Islamic Jihad both heaped praise on their action, and their names are not on any past records. As one Palestinian source noted: “One axe is worth a thousand rockets.”

Pushed by the Elad outrage, Israel’s government heads have launched a fundamental rethink of protective measures against the new wave of Palestinian terror. This will mean going on the offensive. Targeted assassinations of leadership figures are high on their list of options, even at the cost of spurring a fresh outbreak of rocket violence from the Gaza Strip or even by Palestinian backers in Lebanon.