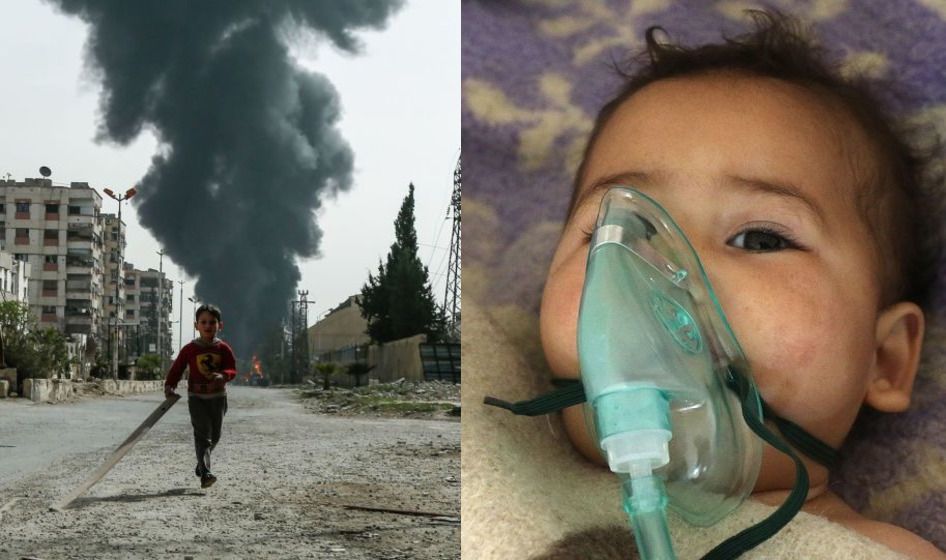 People are dying, but the provenance of the chemical tools of war has become more a matter of politics than of fact.

The exact scope and nature of the disaster overtaking the conflicted Douma war zone of East Ghouta outside Damascus are becoming more elusive as allegations fly back and forth. Jaysh al-Islam, the rebel group holding Douma, was first to accuse the Syrian army on Saturday, April 7, of attacking the people of Douma with poison gas, causing 500 casualties. By Sunday, the death figures reported varied between 150 and 500.
The US State Department cited at least 43 deaths. First responders reported whole families suffocated in their homes and shelters with foam on their mouths. Then, President Donald Trump, called out Putin and Iran for backing “Animal Assad,” whose air force helicopter was accused by rebel forces of dropping a barrel bomb full of sarin on the civilians of Douma.

Both Damascus and Moscow deny the allegation, accusing Syrian rebels of fabrications. Russia issued a statement on Sunday warning that foreign military intervention under “far-fetched, fabricated pretexts” in areas in Syria where Russian servicemen are deployed “might lead to very severe consequences.”

Despite the heated rhetoric, DEBKAfile’s Middle East sources don’t see any immediate change in the current situation. Russia is not about to change its policy in Syria and the Americans don’t appear ready for any further action, certainly not a repeat of the 2017 missile strikes on a Syrian air base in response to a Syrian chemical attack.  Some sources in Washington suspect that certain Syrian opposition groups are turning up the heat in the hope of prompting a US military surge in Syria, in reversal of President Trump’s announced intention of bringing US troops home.
Whether chemical weapons were indeed used against Douma civilians may never be definitely proven one way or the other – and even then, it may not be possible to nail the party responsible. The same opacity covers the poisoning of former Russian agent Sergei Skripal and his daughter Yulia, who was on a visit from Moscow when they were struck down by a nerve agent in Salisbury, UK on March 4. Both are recovering in a local hospital. The British accuses Russian President Vladimir Putin and his spy services of the attempted assassination, while Moscow fingers British intelligence for culpability. The Russians summoned the watchdog Organization for the Prohibition of Chemical Weapons for an investigation into the source of the gas agent and demanded a role in the probe. London has refused Moscow access to its investigation.

The OPCW’s record for getting to the bottom of chemical warfare allegations is sketchy. The organization was granted full authority for a full-scale probe only once, in the years 2014-2015, when the US and Russia agreed to wind down Syrian chemical stocks. The Assad government claimed to have destroyed those stocks, but later turned out to have pulled the wool over the eyes of the OPCW monitors. Since then, poison chemicals are increasingly prevalent in the Syrian war and the public, while far from accepting this war crime, is not as horrified as it once was.  Indeed, disinformation about the use of illegal chemicals in war has evolved into a handy tool of propaganda in international contests.