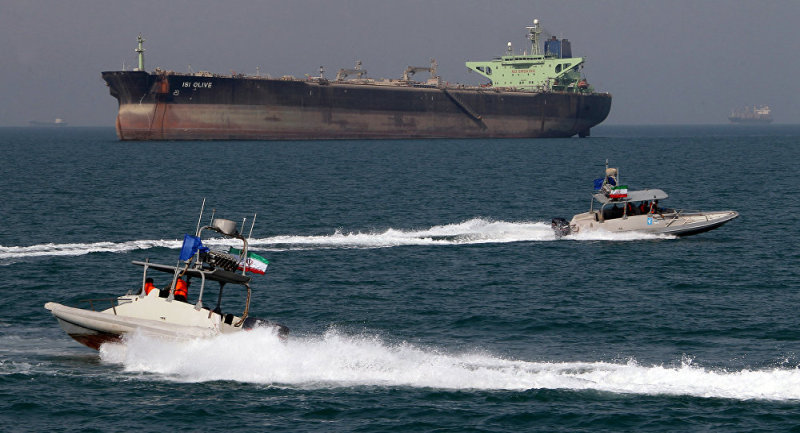 Iran is running out of storage space for the billions of barrels of unsold oil with which it is stuck by US sanctions on its main export. Tankers, new and old, are being pressed into service to accommodate the surfeit. They are moored at different places around the Persian Gulf and the Red Sea.

The Pacific Bravo owned bythe Chinese state company CNPC provided the first window into Iran’s storage plight and makeshift solutions. The tanker was caught on video heading east after loading 2 million barrels at the Soroosh and Kharg terminals on May 17 and believed to be bound for home port in violation of US sanctions. This was shortly after the Trump administration revoked all waivers on oil purchases from Iran, including the one granted China. But then the ship, after sailing to Indonesia ended up in the Gulf of Oman off the Iranian coast.

An Iranian oil industry source revealed to the WSJ on Tuesday, May 28, that the vessel was being used only for storage.

Iran’s oil industry is forced to keep going, although its May exports dropped to half-a- million barrels per day, less than half its output in April. The costs of restarting production after a standstill would be prohibitive. Tehran is therefore struggling with the problem of space for storing colossal quantities of unsold crude.

Updated information from companies tracking oil flows shows that the amount filling onshore stores had risen to 46.1 million barrels out of a total capacity of 73 million barrels, the highest since January. Another 13 million barrels are kept in the holds of 12 Iranian tankers stationary since March.

China has pitched in to help, but how many of its supertankers were made available for easing Iran’s quandary and where they are berthed is unknown. Beijing may not be the only government offering storage space for unsold Iranian oil. Two weeks ago, the crew of the UAE-owned Suezmax crude oil tanker, the Sea Shark, made a distress call to the Russian Tass news agency. Carrying a shipment of crude oil loaded at the Kharg Island Terminal, the ship had sailed to Suez in late October 2018 where it was stopped to wait for further instructions and a flag change, since “the Panama flag registry had expired.” The cargo was then believed to have been bound for delivery in violation of US sanctions – probably to Syria.

But meanwhile, in November 2018, it was seized by the Egyptian navy for “illegally entering Egyptian waters,” although the crew clamed the Sea Shark had moved some 2nm into Egyptian waters only to avoid the heavily-trafficked waters of Red Sea shipping lanes. The tanker was reportedly then taken to Ras Banas anchorage in southern Egypt and kept there until April 25. Two days later, it moved north to the Sokhan Red Sea coast where it has anchored ever since. The crew now claims that Egypt has demanded a $56 million fine from the ship’s owner before releasing the ship. The owner is trying to appeal, while the crew is held on board and growing frantic. They are marooned on the vessel with some 1.1 million barrels of oil, worth some $75 million, The crew consists of 17 Ukrainians, two from Crimea, one from Azerbaijan and 11 from the Philippines, Sri Lanka and India.

Shipping and oil industry sources suspect that this rigmarole is the cover story to conceal the Sea Shark’s conversion as a large oil storage facility for Iran and wonder how many tankers are berthed in remote anchorages as offshore storage platforms for excess Iranian crude. Short of cash, Tehran may be scrounging on the sellers’ market for elderly tankers in poor condition for this purpose. China may be providing Iran with onshore storage facilities as well as tankers like the Pacific Echo in order to help Tehran survive US sanctions. Washington has not interfered in this traffic.