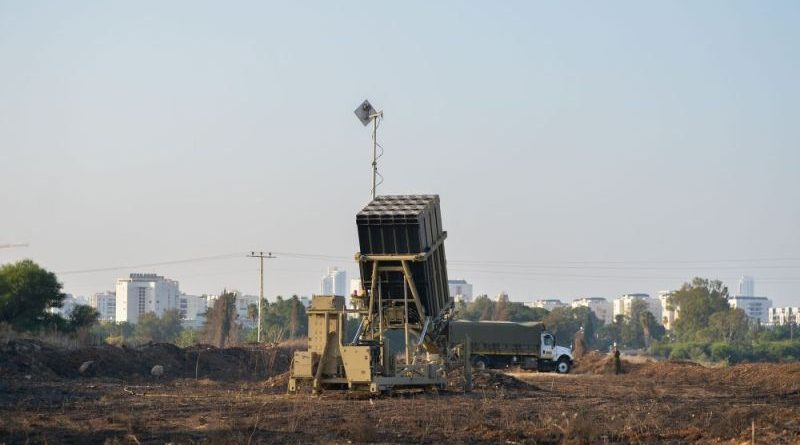 Security authorities at IDF General Staff HQ in Tel Aviv discovered last September that the blueprints for Israel’s Iron Dome short-range anti-rocket system had been stolen. Every attempt to establish how the thief had managed to pierce the layers of physical and electronic security guarding one of Israel’s crown jewels drew a blank.

According to DEBKA Weekly’s intelligence sources, the finger of suspicion has fallen mainly on the China Ministry of State Security-MSS using Huawei equipment to obtain the data through a “back door.” Furthermore, many Chinese firms have set up offices in high-rise buildings located very close to Hakirya, Israel’s Security City in Tel Aviv. Those offices are believed to be used for spying on the IDF General Staff HQ and the Defense Ministry housed there, with the help of sophisticated Huawei electronic equipment.

The theft of the Iron Dome’s secrets, presumably by China, is a highly sensitive matter – and not just for Israel. It also impinges on its close security and intelligence collaboration with the United States.

Last week, Washington again demanded that Israel bar the heavy investment of Chinese-made systems and components in the communications and security systems of its infrastructure. The Shin Bet issued a fresh directive to that effect from the National Cyber Directorate.

An earlier directive was voluntary. This one was meant to be compulsory. It applied o the use of communications components, security cameras and their control boxes, WiFi systems and other components used in computer networks, due to the risk of their use for video and audio surveillance.

The Trump administration, which is pushing hard to isolate Huawei from developing a larger foothold in US partner countries, is furious over Israel’s lackadaisical response to its warnings of Chinese cyber intrusions. Part of the problem is the multiplicity of Israeli agencies engaged in cyber warfare and information security, a sure recipe for competition and crossed wires. The most senior is the National Cyber Directorate, followed by Military Intelligence, the Defense Ministry’s department of field security, the Atomic Energy Commission, the Justice Ministry’s Privacy Protection Authority and also the Mossad external security service and the Shin Bet.

Four years ago, Washington tried to prevent the Israeli government awarding a tender to the Shanghai International Port Group (SIPG) for the construction and operation of the new Haifa Port for 25 years. Another Chinese firm won the bid to build a new port at Ashdod. The US concern is that the Chinese government which holds a major stake in SIPG will be able to spy on US Navy Sixth Fleet ships which regularly visit Haifa port, where also the Israeli Navy’s submarine fleet is based. Washington has warned Israel of the perils of the Chinese involvement in other huge infrastructure projects – such as the Mount Carmel tunnels and the light-rail train around the Tel Aviv Hakirya, which will be operated mostly with Huawei equipment and could open back doors to filch additional Israeli high-value security secrets.

In recent secret conversations, US officials threatened to cut off essential intelligence and technological sharing feeds unless Israel acts to bar China’s incursion of its economy and stops using Huawei wireless networks in building fifth-generation equipment.

The same threat has also failed to deter America’s European allies from using Huawei telecommunications in their G5 wireless networks. The UK’s Boris Johnson has called President Donald Trump’s bluff, followed by Germany and France. All have refused to exclude Huawei from their advanced networks, although all three say they are employing rigorous restrictions to protect their security.

Europe was by and large unmoved when US Secretary of State Mike Pompeo and Defense Secretary Mark Esper condemned China as topping the Pentagon’s list of potential adversaries at the global security conference in Munich last Saturday. Esper warned US allies against “going the Huawei route” lest they jeopardize information sharing and undermine the alliance.