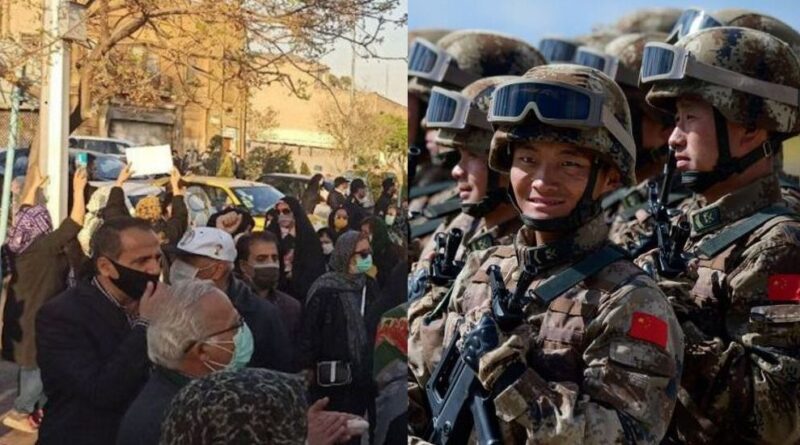 Beijing is preparing to transfer 5,000 Chinese troops to Iran to guard its $400bn investment in the country over the next 25 years. Military engineers are prospecting sites for their bases. This deployment was covered in the investment-cum-strategic accord signed in Tehran on March 27 by visiting Chinese FM Wang Yi and his Iranian counterpart Mohammed Javad Zarif.

Gulf and the Western intelligence sources report that this substantial Chinese military presence in Iran, the first in the Gulf region, will mark out the formation of a strategic axis linking China, Iran and Pakistan, two of which are nuclear powers. It will add another section to the CPEC [China-Pakistan Economic Corridor] project underway in Pakistan, as part of Beijing’s $8 trillion Border and Road Initiative (BRI) projects for spanning Asia and Europe. The CPEC is to provide a safe passage and a shorter route for Iranian oil, gas and petrochemicals, sold at cut-rate prices, to reach China.

The 5,000 Chinese troops to be posted in Iran, DEBKAfile sources reveal, will join the rarely noticed presence of 10,000 Chinese military personnel in the east African port of Djibouti,, so topping up Beijing’s military strength athwart more than one sensitive corner of the Middle East to 15,000 troops.

The locations of the new Chinese bases in Iran are still under discussion. One is likely to be a seaport – either on Iran’s Gulf coast or at Chabahar, an outlet to the Gulf of Oman where the Revolutionary Guards Crops (IRGC) navy maintains a large installation. This location would strengthen the Iran-China-Pakistan connection. Also under discussion is a site close to Iran’s key nuclear facilities, which would seriously complicate any Israeli plan for an air strike against its nuclear program.

The mew pact is a gamechanger in more than one respect. It draws some of the sting from the US sanctions imposed on both partners, by partially covering Iran’s losses from the US embargo on oil sales. The deal gives the IRGC access to sophisticated military hardware and points the oil-rich Gulf nations to an alternative source for cutting-edge weaponry after the Biden administration paused large-scale arms sales to Saudi Arabia and the UAE.

While the deal serves the ends of the Islamic regime and the Guard, who will certainly get their cut of the Chinese bonanza, it has aroused some popular resentment. Last Tuesday, several hundred Iranians gathered outside parliament in Tehran, in Isfahan, Alborz and other towns to demand the annulment of the pact with China and the future deployment of Chinese troops in their country. Former President Ahmadinejad is said to have a finger in the movement. The protesters chanted such slogans as “Iran is not for sale,” “Death to those who sell the homeland,” and “We will fight, we will die and we will take Iran back.” They hoisted placards marked: “China, get out of Iran.”  In Australia, Iranian expats demonstrated outside the Chinese Consulate.

Israel too has extensive economic ties with Beijing, to which Washington strongly objects, including the new port a Chinese firm is on contract to build in Haifa with a 25-year management lease. Jerusalem therefore has so far hesitated to respond to the massive Chinese investment in Iran. Beijing, in active expansionist mode in the region, this week indicated that invitations would be extended to Israeli and Palestinian delegates to use China’s good offices. China may next seek out a mediation role for the conflict between Israel and Iran.