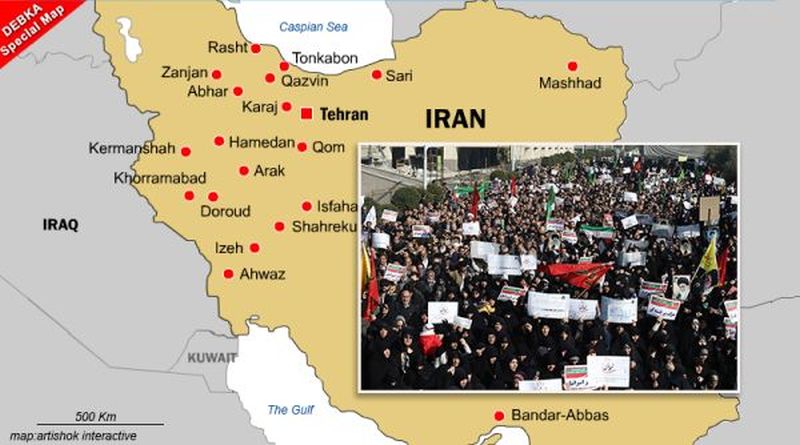 Far from being spontaneous, the anti-government protest movement which erupted in Iran on Dec. 28 was a component of a comprehensive clandestine campaign launched by a coalition of Western and Middle East intelligence agencies against the Islamic Republic. This secret war was unearthed by DEBKA Weekly’s intelligence sources.

There was no New Year holiday leave for the National Security Council in the White House, the MI6 in London, the BND in Berlin, France’s DGSE, Saudi General Intelligence in Riyadh or Mossad headquarters outside Tel Aviv. Their eyes were fixed on stage one of a project long in the making for bringing the popular dissent seething in Iran to the surface.

The policy thread running through Donald Trump’s conduct of foreign conflicts in which the US has an interest is mostly for local elements, rather than US troops, to spearhead the action with American backing and support.

This policy was apparent in the first stages of the new campaign launched this month against the regime in Tehran:

The most important is the Mojahedin-e Khalq – the National Council of Resistance of Iran – a political-militant organization which, from its foreign base, advocates the violent overthrow of the current regime. There are also Iranian-Arab underground networks operating in the country’s southern oil-rich regions with ties to Saudi and United Arab Emirates intelligence agencies. Then, there are clandestine groups operating in Iraq through Iranian Kurdish underground networks.

These groups and cells determined the strategy of the first stage, which was to spread the protest rallies as widely as possible across the country. Unlike the last upheaval in 2009 (a political protest against a rigged election), these demonstrations by and large avoided the big towns, especially Tehran, where security forces loyal to the regime are thick on the ground. They mostly stuck to outlying areas and small towns where poor people and disaffected minorities, Azeris, Baluchis, Arabs and others, were more than ready to march against the Shiite regime.

The foreign intelligence agencies behind the movement were fully in the picture. This stage of the anti-government operation was indeed based on Iranian dissident groups activating their underground cells inside the country. However, the campaign had been in the works in Washington, of and on, for seven years. Even when Barack Obama (2009-2016) ordered his administration to shelve US support for Iranian opposition groups, the quiet preparations continued. Soon after Donald Trump’s election and his appointment of Gen. H.R. McMaster as national security adviser and Mike Pompeo as Director of the CIA, the preparations were switched back to fast forward.

The campaign was piloted by domestic Iranian opponents of the regime, with Western and anti-Iranian Arab support from the outside, because the highest importance was attached to keeping the demonstrations free of the slightest evidence of American, Saudi or Israeli intervention. Such evidence would have given the regime the pretext for cracking down on the first rallies with gunfire and causing a bloodbath. Iranian intelligence agencies, including supreme leader Ayatollah Ali Khamenei’s, personal spy service, were not able to find such evidence, though not for want of trying. Their hands were therefore tied for a brutal crackdown, because it would have been an admission that a popular, grass roots movement had risen against the regime.

Tehran, Washington and Riyadh therefore shared an interest in pretending that the outburst of protest was spontaneous and caught them by surprise.

British Foreign Secretary Boris Johnson undertook a last attempt to build a bridge between Iran and the Trump administration, Riyadh and Abu Dhabi, when he visited Tehran on 8-10 Dec. He was all fired up for a discussion on the main bones of contention, i.e., Iran’s ballistic missile program, Yemen, Syria and Iraq, but was brought up short by a flat refusal to discuss these issues by President Hassan Rouhani and Foreign Minister Muhammed Jawad Zarif. Johnson left Tehran with just one piece of information: Iran’s leaders were expecting an outbreak of street demonstrations but had no notion when it would happen or who was setting it up.

While the cautious, controlled organization of the street rallies in Stage One had indicated the presence of guiding hands, Stage Two saw rising stakes.

On Sunday, Dec. 31, Day 4, small groups of underground dissidents opened fire for the first time on police forces. The casualty toll began rising. Monday night it shot up to 21, including the first police casualty.

Tuesday morning, Ayatollah Khamenei accused unnamed “enemies” of stirring dissent in the country, using “cash, arms and intelligence agents.” His words were meant to deter the protesters from staging the general strike they had threatened for paralyzing the economy. At the time, there was no knowing who were the organizers, whether the stoppage would be indefinite and all-embracing or confined to certain branches. The government was concerned to avert the shutdown of essential enterprises, especially oil exports.

Khamenei’s menacing words had their effect. The protesters failed to make good on their threatened strike. Many took fright from his accusation of “foreign intelligence agents,” which raised the specter of treason and other charges that carry the death sentence.

The regime acted swiftly on the first day of the protests to shut down Internet communications and social media. But Western agencies quickly drove holes in the closures to keep information flowing among the various groups of street demonstrators and ringleaders. They also attacked official Iranian security sites to disrupt their attempts to quell the unrest. (More about this in a separate article)