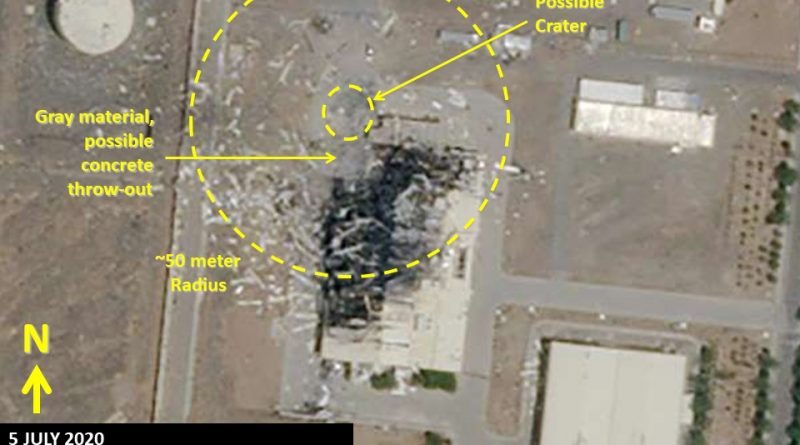 Iran is caught in a dilemma between hiding the true scale of damage caused to its nuclear program by the Natanz explosion and fire and the urge to punish the culprit.  On July 10, Foreign Ministry spokesman Abbas Mousavi warned of “consequences” to foreign elements proved to be involved. He also hedged it round by saying it was “too early” to judge “the main cause and reason for the blast.”. He criticized media reports attributing the explosion to Israel for “portraying Israel as powerful.”

Tehran knows perfectly well the exact cause and reason for the Natanz blast on July 2 (which occurred less than a week after an explosion at a secret underground tunnel system and missile production site east of Tehran.) They may not admit this, but they know that the damage to the Iran Centrifuge Assembly Center (ICAC) at the Natanz enrichment center was “extensive, severe and possibly irreparable,” according to analysts David Albright, Sarah Burkhard, and Frank Pabian of the Institute for Science & International Security.

The ICAC, inaugurated in 2018, was critical to the mass production of advanced centrifuges, in particular the assembly of rotor assemblies and its key component, the rapidly spinning part. An annex to the building was intended to assemble electrical components, including motors.

Enriched uranium is essentially used for both civil nuclear power generation and military nuclear weapons. Iran’s new advanced uranium centrifuges at Natanz were intended to accelerate its ability to produce enough enriched uranium to make a bomb in the short term.

Satellite imagery further shows that the damage appears to have been caused by a large single point detonation, possibly creating a crater that is centered at the northwest corner of the ICAC. That explosion, evidently causing or coinciding with a fire, may well have involved an explosives device.

The true extent of the damage was publicly withheld by Iran.  It was not until commercial satellite imagery became available that the true nature of the damage could be observed. It is clear from the imagery of Airbus/CNES and Planet Labs that a major explosion took place, destroying nearly three quarters of the main centrifuge assembly hall, generating a fire that blackened a major portion of the building, the blackening visible where the roof had been blown away by the explosion. Although we had originally concluded, based on the ground imagery, that the explosion and fire had most likely occurred in the northeast corner of the building in an area of the building that likely contained auxiliary diesel generators, it is now clear from the overhead satellite imagery that the explosion was actually centered at the northwest corner.

Unlike the northeast corner, which was blackened by fire and exhibited signs of some structural damage, the northwest corner of the ICAC building, including a large portion of a brick-walled annex, was completely obliterated. Moreover, a debris field of building materials (primarily roofing panels) is also distributed in a roughly radial pattern, extending to a radius of over half a football field, from that same point. What we perceive might be a crater, roughly 10 meters in diameter, that is visible in the center of that circular pattern. What appears to be some gray concrete throw-out material is also visible in the area where the corner of the building had been. That center-point of the possible crater is located just outside the building, which would be accessible by vehicle, suggesting that a vehicle-borne explosives device cannot be ruled out at this time.

The centrifuge assembly building was said to be intended to mass produce IR-2m, IR-4, and IR-6 centrifuges. Mass production translates to the combined production of thousands of such centrifuges per year. Iran placed next-generation uranium enrichment centrifuges at its Natanz enrichment facility as part of a program it could tap to produce a nuclear weapon. Under its 2015 nuclear deal with six powers, Iran agreed to install no more than 5,060 of its oldest centrifuges at Natanz until 2026. Last year, Tehran began rolling back its commitments to the accord in reprisal for US withdrawal. And by November, Iran had doubled the number of advanced centrifuges operating at Natanz.

Although the explosion and fire at the Iran Centrifuge Assembly Center does not eliminate Iran’s ability to deploy advanced centrifuges, such as the IR-2m’s, its destruction must be viewed as a major setback to Iran’s ability to deploy advanced centrifuges on a mass scale for years to come. Some estimates say that the Islamic Republic nuclear weapons program has suffered a delay of up to two years.