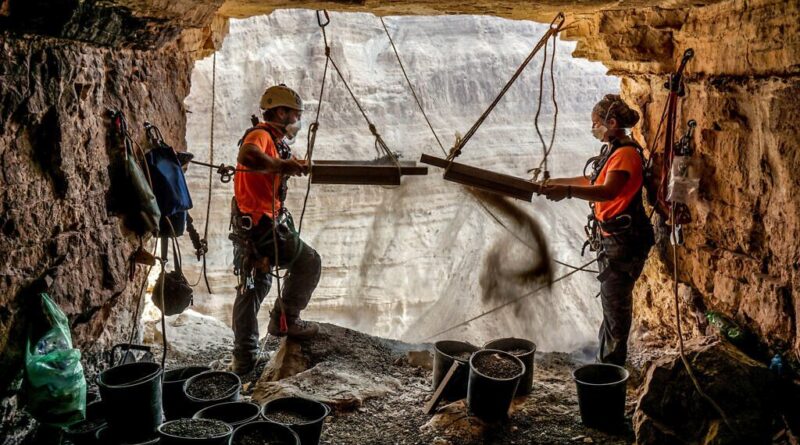 The first Biblical scroll fragments to be discovered in 60 years are among the awesome relics unearthed in Israeli Antiquities Authority excavations in the most remote caves of the forbidding Judean Desert. More than a score of 2,000-year-old Greek translations of the books of Zechariah and Nachum were discovered with only the name of God written in Hebrew, as well as a 10,500-year-old woven basket and the 6,000year-old, mummified skeleton of a six-year-old child.

The expedition to uncover the secrets of the ancient desert was launched in 2017. After all efforts to stop the rampant looting of priceless sites, fired up by a Bedouin shepherd’s sensational discovery of the Dead Sea Scrolls 70 years ago at Qumran, the Antiquities Authority mounted an inter-departmental, national project to beat the robbers at their own game.  Since then, expeditions have exhaustively investigated every nook and cranny of this untamed wilderness.

The scroll fragments were found in the craggy “Cave of Horrors” – so named for its inaccessibility. Flanked by gorges, some 80 meters below a sheer clifftop overlooking the Nahal Hever, this cave can only be reached by rappelling precariously down the crumbling cliff face.

In a press release on Tuesday, March 16, Israel Antiquities Authority’s director Israel Hasson, who led the wide-ranging rescue operation, praised the teams’ courage, dedication and devotion in daring expeditions to reach one cave after another, while swallowing tons of suffocating dust in arid desert conditions, and returning with gifts of immeasurable worth for mankind.

So far, around 80 sq, km have been surveyed and mapped by three teams, led by IAA archaeologists Oriah Amichai, Hagay Hamer and Haim Cohen. Using drones and high-tech rappelling and mountain-climbing gear, the archaeologists and a team of volunteers from pre-military academies were able to access “inaccessible” caves — some of which had seen no human face in nearly two millennia.

On Tuesday morning, a sample of the dazzling discoveries were unveiled for the first time. Crowning them are the 20 or so biblical scroll fragments, found in rolled up batches. The IAA experts have reconstructed 11 lines of Greek text translated from Zechariah 8:16–17, as well as verses from Nahum 1:5–6. The name of God appears in the Paleo-Hebrew script that was used during the First Temple period. It also served some followers of the Bar Kochba revolt (132–136 CE), against the Roman conquest and was found in contemporaneous coinage. The same script recurs in the works of the Qumran Essene community of Qumran.

The woven basket, a massive 90-100 liter receptacle, some 10,500 years old, is believed to predate by a thousand years the first known pottery vessels. This Neolithic basket woven from plant materials was preserved intact due to the region’s exceptionally arid climate.
That same climate also accounted for the poignant discovery of a six-year-old child, whose mummified remains were carefully wrapped around in a blanket some 6,000 years ago. Rare samples of surviving hair, skin and tendons are being scientifically apprised.

The high cliffs of the Judean Desert, the dizzying drops and hidden ravines appear to have been places of refuge.in times of danger. “And in one period in human history, families fled to the caves in the Judean Desert, and we really don’t know anything else,” said Ofer Sion, head of the IAA’s Surveys Department.  Archaeologist Oriah Amichai went on to explain: “Relics in some of the most remote caves indicate they had carried with them their most prized possession against a time when it was safe to return to their homes. We come here and reconstruct the lives of those who didn’t survive in the end,” she said.

Several of the caves offered random finds left behind by Jewish rebels in flight at the end of the Bar Kochba Revolt, including a cache of coins minted with Jewish symbols such as a harp and a date palm, an array of arrowheads and spearheads, pieces of woven fabric, sandals and lice combs, which illustrated the everyday items taken by the fleeing Jews. Those relics provide first, priceless insights into the enigmatic lives and times prevailing in those moments of history.