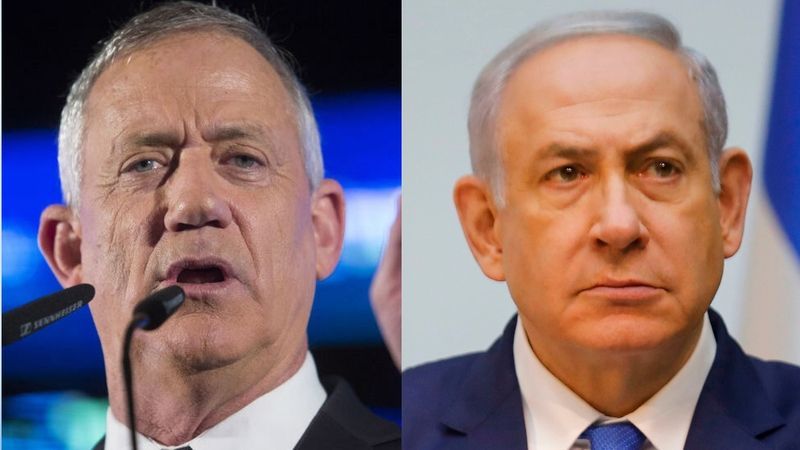 A political novice, Benny Gantz, was this week awarded the same mission impossible which earlier defeated Prime Minister Binyamin Netanyahu after the Sept. 17 election: to form a viable government coalition and so save Israel from its third general election in a year. Ganz, leader of the opposition Kachol Lavan, launched his cabinet negotiations with a dozen parties on Thursday, Oct. 24. His chances of success are negligible unless he can generate the right climate of accommodation after running a campaign focused solely on the single goal of the toppling the Likud leader, Binyamin Netanyahu,as prime minister after his 13 years in office.

His campaign was divorced entirely from demands for social, security and economic change, which many would have welcomed. Stoked by an eager media chorus, it gained enough traction to freeze the country into political deadlock and cast it onto terra incognita about the future of its governing institutions.

The last election results gave neither of the two blocs a majority. Kachol Lavon gained one seat more than Likud, but not enough for government. Netanyahu assembled a bloc of 55 Knesset members (out of 120) – still a shortfall. Gantz can count on no more 44. For his first shot at the premiership, he needs a deal with Netanyahu, and must therefore backtrack on his party’s vow never to sit in the same government as the Likud prime minister after branding him as corrupt.

With so much bad blood flowing between them, the prime minister is in no hurry to make the concessions needed for the two parties to form a unity government. He is ready to buy the format proposed by President Reuven Rivlin for parity between the two leading parties with the premiership rotating between their leaders at half term. Gantz, however, has turned it down, under pressure from his party colleagues who believe they can win the whole cake – not just a half.

Israel has had its share of political upsets in its short 71-year history. The most recent occurred in 2006, when the prime minister of the day Ariel Sharon split Likud to establish a new rival party, Kadima, which survived for three years before melting away. Likud then returned to power. All previous revolts, splits, upsets and defections sprang from controversies over issues or ideological rivalries. But the current crisis is in a class of its own: It is the outcome of a personal campaign that escalated into a crude vendetta against the sitting prime minister, members of his family and his entire circle of friends and associates. From 2016, hints and suggestions of his corruption, fed by “leaks from anonymous sources” cascaded into the public domain, until in 2019 the police stepped in to investigate. The allegations were winnowed down to three cases which the police sent to the prosecution with recommendations for indictment. But first, attorney general, Avihai Mendeblit gave Netanyahu’s lawyers a hearing of their arguments for the defense. The hearing took place last month. The AG is expected to decide by mid-December whether the prosecution cases are substantial enough to stand up in court.

Therefore, neither Netanyahu nor any of his associates has been indicted until now. The sole exception was his wife, Sarah, the charges against whom of misusing government funds and abusing staff at the prime minister’s residence, were dismissed in court. She was convicted only of a minor violation of regulations by ordering in catered meals for the residence. However, Netanyahu was so incensed that he again accused the prosecution and police of turning over every unlikely stone in a fruitless search for evidence to support their accusations. He contends consistently that they won’t find any because he is not guilty of any wrongdoing but the victim of a political witch hunt.

The criminal inculpation of the prime minister is therefore still hanging fire. Even so, Kachol Lavan was founded last February and ran for election on the pledge to throw out the “corrupt prime minister” although not his party. Gantz offered to join Likud in forming a unity government provided they kicked Netanyahu out as party leader. Countering this call for a palace revolution, Likud set up a partnership with 55 members of the rightist, nationalist and religious parties, who pledged to stand firm behind Netanyahu and are so far refusing to deal directly with Kachol Lavan except through Likud.

Few believe that another election, likely in March, will offer a pathway for Likud to transition power to Kachol Lavan, as it did for Kadima. Gantz pins his hopes on the attorney general finding solid grounds for indicting Netanyahu for graft. This would further undercut Likud’s voter support in the next election and give Kachol Lavan a good shot at a majority. Netanyahu, who celebrated his 70th birthday this week, hopes the AG will dismiss all the charges against him and vindicate his claim of victimization by political foes. Failing all else, Gantz may try and put together a minority government banking on external support from the 13 Joint Arab List members. Gantz would not then have long to sit in the prime minister’s seat since, given the radical dissonances with the Arab list, that cabinet would be short-lived.