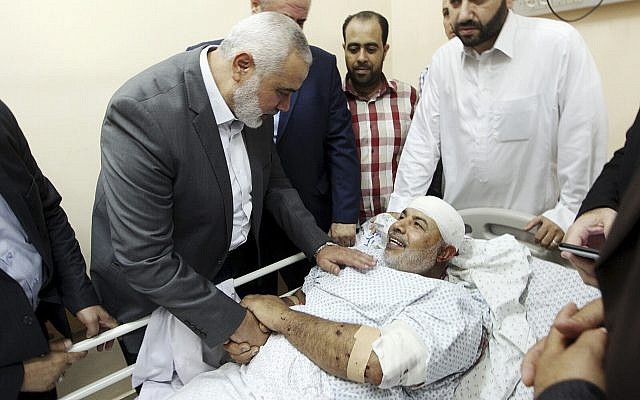 The attempt Friday, Oct. 27, to assassinate Tewfiq Abu Naim, Hamas’ security chief in the Gaza Strip was not the work of the Islamic State or its Salafist followers, but the henchmen of Hamas’ own “Interior minister,” Fathi Hamad, DEBKAfile’s exclusive intelligence and counterintelligence sources reveal.

The plot was the result of an internal feud and settling of scores within the Palestinian terrorist group.  Ismail Haniyeh other Hamas leaders knew this, but this did not stop them from blaming Israel in an attempt to keep the infighting dark.

This act of violence was touched off by the Egyptian-brokered reconciliation talks in progress in Cairo between representatives of Hamas and the Palestinian Authority. This process has sparked furious resentment among a large group of high-profile Hamas operatives. They include some of the senior officers of the military army, Ezz e-din al-Qassam.  Fathi Hamas is among the most vociferous and active of these critics. Haniyeh and other leaders in the Gaza Strip warned him repeatedly to desist from his efforts to rally active opposition to the reconciliation. When he nonetheless continued to slam the deal, they ordered Tewfiq Abu Naim to crack down on Hamadi’s followers. who quickly found themselves behind bars and their cars impounded.

Fathi Hamas struck back by ordering his henchman to go after Abu Naim. They went ahead and planted an explosive device in his car when it was parked outside the Nuseirat refugee camp Friday.
The target returned to his car after praying and when he opened the car door, he was hit by an explosion. Abu Naim was injured but survived the attack on his life
Our counterterrorism sources note that Fathi Hamad makes a habit of liquidating rivals in his own organization. His first victim was Mazen Fuqa’a, an officer in Hamas’ armed wing whom Hamad wanted to get rid of. He was accordingly murdered on March 24. Then, too, Hamas blamed Israel for the hit.

3 thoughts on “DEBKAfile: The hit on Hamas’ security chief was an inside job”