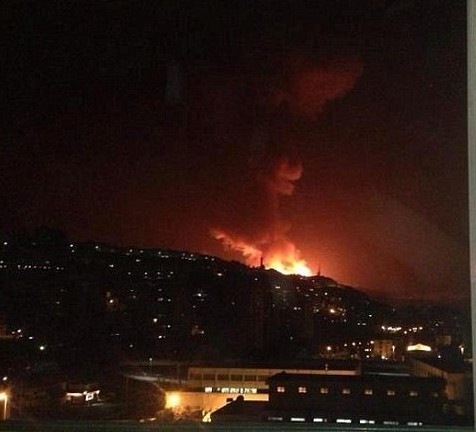 Israeli warplanes were alleged to have struck targets near Damascus early Monday, April 27, hours after Defense Minister Naftali Bennett said: “Keep yours ears open. We have moved from containing Iran’s military presence in Syria to expulsion.”

After the reported attack on Monday, the Israeli planes were described as having loosed the missiles from low altitudes over southern Lebanon. The opposition TV station Halab Today reported loud explosions and continuous ambulance traffic for an hour before Syrian air defenses began responding.

Sunday night, Defense Minister Naftali Bennett stressed: “We are not only continuing to contain Iran’s military footprint in Syria but have moved categorially to a strategy of expulsion. Keep your ears cocked,” he said. “Iran doesn’t rest for a moment, but neither do we. For Tehran, this is an adventure a thousand kilometers from home; for us it is life,” Bennett went on to say: “And so we are more determined than ever not to allow Iran to set up a forward base against us in Syria.”

DEBKAfile adds: It was to Syria – even before Baghdad – that Gen. Esmail Qa’ani’s made his first foreign visit after succeeding the late Qassem Soleimani as Al Qods chief – evidence of Iran’s continuing focus on maintaining that forward base. Qa’ani inspected Iranian assets in the northern town of Aleppo.