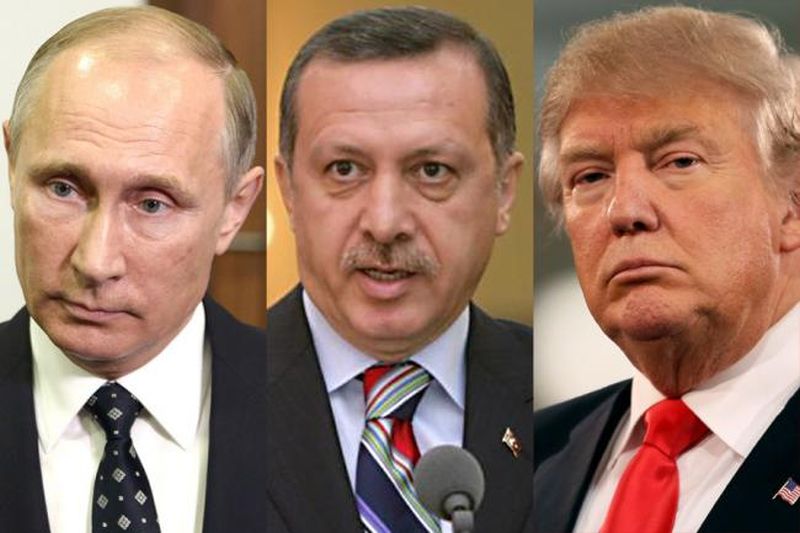 US-Russian coordination for holding back Turkey’s operation against Syria’s Kurds goes forward smoothly amid a flurry of talks. On Tuesday, Oct. 15, the US secretary of state held talks with his Russian counterpart, as did the two defense chiefs. That night, Turkish President Recep Erdogan held phone conversations with both US President Donald Trump and Russia’s Vladimir Putin.
Putin invited him to visit Moscow before the end of October, while Trump informed him that Vice President Mike Pence and Secretary Mike Pompeo would be arriving in Ankara on Thursday, Oct. 17. They would be coming with national security adviser Robert O’Brien and special Syrian envoy James Jeffrey. Erdogan was quoted as refusing to receive the Vice President, but the highly volatile Turkish leader may have backtracked on this snub.

Very little was disclosed about the content of this burst of high wire parleys. DEBKAfile’s sources have learned that Putin warned Erdogan that if the Turkish army attacked the Syrian forces which arrived to defend Kurdish districts against a Turkish onslaught, the Russian air force would intervene.

Trump is believed to have focused his warning against a Turkish assault on the key SDF-held town of Kobani and its environs. He demanded a pledge from Erdogan to stop his forces and allied Syrian militias from entering this town and to halt attempts to seize control of the strategic M4 highway. The Turkish leader demanded as a quid pro quo that the US president guarantee that the Syrian forces not far from Kobani won’t enter the town. However, since Moscow holds the whip hand over the Syria army, it was necessary for the American and Russian foreign and defense ministers to confer on this. For now, the SDF retains control of the town, shielded by Russian special forces.
Erdogan finds his troop movements increasingly constricted by the tough dictates coming at him from Washington and Moscow. They are operating in concert in a still unpredictable, inflammable situation.

The coming DEBKA Weekly (for subscribers) out on Friday, Oct. 16 explores the extraordinary US-Russian teamwork ongoing over Erdogan’s Syria enterprise and its epic impact on the regional balance of power. To subscribe, click here.

59 thoughts on “Despite Erdogan’s bravado, his Syrian offensive is squeezed in a US-Russian hug”