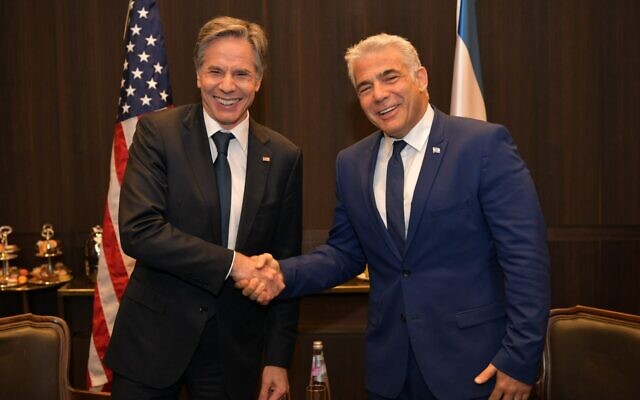 The well-oiled hype around the foreign ministers’ conference taking place on 27-28 of March at the Negev Sde Boker kibbutz was unexpectedly interrupted on Sunday night when ISIS gunmen shot dead two police officers in the Israeli town of Hadera. After condemning the terrorist violence, the top US, United Arab Emirates, Bahrain, Moroccan and Egyptian diplomats carried on with their program the next day.

Their host, foreign minister Yair Lapid, and his guests did their best to pump up a spirit of cordial camaraderie and a sense of historic occasion for the unique public coming together of four Arab foreign ministers – the UAE’s Sheikh Abdullah Bin Zayed; Bahrain’s Dr. Abdullatif bin Rashid Al Zayani; Morocco’s Nasser Bourita; and Egypt’s Sameh Shoukry – with their Israeli counterpart and US Secretary of State Antony Blinken at the desert home of Israel’s founder, David Ben Gurion.

However, contrary to custom in such events, no joint communique was issued, only separate speeches by each of the participants. As a public image-serving spectacle, the event worked for all its participants. But tellingly, they all stepped carefully away from the elephant in the room, Iran – least of all, mention of the dreaded Revolutionary Guards Corps, lest they mar the display of shared unity on the Iran nuclear issue.

Saudi Arabia’s absence gave the game away. Riyadh had no intention of playing the game underlying the Negev Summit and providing the Biden administration with regional support for its plan to negotiate a revived nuclear deal with Iran and possibly de-list the Guards as terrorist group to achieve it.

Secretary Blinken, unwilling to let Riyadh get away with staying aloof, picked up the phone to Saudi Foreign Minister Prince Faisal bin Farhan as soon as the conference was over, to try and extract a mark of support. This did not go well. The Saudi media said why in blunt terms: “Blinken used this occasion to paper over the rift that the nuclear deal has created by presenting an image of regional solidarity, but the region is not deceived.”

Local editorials stressed cynically that when Blinken was traveling to the Middle East, the Iran-backed Yemen Houthi rebels were bombing Saudi oil facilities at Jeddah, Ras Tanura and Rabigh.

Following the Russian invasion of Ukraine, Saudi de facto ruler, Crown Prince Muhammed bin Salman, pointedly snubbed President Joe Biden when he tried to get the oil kingdom to step up energy supplies to cool soaring prices. The Saudis had, moreover, not forgotten the Biden administration’s decision to withhold defensive weapons from the kingdom. “After all, if a friend goes back on promises to ‘balance’ your needs with the needs of your enemies, it seems fair to conclude that he is no longer very interested in being your friend,” their media pointed out.

The Al Arabiya newspaper took this complaint even further this week, declaring: “Instead of friendship, America seems more inclined to use its old friends as human shields for Iran.” This publication would not have used this language without the throne’s approval.

For Riyadh, therefore, the “Negev Summit” – far from being a setback and deterrent to Iranian aggression, had the reverse effect of encouraging Tehran to press even harder for concessions as the price for accepting a nuclear deal.

On Tuesday meanwhile, Gulf Arab states were gathering for an urgent summit following efforts by the UN and other diplomats to obtain a truce in the Yemen war for the Muslim Ramadan which is expected to start over this coming weekend. Yemen’s country’s Houthi rebels are boycotting because its venue is in Saudi Arabia