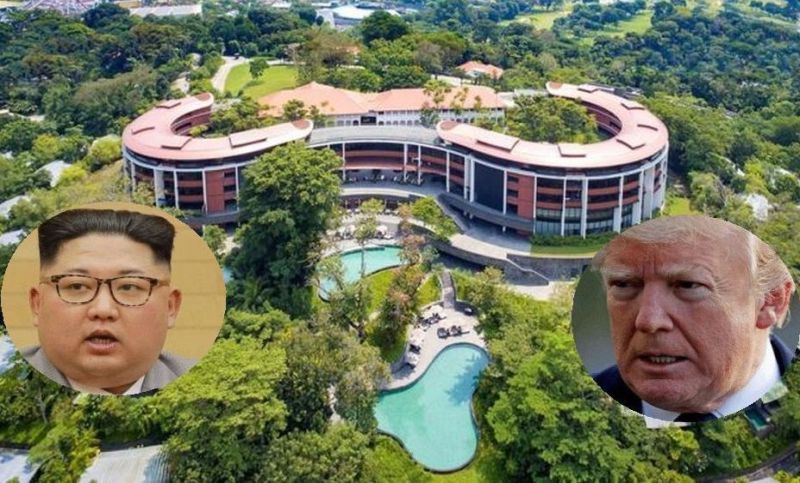 North Korea’s Kim Jong-un was the world’s most widely shunned leader before a date for a summit with President Donald Trump rescued him from the status of pariah. Suddenly, he is an ardently sought-after partner for more world summits. So much so, that he may be tempted to outsmart the US president as the clock ticks for their epic rendezvous at the Capella Hotel on Singapore’s Sentosa Island at 9,00 am on June 12, Singapore time, 23.00 pm on June 11, US Eastern time.

Still, despite his notorious unpredictability, it is generally assumed in Washington that the stakes are too high for the North Korean dictator to derail the summit in advance. They expect him to arrive on time and behave nicely. A quiet, dignified conversation with the US president will be followed by a historic photo op amid the regulation smiles and handshake.

“That’s not the Kim Jong-un we know,” a member of the US team preparing the Singapore summit grumbled, but then remarked, “Who really knows him?”

One possible surprise has already been widely aired. On Sunday, June 3, a report came out of the blue that the Syrian ruler Bashar Assad is planning to visit Kim Jong-un for what would be Kim’s first summit with a foreign head of state (not counting China’s president). The date was left open, but the North Korean Central News Agency quoted Assad as saying when the new North Korean ambassador presented his credentials: “I am going to visit the DPRK and HE Kim Kong un: The world welcomes the remarkable events in the Korean Peninsula brought about recently by the outstanding political caliber and leadership of HE KIM Jong-un,” Assad is said to have gushed. “I am sure that he will achieve the final victory and realize the reunification of Korea without fail.”

After all, it was Kim’s father who built a plutonium reactor for Iran in the northern Syrian desert and, in the past four years, the Kim regime has sent 17 ships laden with materials and components for assembling the chemical weapons with which Assad has poisoned his people. No one can be sure that Assad won’t turn up in Pyongyang on Saturday, June 6 or Sunday June 10 – simply to beat Trump to the draw. He would only need to spend a couple of hours in the North Korean capital and then return home, or even carry on to Beijing to meet President Xi Jinping. President Trump may grit his teeth to find himself following in the Syrian dictator’s footsteps, if this happens.

Assad may even be chosen as a pawn in a gambit cooked up by President Vladimir Putin and dropped in Pyongyang by Foreign Minister Sergei Lavrov during his unannounced visit to Pyongyang last week. Lavrov carried an invitation for Kim Jong-un to visit Moscow, thus making Russia the next major world power to seek – guess what? – a summit with the North Korean ruler. “Come to Russia,” he said. “We would be very happy to see you,” He also conveyed to Kim President Putin’s “warmest regards and best wishes.”

Kremlin spokesman Dmitry Peskov affirmed that Kim may visit Russia for the economic taking place in Vladivostok in September, “although the details are yet to be worked out through diplomatic channels.” Moscow is offering him his first appearance at a world forum as a kosher world leader.

Putin is clearly itching to get his foot through the North Korean door and, like Beijing, contain the spread of US influence in East Asia. They are keen to at least stamp their mark on the two processes that President Trump is expected to seal next Monday in Singapore: the Korean peninsula’s approaching denuclearization and the peace process for ending the Korean war

Little has been said about the proliferation issue in the light of North Korea’s sharing of nuclear and missile technology with Iran for years, from the outset of the latter’s programs. Trump will no doubt want to be sure that Kim puts a stop to sharing those secrets and prohibited materials with Tehran.

The juxtaposition is therefore intriguing of the order given by Iran’s supreme leader Ayatollah Ali Khamenei on Monday June 4, eight days before the Trump-Kim summit, for his country’s energy agency to prepare to “upgrade our [uranium] enrichment capacity.” The next day, Iran notified the UN nuclear watchdog in Vienna of its decision to increase uranium (UF6) enrichment capacity in response to the US exit from the 2015 nuclear accord with world powers.

Does Khamenei’s action indicate that the two rogue states are still in cahoots for putting a spoke in the American wheel? Khamenei’s action put President Trump on the spot. Letting Iran get away with it, may weaken his hand for his first interview with the North Korean leader. If Kim takes the line that what is permissible for Iran is par for Pyongyang, this would undercut the US president’s entire purpose in holding the meeting, which is to focus on the complete denuclearization of the peninsula. He is capable of walking out if Kim plays games.

On the other hand, the majority view in Washington is that the North Korean dictator will not want to miss his big chance of a path to legitimacy with security for his regime, and so the first Trump-Kim interview will go smoothly, and the trouble will come later. Every effort was made on both sides to clear surprises, snags and pitfalls out of the way forward, with the visit by Kim’s right hand, the former spy chief Gen. Kim Yong Choi, to the White House, Secretary of State Mike Pompeo’s trips to Pyongyang, and even possibly the top North Korean military reshuffle. The US president has made it clear that the North’s nuclear program must be verifiably and completely dismantled before sanctions are lifted and Kim gets his rewards. But, despite Pyongyang’s goodwill gestures and exhaustive US preparations for the pivotal summit, the North Korean ruler remains an enigma and the last word ultimately rests with him.