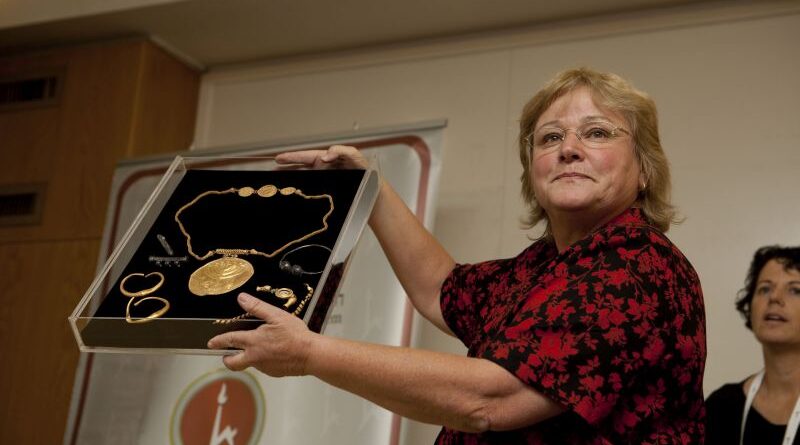 A third generation of Jerusalem archeology, Dr. Eilat Mazar died on Tuesday at the age of 65. In numerous works on her remarkable finds in the City of David and the Ophel, an area bridging that site to Temple Mt., Eilat Mazar stood firmly by the evidential data of their Biblical provenance. She was also noted for her battle against the political Islamization of Temple Mt. and its shrines, which culminated in the excavation and trashing by the Waqf Moslem Authority of First and Second Temple relics existing under the surface.

Among her most spectacular finds were a treasure trove of 50 gold coins dating back 1,400 years to the Persian conquest, including a gold medallion bearing the symbol of the Temple Menorah. Another was a clay seal inscribed with the name “Hezekiah”, possibly a Judean king of that name. She identified a wall in the Ophel area as having been built by King Solomon. One of Eilat Mazar’s books was devoted to her discovery of a large stone structure in the City of David which she maintained was the relic of his royal palace.

Granddaughter of the late Prof. Benjamin Mazar, President of the Hebrew University and one of the fathers of Israeli archeology, she devoted five of her 10 books to his epic excavations after the 1967 war – in which she took part – under the southern part of the Temple Mt platform. The professor identified the massive, engraved columns he uncovered there as the southern portal of the Jewish Temple. This contention was later challenged by Muslim researchers who claimed the columns were the work of the Muslim Omayyad conquest of Jerusalem rather than Herodian structures. This contention was fiercely challenged by his daughter and other prominent researchers.