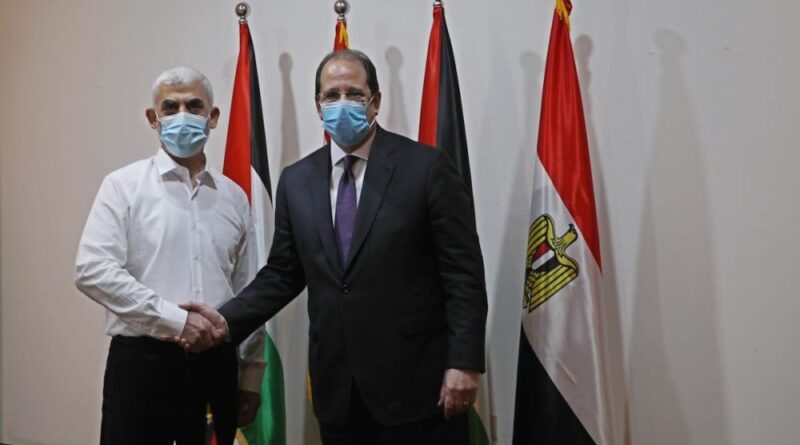 With Hamas threats pouring out at the rate of one a day, Israel’s military charges Egypt’s General Intelligence chief Gen. Abbas Kamal of playing a double game when he brokered the ceasefire deal between Israel and Hamas, endorsed by the US and Qatar. That ceasefire ended the IDF operation to halt the Palestinian rocket blitz from the Gaza Strip and was supposed to decelerate the high tension over Gaza. However, under Israel’s eye, Gen. Kamal is systematically undoing the IDF’s gains in that operation and allowing Hamas leaders free rein. A security source, cited by DEBKAfile, accused the Egyptian general of all-round cheating and harboring ulterior motives:

Military sources are not sure if General Kamal is acting on President Sisi’s orders or as a lone agent with silent presidential approval.  But Cairo exceeded every bound of credibility as an honest broker when on Friday June 4, Egyptian state television depicted scores of heavy engineering equipment and convoys of trucks laden with building materials bound for the Gaza Strip on the orders of President Sisi. This traffic was described officially as destined for reconstructing the damage wrought by Israel’s bombardment.

Our sources report that these convoys have for the last 10 days been making their way from Port Said across Sinai to the Gaza Strip. Their freight includes equipment and lengths of piping cut to size for use in the Hamas workshops that are replenishing its stocks of rockets that were depleted by more than 4,000 fired into Israel’s towns and villages.

For faster delivery, the intelligence chief has opened up the new “The Saladin Crossing” which is situated near Kerem Shalom which Israel controls. The Israeli military pointed to Cairo’s double game on this score too. While shutting down Hamas; arms smuggling tunnels through Sinai, Egypt has now opened a new route to supply the Palestinian terrorist rulers of Gaza with the same items.

On Saturday, June 5, Hamas leader Yahya Sinwar was emboldened to issue a new threat. “If the confrontation with Israel erupts anew – the Middle East will assume a new shape.”  He went on to claim that Hamas and the Islamic Jihad had used up no more than 50 percent of their tools of war and capabilities in the last bout of warfare and threatened to “flatten Tel Aviv like a carpet.”

DEBKAfile’s military sources note that while Sinwar is filmed running through the streets of Gaza and issuing threats, no other member of Hamas’s military or political leadership has yet shown his face outside their bunkers and underground command rooms in three weeks, even after the ceasefire. They went into hiding on May 10 straight after Hamas fired the salvo against Jerusalem that sparked Israel’scounter-rocket operation.

Our Washington sources add: Defense Minister Benny Gantz discovered during his meetings on Thursday with Defense Secretary Lloyd Austin, Secretary of State Antony Blinken and national security adviser Jake Sullivan, that the Biden administration has no wish to be involved in the Gaza impasse. Qatar, too, the source of regular funding for the Gaza Strip, is pulling out – the halt in the flow of cash drew another Hamas threat to renew its attacks on Israel.  Palestinian Authority Chairman Mahmoud Abbas has also given up on Hamas.

For all these reasons, the Israel-Hamas ceasefire is far from robust and liable to break down at any moment,