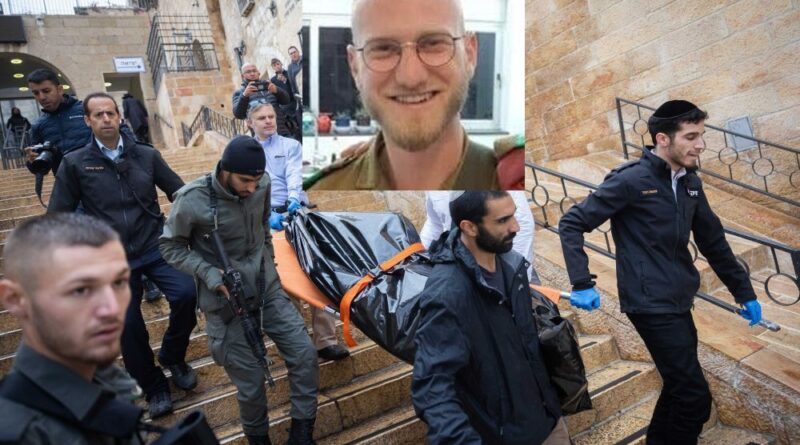 That all parts of Hamas are dedicated to a war of terror on all Jews was tragically borne out by the murder of Eliyahu David Kay, 26, by a Muslim cleric, Fada Ab Shahidam, 42, on Sunday, Nov. 21, in the Old City of Jerusalem. Months of planning led up to the moment when the terrorist, a teacher at a municipal-funded school, whipped out a sub-machine gun from under his robes and gunned down Jewish passersby.in the ancient streets. He had concealed more firearms and a knife ready to murder as many Jews as he could. The planned massacre was abruptly halted after 32 seconds when two female Border Guards officers shot the terrorist dead. It was too late3 to save Kay’s life – he was pronounced dead of a head injury on arrival at Hadassah hospital on Mt Scopus – or another two civilians and two police officers from injury. All were recovering in hospital by Monday morning.

Eliyahu Kay was a recent immigrant from South Africa, who served in a paratroop unit during his military service. He was living in Modiin and working as a tourist guide at the Western Wall when he was felled by a terrorist’s bullet.

His killer, a teacher who turned up every morning at a Muslim school on Temple Mount, never came under suspicion as a terrorist. He was able to lay his genocidal plans in secret, except for sending his wife away to Jordan three days earlier to save her from the coming turmoil. And indeed, when police arrived at Shoafat refugee camp in East Jerusalem to detain suspected collaborators at his place of residence, they were met with a fiercely hostile riot. “We are still at war,” a young Palestinian shouted to an Israeli broadcaster. “Hamas is everywhere.”

Hamas headquarters in the Gaza Strip were quick to acknowledge Shahidam as one of its leaders in Jerusalem and laud him as “a martyr in the continuing battle for driving the foreign conqueror out of the holy city.” Hamas added:  “Our young men will never surrender until our land and holy places are liberated.”

The Palestinian Islamic Jihad added its voice to praising “the act of heroism performed in Al Quds [Jerusalem].”