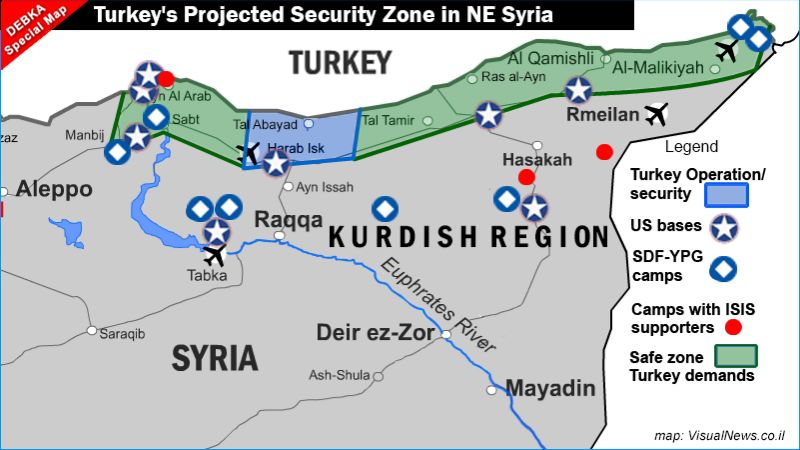 Turkish President Recep Erdogan’s blunt pugnaciousness is laced with a measure of caution. Therefore, before launching his military “offensive” in northeastern Syria on Wednesday, Oct. 9, he checked with Presidents Donald Trump and Vladimir Putin. He ran his plans past both presidents in personal phone calls and through secret emissaries, whom he kept to-ing and fro-ing between Ankara, Moscow and Washington, to make certain that Turkish troops would not run foul of the Syrian policies of either power.

DEBKA Weekly’s military and intelligence sources report that this was no easy task. He needed to convince Trump that in a potential flareup in the northeast, the Russians would not use the opportunity to push the Americans out of the dozen bases they have scattered there.

Our Moscow sources confirm that Putin declined to provide any such undertaking because it runs contrary to his fundamental policy tenet, which declares all parts of Syria sovereign territory for the Assad regime and rules the uninvited US military presence there illegitimate. To accentuate this point, Moscow, in the course of the trilateral negotiations with Ankara and Washington, moved a contingent of Russia armored special forces to a point north of Aleppo. They are being held ready to move into Kurdish territory east of the Euphrates at short notice.

Trump, for his part, stipulated to Erdogan that if he can obtain Putin’s promise to keep those troops where they are, the Pentagon would be ready to pull a small number of US troops back from two positions. This opened the way for a limited Turkish force to go in and realize Ankara’s goal, which is to stretch a safe zone strip along 100km of the Syrian-Turkish border, 30km deep inside Syria (see attached map.)

But the US president firmly informed Erdogan that he was dead against a broad Turkish ground-air force offensive against the Syrian Defense Forces (SDF), of which the Kurdish YPG is the core. To make sure the Turks stayed in line, he directed the Pentagon on Tuesday, Oct. 8, to disconnect Turkish forces from US command and control operations (CAOC) in the region and the Intelligence, Surveillance and Reconnaissance (ISR) Research Task Force. This cutoff hobbles the Turkish air force’s operations over Syria and any other skies outside Turkey.

Because of this US clamp, the Turkish air force had to strike Kurdish sites on Wednesday without crossing into Syria. And Turkish ground troops went into northern Syria on Wednesday night without air force cover, only to be beaten back by Kurdish fighters.They still remain tied down in place in the absence of air and helicopter support. Furthermore, shortly before the Turkish operation, a small force of US Marines aboard six armored carriers headed for Kobani, a town north of Aleppo. This was the Trump administration sending Erdogan and Putin a signal that the Russian contingent deployed nearby would not be allowed to use the Turkish operation to gain territory in northern Syria.

By the end of the week, DEBKA Weekly’s sources reported, Trump, Putin and Erdogan had come to a sort of ad hoc consensus. Turkey was permitted to conduct a limited operation in northeastern Syria, but it could be halted at any moment by a veto from Washington or Moscow. Therefore, the use of the term “military offensive” for the Turkish action was a misnomer. The hyperbole served the Turkish president to try and persuade his people that its army is on the way to conquering all northern Syria; and helped the Kurds to whip up western sympathy for a minority in grave jeopardy. But a serious offensive it is not. So far, Turkey troops have advanced into small sectors, mainly the non-Kurdish town of Tel Abyad, and do not appear to be preparing to trounce the Kurdish militia or grab their lands.

The main loser from this uncertain project is Iran. After its missile coup against the oil facilities of Saudi Arabia on Sept. 14, the Islamic regime was comporting itself as the proven master of the region. Suddenly, Tehran found itself thrust aside when a major episode was in the making on the most active Middle East front: Syria. Even Tehran’s close allies, Russia and Turkey – least of all the US – failed to consult with or even alert Iran to the Turkish operation in the works.

Attempting to put its foot down, Iran this week staged an unannounced military exercise with special forces along its border with Turkey. It attracted not the slightest notice in Washington, Moscow, Ankara – or even from the Kurds.