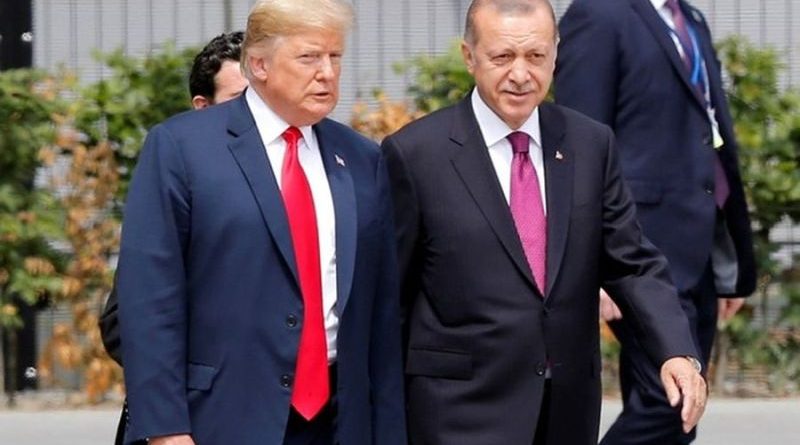 Although Turkish President Recep Erdogan walks a wavy, duplicitous line between Washington and Moscow, he somehow manages to stay in President Donald Trump’s good graces. He was, for instance, the first NATO member to shop for Russian S-400 anti-cruise missile air defense, for which the US stealth F-35 program was suspended, and when he visits Moscow every few months he and President Vladimir Putin behave like old cronies.

Yet, on another level, which rarely reaches public attention, Turkey is waging two wars against Russian interests in the two cynosures of Putin’s strategic and economic aspirations, Libya and Syria. In Syria, he cherishes the major foothold won in a key Middle East nation, while in Libya, he is reaching out for control of Libya’s oil fields and exports, to become a lead player on the world’s energy markets.

The paradox of Erogan’s double game with Moscow is the key to Trump’s embrace of the surly Turkish leader, an enigma that has puzzled many in the West.

This is how it works, say DEBKA Weekly’s military and intelligence sources: The Turkish military challenges Russia in Libya and is challenged in turn by the Russians in Syria, thereby enabling the Trump administration to play out its strategic goals in both places, without resorting to US military intervention in either.

Take for instance the drawn-out battle for the Libyan capital of Tripoli. On the face of it, this is a knock-down fight in a civil war, in which Gen. Khalifa Haftar’s Libyan National Army (LNA) is fighting to wrest the capital from the UN-recognized Libyan Government of National Accord (GNA) headed by Fayez Mustafa al-Sarraj. In actual fact, however, this conflict is being fought by foreign armies – Turkey, which backs the GNA and Russia and allies which back Gen. Haftar.

A 3,000-strong Turkish expeditionary force is fighting to defend the Tripoli government against an onslaught by a roughly equivalent Russian-cum- LNA army. This parity goes far to account for the long stalemate in the ongoing battle.

Our sources report that Turkish cargo planes land daily at Tripoli airport laden with reinforcements, drones, ordnance, different types of rockets, light and heavy artillery and armored vehicles. On the return flight, the planes carry the Turkish and Libyan wounded to hospital. The expense of this operation is partly put up by Qatar.

Most of the Russian combatants fighting with Haftar’s army are veterans of the Russian army’s special forces who serve as mercenaries in the Russian Wagner Group paramilitary organization. Under contract with President Putin’s Kremlin office and the Russian defense ministry, they are supplied by a Russian airlift of modern weaponry, rockets, artillery and ammo. A few months ago, electronic jamming equipment was added for downing Turkish aircraft. This electronic gear recently shot down an American RQ-4 Global Hawk UAV that was spying out the battlefield.

Moscow’s anti-Turkish operation in Libya is partnered by the UAE leader, Sheikh Muhammed Bin Ziyad (MbZ) and Egyptian President Abdel-Fatteh El-Sisi, who seeks a measure of stability across his country’s Libyan border.

The players in northern Syria follow a different rulebook.

Whereas in Libya, the Russian and Turkish forces are fairly evenly matched and neither prevails, in Syria, the Russian army controls the field and stamps down on Turkish military movements to prevent their incursion into lands belonging to the Syrian Democratic Forces and the Kurdish UPG militias.

On Monday, Dec. 9, President Erdogan was forced to admit that the Turkish army is finding it hard to achieve its goals in northern Syria due to obstacles which he did not identify. DEBKA Weekly’s sources can disclose that the commanders of the Russian forces in Syria are under strict orders to ensure that the Kurds stay in control of their regions. This is their award for granting Moscow military bases on their lands, especially a 49-year lease on the Qamishli airport for conversion into a Russian air base. The Russians and Kurds negotiated these contracts bilaterally without involving either the Assad regime in Damascus or Ankara.

These arrangements in Libya and Syria suit the White House in Washington perfectly. Moscow is holding Turkish troops back from seizing Libyan oil, on the one hand, while pinning the Turks to the ground in northern Syria. By acting as defenders of the Kurds, Moscow paradoxically serves a critical American interest.

This rationale cuts no ice with US lawmakers. Not satisfied with suspending Turkey from the F-35 program, the Senate Foreign Relations Committee on Wednesday advanced bipartisan legislation to punish Turkey for buying Russian anti-air S-400 systems and crimes against the Kurds. A threat of retaliation from Ankara did not deter Senator Jim Risch, the panel’s Republican chairman Senator Bob Menendez, its top Democrat, from pushing a sanctions bill. Turkish Foreign Minister Mevlut Cavusoglu’s threat included an unspecified warning about the US use of two military bases in Turkey. “The issue of the Incirlik and Kurecik bases may come on the agenda,” he said. This threat has often worked in the past to defuse crises between Washington and Ankara.