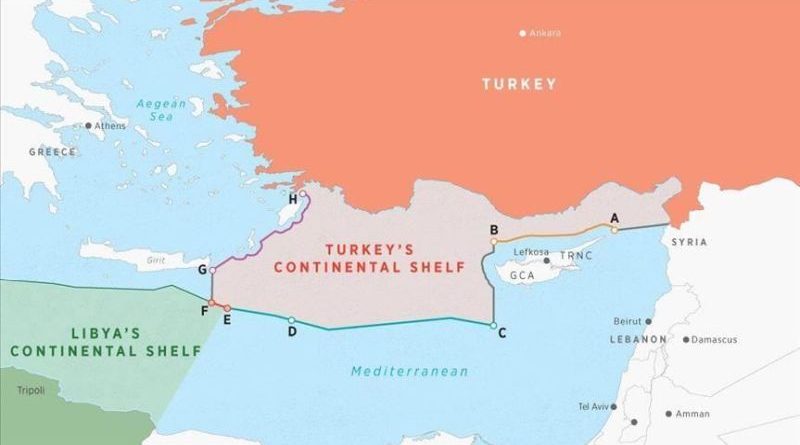 The Mediterranean region is roiling in a new tempest stirred up by two bombs tossed by Turkish President Recep Erdogan in late November in pursuit of his never-ending quest for domination. One bomb targeted the eastern and central Mediterranean waters and the other, Libya’s oilfields. While the second represents a straight bid against the big powers led by Vladimir Putin; and Donald Trump, who continues to move in on Syria’s oil fields, the first sparks the risk of tangling with Egypt, Israel, Greece, Lebanon and Syria.

The region’s natural gas reserves are estimated at around 122 trillion cubic meters in all. Israel and Egypt are in production and drilling by Cyprus has brought Turkey onto the scene as a contestant. This intervention has set up a significant tremor in regional security.

While pouring out ambitious bombast, the Turkish ruler rarely gets his way because the military force and financial resources available to him are in short supply. He was therefore forced to retreat from a determined venture to take over Kurdish regions east of the Euphrates in northeastern Syria, when Moscow and Washington pushed him back. He is also likely to find he has bit off more than he can chew in his latest hunting-ground, Libya as well, say DEBKA Weekly’s intelligence sources. However, by the time the two big powers step in to stop him, either together or apart, the Turkish army, air force and navy may be immersed for weeks or months in clashes against Egypt, Greece and Israel in the eastern Mediterranean.

They will be stoked additionally by the maritime partition accord Turkey has quietly concluded with Libya. On Nov. 27, Erdogan and Fayiz es-Serrac, Chairman of the Presidential Council of Libya, based in Tripoli, signed a bilateral “Maritime Boundary Delimitation Agreement.” It was endorsed by the Grand National Assembly of Turkey. The UN, which recognizes the Tripoli based government, will be notified after the agreement is approved by Libya.

This step, which aims at carving up the eastern Mediterranean between Turkey and Libya, is a gamechanger for the energy geopolitics of this volatile region. The two signatories have made no provision for any fellow littoral nations, such as Italy, Greece, Cyprus, Egypt or Israel; nor do they recognize those countries’ economic zones (EEZ). The Turkey-Libya pact casts an effective maritime blockade on countries like Egypt, Israel, Lebanon, Cyprus and Syria and prevents them from laying pipelines from their oil and gas fields to export their product to Europe.

It is also in direct contravention of the UN Convention on the Law of the Sea, which proposes a fair and lawful distribution of maritime resources and delimitation of maritime zone boundaries. Most disputes over economic zones have been sparked by nations pursuing policies in conflict with the fundamental principles of this Convention, such “justice”, “non-encroachment” and “equitable geographical distribution.”

None of these principles concern the Turkish ruler or deter him from going after his objectives.

To give his deal with Libya muscle, the Turkish army on Sunday, Dec. 15, began sending drones to a base in the Turkish Republic of Northern Cyprus. A Turkish command center was set up in Gecitkale Aiport at the northern end of the island and provided with communications equipment for the drones to secure Turkish drilling operations in the eastern Mediterranean.

Egypt responded immediately by sending its navy’s Mistral helicopter carrier and strike group to protect the gas fields in its Mediterranean economic zone.

By then, Erdogan had dropped another bomb which, too, closely concerned his latest partner-cum-target, Libya. Ankara and Tripoli secretly signed a sweeping three-year military defense pact covering the supply of every kind of weapon, military aid, training, technical support, joint exercises and intelligence information-sharing as well as the deployment of troops. At the heart of this accord was Turkey’s commitment to establish a rapid deployment force for the Tripoli-based Government of National Accord to engage its foe, Gen. Khalifa Haftar’s army, which is backed by Russia, Egypt and the United Arab Republic in the battle for the Libyan capital (as first reported in last week’s DW: Erdogan’s Double Game with Russia Makes Him Acceptable to Trump).

DEBKA Weekly’s military sources reckon that it is only a matter of time before the first dogfights between Turkish-flown warplanes and the air forces of Egypt and the UAE which are backing Haftar’s army.

Hoping to head off Erdogan’s designs, Greek Prime Minister Kyriakos Mitsotakis, who will be visiting the White House on Jan. 7, will ask Trump to throw his support behind Egypt and Greece against the Turkish-Libyan threat to their EEZ boundaries. The European Union stands by Greece and Greek Cyprus on this issue and called on Turkey to abide by the European Neighborhood Policy. US Congress has already taken steps against Erdogan with sanctions legislation and the recognition of historic Turkey’s responsibility for the Armenian genocide.

Last minute flash: In response to the stepped-up flow of Turkish troops and weapons to the Tripoli government, Egypt Thursday afternoon boosted supplies of T-72 tanks to help Haftar tilt the battle for the Libyan capital in his favor, and Egyptian air force units were placed on the ready.Egypt’s President Abdel-Fatteh El-Sisi pledged never to let any alien force take control in Tripoli.