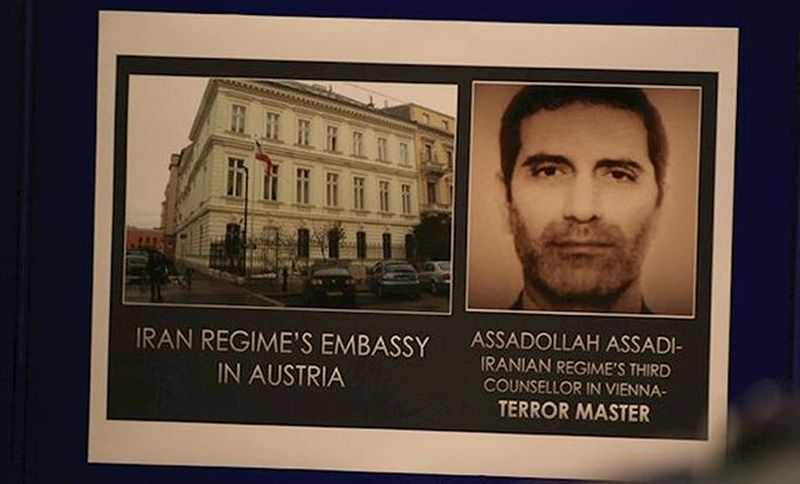 American and Israeli secret agents are busy, as never before, in chasing down Iranian clandestine operatives in Europe and exposing their nefarious activities.

On Oct. 30, Denmark recalled its ambassador from Tehran and called for fresh European Union sanctions against Iran, after a CIA/Mossad tip-off uncovered an Iranian assassination plot hatched on Danish soil. The plot was directed against an Iranian opposition leader, the head of the Arab Struggle Movement for the Liberation of Ahvaz (ASMLA), which Tehran accused of killing 25 people in a terrorist attack on Sept. 22 in Ahvaz, capital of the oil-rich Iranian province of Khuzestan. The suspected Iranian assassin was arrested by Denmark.

Iran’s real motive in this hit was to eliminate an opposition leader, DEBKA Weekly’s intelligence sources report. The Islamic State not only took responsibility for the Ahvaz attack, but was duly punished for the deed by Tehran. On Oct. 1, the Iranian Revolutionary Guards (IRGC) attacked ISIS bases in eastern Syria, claiming they had carried out a revenge assault for Ahvaz.

On Tuesday, US Secretary of State Mike Pompeo thanked the Danish government for arresting the “Iranian regime assassin.”

Another Iranian plot, foiled in time, was to blow up an opposition rally taking place outside Paris on June 30, shortly before a visit to Europe by Iranian President Hassan Rouhani. The investigation and the subsequent arrests, including the expulsion of an Iranian diplomat, became a trans-continental operation. It involved the law enforcement authorities of Austria, Luxembourg, Belgium, Germany and France, at a most inconvenient moment. European leaders were in the middle of a tough effort to persuade Tehran they were friends and willing to help Iran stand up to the Trump administration’s anti-Iran sanctions policy and the US walkout from the JCPOA (2015 nuclear deal).

This European effort prompted the US and Israel to intensify their operations to expose Iranian terrorist activity on their soil.

On Oct. 2, France’s foreign ministry was forced to admit that Iranian intelligence ministry involvement in the plot to blow up the opposition rally was beyond doubt. Paris accordingly froze assets belonging to Tehran’s intelligence services and two Iranian nationals. A Paris-based Iranian diplomat was expelled after he was exposed as an Iranian agent operating under diplomatic cover.

On Oct. 10, another Iranian diplomat, Assadollah Assadi, who was based in Vienna, was detained in Germany and extradited to Belgium. One of the diplomats sanctioned by France, Assadi, the ringleader of the plot, came before a Belgian judge on Oct. 31. He was charged with having met two agents, an Iranian émigré called Amir Saadouni and his wife, at a Luxembourg café and handing them the explosive device. Their assignment was to blow up the exiled Mujahedin-e Khalq (MEK)’s annual conference outside Paris. This group is also known as the National Council of Resistance of Iran. The conference was to have been addressed by President Trump’s lawyer Rudolf Giuliani and a number of European and Arab ex-ministers.

Acting on a Mossad tip, the couple were arrested by Belgian police on their way to the rally and a half kilo of the powerful TATP explosive found in their bags. This was the lead that unraveled the Iranian plot to blow up the MEK rally.

Although the pro-Iranian policies took a setback, neither President Emmanuel Macron nor Chancellor Angela Merkel could ignore the evidence put before them by the CIA and Mossad of an Iranian agency’s plot for the mass bombing of an Iranian opposition group’s conference attended by a close adviser of the US president and high-profile Europeans and Arabs.

In a sarcastic comment at a US Independence Day event on July 4, Israeli Prime Minister Binyamin Netanyahu mocked the Europeans for inviting President Rouhani to meet them – without the United States, “…when his regime dispatched a terrorist cell for a major terrorist action in France. The commander of the cell was an Iranian diplomat in Austria…” he said, “This Iranian terror plot was planned on the soil of Europe in the same week that European leaders were to meet the president of Iran to discuss circumventing the sanctions on Iran.”

Our intelligence sources add that, notwithstanding European leaders’ bid to smooth relations, Tehran remains deeply distrustful of their motives, convinced they are only putting on a show of rejecting Washington’s position on the nuclear deal, while delivering nothing substantial. Supreme leader Ayatollah Ali Khamenei made no bones about this when he said on Oct. 17: “…our eyes should focus mainly east. Looking west and at Europe leaves nothing for us but a waste of time, headache and humiliation.” On another occasion, Khamenei said: “You should watch things with suspicious eyes towards Europeans.” His instructions to underlings were: “Do not stop negotiations with the Europeans, but don’t expect a European package.”