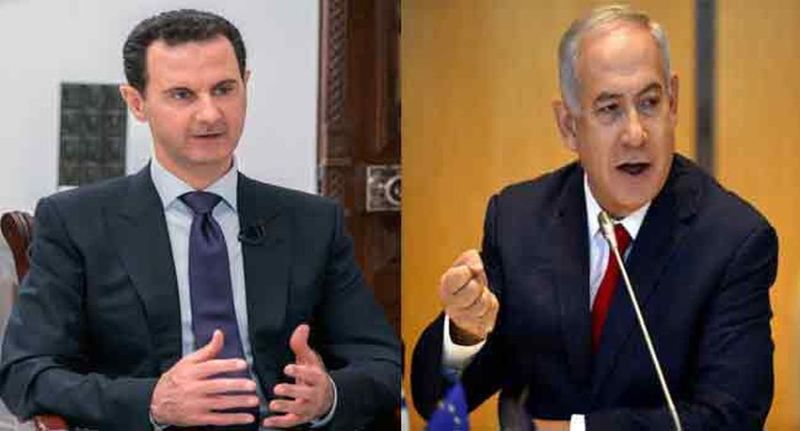 In deep hush, well below the intelligence and military radar, Israel’s Prime Minister and Defense Minister Binyamin Netanyahu and Syrian President Bashar Assad have been conducting direct conversations for some weeks, DEBKA Weekly reports exclusively from its most credible intelligence sources. Both the White House and the Kremlin are being kept in the picture, but neither President Donald Trump nor President Vladimir Putin has interfered in this extraordinary dialogue.

When Netanyahu phoned Trump on July 11, the official statement cited him as thanking the American president for imposing sanctions on Iran. But the call actually focused, our sources reveal, on the content of the prime minister’s talks with the Syrian President. He also briefed Putin when they spoke on July 8, and answered questions put to him by the Russian president.

The Israeli and Syrian leaders don’t talk often. How they communicate – whether through a mechanical or a human channel – is unknown. But our sources stress that they are talking directly for the first time. Messages were passed indirectly before the civil war erupted in 2011 and discontinued for its duration. But now, whenever either the Israeli prime minister or the Syrian president decides a matter calls for early clarification, there is a permanent means of communication available for personal contact at short notice.

Up until now, our sources report, their main subjects of discussion were military issues pertaining to their common border, including southern Syria and the divided Golan and Mount Hermon areas. From Israel’s perspective, epic progress has been made on five issues of paramount importance:

2. He undertook not to permit Iranian or Hizballah forces to operate from the Syrian border regions against targets inside Israel.

3. Damascus will keep back from the border districts Syrian army units and weapons systems including radar that may abet an aggressor in attacking Israel.

4. Iranian and Hizballah drones will be prohibited from using Syrian air space for attacking or spying on Israel.

5. Assad also promised Netanyahu that he would not let Iran plant a foothold in strategic utilities for controlling any sector of the Syrian national economy. In this regard, our sources add that he reassured the Israeli prime minister about the 25-year concession granted to Iran’s Revolutionary Guards for the management of one of Latakia port’s quays. He did not offer to cancel the concession, saying only that it would not be operational any time soon.

For Israel’s part, Netanyahu reiterated his mid-2018 commitment to presidents Trump and Putin to assist in the Assad regime’s progress towards recovery of sovereignty and military control in areas in the vicinity of their border. He told the Syrian ruler that the rebel militias and groups of southern Syria, which the IDF and Israeli intelligence had supported during the civil war, had been encouraged to transfer their allegiance to the Assad regime and its army.

An interesting facet of this dialogue is that the Syrian ruler never once referred to – or even hinted at – the running Israeli air and missile campaign against Iranian and Hizballah targets in his country. He did not ask Israel to halt those attacks or even reduce them – simply ignored the whole subject.

Washington and Jerusalem infer that Assad is after big game from his unprecedented dialogue with the prime minister – namely, Israeli influence for persuading the Trump administration to withdraw its objections to Saudi Arabia, the UAE and Qatar resuming diplomatic relations with Damascus – and most of all their economic and financial ties. Our sources have found Riyadh, Abu Dhabi and Doha gearing up for some months to start releasing funds for major projects to repair the vast devastation wrought by nine years of civil war. They were only held back by Washington.

By directly engaging the enemy, the two leaders soon found their audacious, high-wire personal engagement quickly bringing high returns for their vital interests. Assad calculates that his sympathetic approach to Israel’s security concerns will induce Netanyahu to try and soften US resistance to the large-scale Gulf investments desperately needed for Syria’s recovery. Neither of his wartime allies, Moscow or Tehran, can generate the mega-bucks needed to put Syria back on its feet. The only sources around are the Gulf oil emirates.

The low-ranking Iranian diplomat who came running to Damascus on Monday, July 15, to find out what Assad was up to, was greeted with his assurance of undying friendship for and affinity with the Islamic Republic, and gratitude for helping to save the Damascus regime from a dangerous insurgency. However, the Iranian and Syrian statements on their talks confined the scope of their solidarity to one common enemy, the United States. Their omission of any Middle East antagonist spoke volumes. The messenger, Hossein Amir Abdollahian, assistant speaker for international affairs at Iran’s Shura Council, was left in no doubt that the Syrian ruler had shifted ground and was in full flight of a hunt for the fabulous sums needed for Syria’s post-war recovery.

Netanyahu grabbed a historic opportunity, however long it may last, to pacify Israel’s northern border and neutralize the Iranian-Hizballah menace from their key Syrian front. As defense minister, he may be able to stand down Israel’s longstanding war preparations on the threatening Syrian border without risking a direct armed conflict. And to nail Assad’s commitments, the flow of financial aid from the oil states may be adjusted to the level of his compliance with the pledges he offered to preserve peace on their border.